Last year, I had an ambitious multi-part Fatima post series that I never finished. Truth be told, I’ve had a project about twenty years collecting tidbits and collating information. I’ve never been satisfied that “Marxist atheism” adequately describes the errors of Russia in the context of Fatima’s warning that “Russia will spread her errors throughout the world.”  See, Marxist atheism is an effect of the errors. The underlying mess is a bit rougher and takes more shape with some history.

Marx himself had a pact with the devil. But to call him a satanist does not work today because people think that’s a cliche. It is literal, however… the guy worshipped Satan. Dostoevsky said it best at the end of Demons,

“Tell me the story of the man at the land of the Gerasenes…   that’s my Russia!
Full of devils!
But the Lord will come someday and drive the devils back and back into the sea!
And Russia will become good again, sit at His footstool, and relearn His Gospels.”

Amen. Fulton Sheen liked to recite that quote, too.

But who were the devils of whom Dostoevsky spoke? Nihilism had ravaged 19th century Russia and left some strange characters. Helena Blavatsky, for instance, who travelled to Tibet to study the occult monks, and went to England to be with Alistair Crowley, and travelled the world spreading a false gospel that saw Jesus as an incarnation of an avatar christ that reincarnates. She even went to Germany to help the Thule Society with her false doctrines, and the Thule Society was the force that pushed Hitler into power.

Blavatsky had ideas about eugenics and secret bloodlines and an aryan race that would emerge to rule the world.

But, Russia itself had ideas of its errors. The Russian Orthodox Church knew very well. So did the Czar (Tsar). In 1902, there was a new edition of the Anathema Service issued. Every year in Great Lent, on the first Sunday thereof, the Churches have what is known as the Anathema Service during which the people implore God to have mercy on them and send the graces necessary to bring people to true conversion and stamp out error.

I got a copy of an English translation of that Service years ago. When I first got this, I didn’t understand what the Service was like.  I do have a better understanding now. This would be a service expected throughout the Russian Orthodox churches.

This says it all, that is, who Russia thought were her errors: 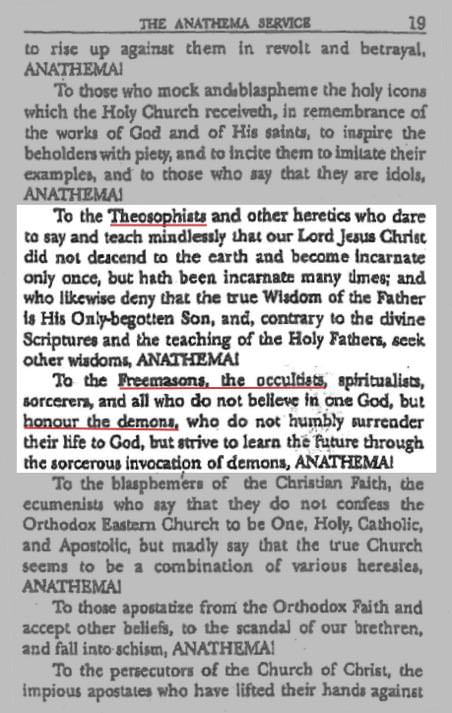 That’s what Russia thought her errors were:

Notably, the next error is “ecumenists” who “madly say that the true Church seems to be a combination of various heresies”.

We can trace these out into our own time and in our very parishes. Have you seen these errors? Seen a young person extolling druidism, wicca, or channeling? Heard a young person expound reincarnation yet? Had a pastor tell you that many faiths lead to God?

Our Lady of Fatima, Pray for us!

This article, The Errors of Russia… Occultism, Theosophy, demon worship is a post from The Bellarmine Forum.
https://bellarmineforum.org/the-errors-of-russia-occultism-theosophy-demon-worship/
Do not repost the entire article without written permission. Reasonable excerpts may be reposted so long as it is linked to this page.