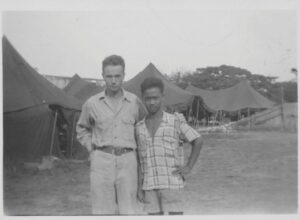 Some battles are fought hand-to-hand; others with rifles and bombs. There is open combat, guerrilla warfare, and insidious deals behind closed doors. Frank Morriss will be remembered in none of these venues, but as a warrior all the same. Frank — author, mentor, teacher, family man — was a word warrior, using faith and reason to promote and defend the teachings of the Catholic Church for close to 65 years.

An ordinary biography will show a layman committed to Catholic journalism — Denver Catholic Register, National Catholic Register, Vermont Catholic Tribune, Twin Circle — using his talents to build up the Kingdom. And all of that is true, but as the years rolled by, the building came about in extraordinary ways.

A tsunami of political and cultural change hit society in the 1960s and it was no different for the Catholic Church. Misinterpretations of the Second Vatican Council ushered in an age of apostasy and peril for ordinary Catholics. Someone had to speak for the Church and all that had gone before in truth and grace. That someone was Frank Morriss who brought powerful and intelligent arguments to the battlefield for souls. Let William F. Buckley and later Pat Buchanan be the front men for the conservative cause. Frank was ahead of the game with books like The Catholic as Citizen and The Conservative Imperative which showed that it was possible to serve one’s country while serving God. A Neglected Glory, The Catholic Church in America, showed how important Catholicism had been to a nation at the time hell-bent on shoving God out of public view. Frank understood what turmoil ordinary Catholics felt at that time and addressed issue after issue, first as a syndicated columnist and then for 40 years as contributing editor to The Wanderer newspaper. The old manual typewriter never ceased.

Living life as a faithful Catholic was Frank’s vocation, and helping others to do so was his passion. A premier example of this is The Divine Epic, a series of taped lectures available for discussion groups. Frank wrote the script of this history of the Catholic Church, which included explanation of the documents of the Second Vatican Council. Published by Prow, The Divine Epic shored up pride in the achievements of the Church and fostered Catholic identity. It was easy to read, faithful to the Council Fathers, and one of the few books from the time with a reliable account of what the Council wanted to achieve. The Bellarmine Forum Magazine made use of chapters of this book in its 2013 issues on Vatican II.

It should surprise no one that when the Wanderer Forum Foundation decided to branch out from its annual meetings (the salvation of persecuted orthodox Catholics in America since 1965) to the publication arena, Frank Morriss was selected as the editor of the Forum newsletter. Frank and Wanderer Forum founder, Laurene Conner, wrote the newsletters which were dedicated to providing much-needed documentation on topics that were clear and present dangers to the Faith: feminism; feminizing the liturgy; Fr. Richard McBrien’s book Catholicism; the Campaign for Human Development; liberation theology; radical nuns; derailed social teachings.

As I assumed duties as the Wanderer Forum Foundation secretary and editor of the Forum Focus several years later, Frank Morriss could be counted on the present the teachings of the Church on any topic, for any venue. He lived and breathed it.

“Frank, I need an article on celibacy for the Forum Focus.”
“I’ll see what I can do.”

And he did it well.
Seeing another societal earthquake in the making in 2007, the Wanderer Forum Foundation published the book, Saving Christian Marriage based on the talks given at its 1973 Forum conference, “The Splendor of Christian Marriage.” One topic heretofore unthinkable needed to be added to the line-up: same-sex marriage.

And thus we added “Same Sex Marriage: When Two Can Never Be One” to the pages. This chapter is now featured on this very website.

Frank’s love for language can be seen in his own elegant prose. He always believed words conveyed meaning and nowhere more importantly than in the liturgy of the Catholic Church. The banal translation of the Mass after Vatican II, the attempts to feminize then neuter references to God were evil to him and a danger to the Faith. As he wrote in the Forum Focus in 2002, “Change the exact meaning of the words of the Liturgy and we are in danger of using the Liturgy to tell falsehoods about the Divinity….And that cannot be allowed.”

It was in his book, Francis Thompson–A Reflection on the Poetic Vocation (2008) that Frank’s skill to use prose to express the Faith was brilliantly displayed, particularly in explaining the “The Hound of Heaven.” He understood Thompson as only a fellow artist could, how the message the words convey is more inspiration than a product of human effort or thought. Frank described certain primitive tribes whose messengers

“carried messages consigned to them in the split ends of long sticks. They do not touch the message inscribed on the paper…The message is not theirs, only delivered by them. Untouched by them, it can only arrive as they received it….The poet has [a] vision others do not have and it is his vocation to present the message of that vision to those who would otherwise not ever know it….He must offer that message unchanged, unattentuated, complete” as it was given (Francis Thompson, p.129).

So, too, Frank Morriss, conveyer of the unchanged message of the Catholic Faith.

In Corinthians (I Cor. 1:10-17), St. Paul describes quarrelling among the faithful about who followed which disciple — Paul, Cephas, Apollos. Paul asked, “Has Christ then been divided into parts?” For Frank Morriss there was no question of following the spirit of Vatican II or an archbishop leading into schism or others calling for women priests. The Church is one and he used his pen to defend it to his last days. He fought the good fight and his written words remain as witness.

May he rest in peace.

This article, Thoughts about Frank Morriss is a post from The Bellarmine Forum.
https://bellarmineforum.org/thoughts-about-frank-morriss/
Do not repost the entire article without written permission. Reasonable excerpts may be reposted so long as it is linked to this page.