To Restore What Has Been Seized Unjustly

If the Christian Religion forbade war altogether, those who sought salutary advice in the Gospel would rather have been counseled to cast aside their arms, and to give up soldiering altogether.   On the contrary, they were told: “Do violence to no man, neither accuse any falsely, and be content with your wages,” the command to be content with their wages manifestly implying no prohibition to continue in the service.”–St. Augustine, Letter to Marcellinus 138, ch. 2, n. 15.

The current massacre of Christians and other religious minorities in Iraq demonstrates a clarion call to the Catholic conscience to examine once again the duty of charity which may include waging war. I have written previously on this topic and it seems that it is now fresh for a new application. Augustine and Aquinas, the twin towers of Catholic theological and moral thought, have outlined for us the conditions necessary for a just war. The Church’s Supreme Magisterium has adopted these conditions and any contemplation of military action with its concomitant issues must rigorously apply these very conditions. It is interesting to hear the Church’s supreme authority in recent days articulate the absolute evil being perpetrated by these Muslims against the innocents of a 2,000 year Christian community. Likewise, the Catholic Chaldean Patriarch has not been shy about requesting the need for military intervention. So how can we apply the principles of the duty of charity that may include the waging of war to this situation? Secondly, is it in our nation’s interest to do this? Does the intervention of the United States make sense?

First and foremost, it must be acknowledged that a short article such as this will not do justice to all the issues involved or the questions that must be asked prior to committing military personnel to action. War as traditionally understood, and as defined by modern legal definitions, involves nations; yet, since 9/11, we have seen conflicts that don’t involve nations per se but radical Muslim elements. ISIS is but the latest of these theologically-driven terror organizations. Perhaps the situation in Iraq could be called a “civil war” or perhaps it evades definition by any category. Indeed it is an armed conflict and I think the old adage  that “if it walks like a duck…etc.,” the term may apply. That said more questions are raised when one looks at the position of the United States vis a vis the situation in Iraq. Now, to the jus ad bellum criteria which was more fully examined previously:

1. War must be declared by a due authority.

2. War must be waged for a just cause.

3. Lawful authorities must carry out war with a right intention.

In the case before us, we have to also ask the question whether the instability in Iraq–caused in large measure by the United States’s own “Operation Iraqi Freedom”–commits us to the region. Government authorities and military officials will have to do the hard work of showing the proximate causality of the United State’s 2003 intervention in Iraq to answer definitively in the decision-making process. The other question that needs to be asked is whether the United State’s military position in the world obliges us to intervene on behalf of oppressed peoples. The previous question, being more particular, may make this one irrelevant. Finally, the question must squarely be asked–as it was by Pat Buchanan–is ISIS an “existential threat” to the United States?  This last question goes right to the heart of the jus ad bellum criteria–especially point 2.

Since the horrors of the two world wars at the beginning of the last century, Catholic thought on war has taken a decidedly more pacifist tone, especially with the weapons of destruction that threaten to decimate entire nations. By the standards of most modern Catholic just war thinkers, wars of defense seem to be the only case in which a war may be declared.  Indeed, the just war doctrine is indeed still part of the Catechism and universal pacifism cannot in honesty be said to be the official teaching of the Church. Yet, with the rise of such uncivilized and barbaric terrorists such as ISIS, might it not be time to re-examine at Augustine’s and Aquinas’s original thought on the matter. Both seemed to be more expansive in their thought of when war would be justified:

A just war is wont to be described as one that avenges wrongs, when a nation or state has to be punished, for refusing to make amends for the wrongs inflicted by its subjects, or to restore what it has seized unjustly. (QQ. in Hept., qu. 10, super Jos. cited by St. Thomas Aquinas, Summa Theologiae, I-II, 40, 1.)

“Avenge” here is not to be understood as “revenge;” rather, it is retribution, the primary purpose of punishment, the setting to right a disorder created by the wrong. Again, did these pillars of Catholic theology contemplate criminals or brigands in the context of war–for this is what ISIS is. They seem rather to consider a true war something that involves nations or states. So when what more accurately may be described as an unjust insurrection is occurring within a nation and the government of said nation cannot repel the advance, is intervention by others justified? In this specific case, is intervention by the United States justified?

The most significant case against the intervention by the United States is the argument made by Buchanan versus the hawks in Congress: ISIS is not an existential threat to the United States.  Yet, in the opinion of this writer, a case can be made that the United States is partly responsible for the instability that was brought to the innocent Christians in Iraq and has a responsibility to protect them from the terror now being inflicted. While this may not properly be styled a “war of defense” for the United States itself (as Buchanan has noted), it could certainly morally be considered under Augustine and Aquinas’s rubric of “restoring what has been seized unjustly” insofar as the legitimate authority of Iraq seeks help in putting down the terror raging within its borders. Likewise, with the pleas of the Catholic Patriarch in Iraq and the non-condemnation of the Holy See at the calls for military intervention, perhaps the Catholic hierarchy sees this as a war of defense (if not under the rubric of Augustine and Aquinas). Given the posture of European nations–notwithstanding their secularism–perhaps in the face of such barbarity, there is still a tacit acknowledgment that the West is Christian and that it is deserving of defense against a resurgent Islam. 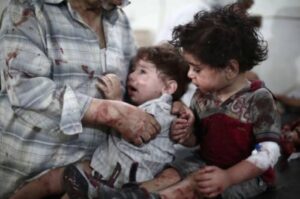 This article, To Restore What Has Been Seized Unjustly is a post from The Bellarmine Forum.
https://bellarmineforum.org/to-restore-what-has-been-seized-unjustly/
Do not repost the entire article without written permission. Reasonable excerpts may be reposted so long as it is linked to this page.