Uplifting anecdotes, and a story for your lent.

I pulled a couple notes out of a stock pile of old stories on virtues. I wonder why stories like this are so scarce today.

On Modesty.
Let no man boast of his good deeds. A man at work in a harbor saw a little boy fall into the water.He instantly sprang in after him and got him out. He then went on with his work, wet through as he was, until the dinner hour, when he went home to change his clothes and take his midday meal. Both in the street and in his own house he was beset with questions as to how he got his clothes so wet, but he invariably gave an evasive answer. Several days later, on returning from his work, he found awaiting him at his home the boy whom he had rescued from a watery grave, together with his parents. As soon as he crossed the threshold the boy cried out: “That is the man who pulled me out of the water!” Thereupon his parents thanked him with tears for saving their child’s life. On being asked why he had kept his good deed secret, he answered in Our Lord’s words: “Let not thy left hand know what thy right hand doeth.” That man is much to be commended for his reticence ; for one who prides himself on his virtuous actions or boasts of them, loses all merit in God’s sight.

Charity — ST. MARTIN DIVIDES HIS CLOAK
What is done to the poor is done to Christ. St. Martin was originally an officer in the Roman army.
One bitterly cold winter’s day he was riding out of the town of Amiens in France, when at the city gates he beheld a beggar almost destitute of clothing, shivering with cold. No one had had the charity to give him a worn-out garment. Martin, moved with compassion, drew his sword and cut his warm military cloak in half, giving one piece to the beggar. He then rode on. The next night he had a dream, or rather a vision. He saw Our Lord Jesus Christ, surrounded by angels, wearing the half-cloak which had been bestowed on the beggar, and saying to the angels: “Look, this is the garment which Martin gave to me.” This dream led to Martin’s conversion; he was baptized, and was more liberal in almsgiving than ever. Later on he was made a bishop, and led a saintly life. God regards what we do to our fellow-creatures as done to Himself. 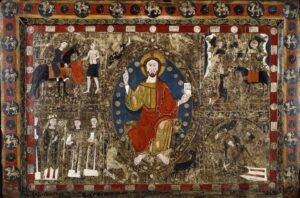 Amazing story of yesterday — how times have changed! and what we’ve lost.  PHILLIPS BROOKS. A true story from the late 1800s.
The devotion of Catholics to their clergy and to their religion generally is a source of never ending wonder to others. The sacrifices our people in the United States have made and are making to build up a Parochial School system is a good instance of this. It is an incontestable argument for the power of the true faith and its ability to inculcate holiness of life. Phillips Brooks, the late Episcopal Bishop of Massachusetts, when rector of a church in Philadelphia, often remarked to his curate at breakfast that it was wonderful to peep out of one’s window on a bleak winter s morning and see crowds of Catholics trooping to church at 4.30 A.M., on a holy-day of obligation. “Suppose,” he would say, “you and I were to announce to our people next Sunday that on the Wednesday following there would be special services at 4:30 A.M. How many, think you, would we find present?” And then Brooks countenance would cloud over, and growing thoughtful he would say over and over to himself:
“A wonderful institution, surely; a wonderful institution!” The curate, who had been making the observations to Brooks, eventually became a Catholic priest.

Nevertheless, tying it all together: take heart in your devotions this lent, they mean something beyond what you see, don’t boast about them, and be good to someone as it may just cause Jesus to show the angels what you did for Him!

This article, Uplifting anecdotes, and a story for your lent. is a post from The Bellarmine Forum.
https://bellarmineforum.org/uplifting-anecdotes-and-a-story-for-your-lent/
Do not repost the entire article without written permission. Reasonable excerpts may be reposted so long as it is linked to this page.