What Happened to Notre Dame? 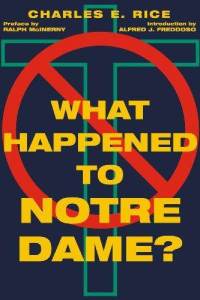 When the University of Notre Dame announced that President Barack Obama would speak at its 2009 Commencement and would receive an honorary doctor of laws degree, the reaction was more than anyone expected. Students, faculty, alumni and friends of Notre Dame denounced the honoring of Obama, who is the most relentlessly pro-abortion public official in the world. Beyond abortion, Obama has taken steps to withdraw from health-care professionals the right of conscientious objection, including thousands of Notre Dame alumni who will be forced to choose between continuing their profession and participating in activities they view as immoral. And they will be forced to that choice by the politician upon whom their alma mater confers its highest honors.

Notre Dame’s honoring of Obama is not merely a “Catholic” thing. Many thousands of citizens with no Catholic or Notre Dame connections have protested it. They see Notre Dame’s actions as a capitulation of faith to expedience and the pursuit of vain prestige. Obama’s record and stated purposes are hostile to the most basic truths of faith and the natural law affirmed by the Catholic Church and many others.

Charles E. Rice first recounts the details of Notre Dame’s honoring of President Obama. He then examines the succession of fall-back excuses offered by the Notre Dame President Rev. John I. Jenkins, C.S.C., and University publicists to justify Notre Dame’s defiance of the nation’s bishops and of Catholic teaching. Rice diagnoses the problem’s roots by providing an overview of the Land O’ Lakes Declaration where, in 1967, the major “Catholic” universities declared their “autonomy” from the Catholic Church. This false autonomy led to an erosion of the Catholic identity of Notre Dame and other Catholic universities. Next, Professor Rice offers a cure: Christ, who is God and the author of the divine law and the natural law.

From the Introduction:
“What [Notre Dame] is not–and has not been since I’ve been here–is a Catholic university, i.e., an institution of higher learning where the Catholic faith pervades and enriches, and is itself enriched by, the intellectual life on campus. What it is instead is a national private university that is more open to (or, at worst, more tolerant of) Catholic faith and practice than any other national private university that I know of. Or, as I like to put it in a less formal idiom, Notre Dame today is something like a public school in a Catholic neighborhood….I pray that this is not so. So does Charlie Rice. But one purpose of this book, unfortunately, is to show that the movement toward secularization at Notre Dame is much further along than most people would have believed before March 20, 2009.–Alfred J. Freddoso, Associate Professor of Philosophy, University of Notre Dame

This article, What Happened to Notre Dame? is a post from The Bellarmine Forum.
https://bellarmineforum.org/what-happened-to-notre-dame/
Do not repost the entire article without written permission. Reasonable excerpts may be reposted so long as it is linked to this page.