The Catholic Church and the Obama Nation 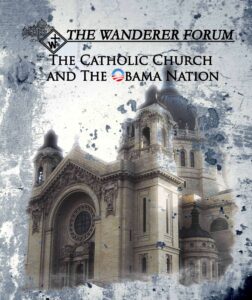 e in its history has the United States been so secular and godless. Never before has there been such hostility—overtly and covertly – toward not only the Catholic Church and her teachings, but also toward common sense.  This, unfortunately, is the program of the Obama Administration.  Indeed, it is not inappropriate to say that we face a cataclysmic moment for the human race. The false and murderous program of the power elites (that has its origins in the Enlightenment) has already laid the groundwork for a post human age – a cold, inhospitable world where people are not cherished and loved, but valued only for their usefulness, in which human persons are nothing other than talking machines.  Only through Christ and His Church can effective combat can be made to restore man to his holy destiny. We must do our part to fight and preserve that truth which has been given to us. Purchase this scintillating analysis now and engage!

This article, The Catholic Church and the Obama Nation is a post from The Bellarmine Forum.
https://bellarmineforum.org/the-catholic-church-and-the-obama-nation/
Do not repost the entire article without written permission. Reasonable excerpts may be reposted so long as it is linked to this page.