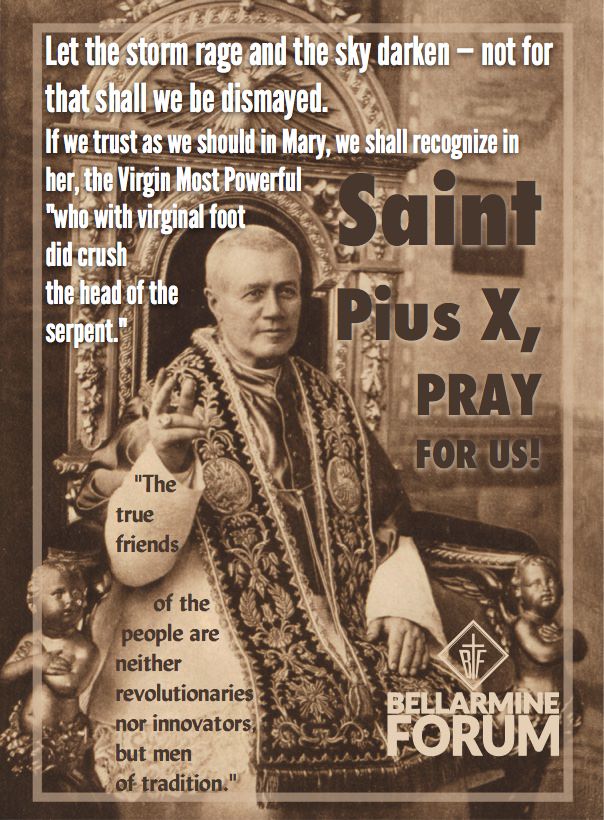 What’s not to love about St. Pius X? We love him for so many things, especially his clarity in preaching on the Blessed Mother, the emphasis on the Blessed Sacrament, especially as “the shortest and safest path to Heaven“, and his clarity against the modernists we still fight today. But he was so much more! We’ve collected some facts about his life that you might find surprising.

Among other things, a lot of the criticism levied against Pope Francis, such as making accommodation for the homeless, dining with the ordinary people, or wandering off to talk to the street people in Rome, were in fact activities started by Pius X! Read on and be surprised that this staunch defender of the faith, and true fatherly guide, was very much an ordinary guy who shunned many of the trappings of elitism appurtenant to the office of Pope.

1. His parents were Polish.
Pope Pius X was born in Italy to parents that had immigrated to Italy after the Prussian occupation. They were granted political asylum. Jan Krawiec, from Wielkopolska, was a tailor, and in order to blend in to Italy, changed his name to Giovanni Battista Sarto. Sarto means tailor in Italy, so Giuseppe chose the name because it represented what he was. Years later, he and his wife gave birth to Giuseppe, who we now know as Pope Pius X.

His father died when he was very young however, and his mother had to raise him and his sisters and brothers with her sewing and farming. They were poor.

3. He changed Papal Dining to be with his friends.
Great scandal was incurred among the elite when Pope Pius X ceased dining alone, and started inviting his friends and people he met to eat with him. Lately, we’ve seen the news report on Pope Francis doing the same, even going to the cafeteria to eat with the workers and public. We have no one to blame but our beloved Pius X, who broke the mold on papal dining habits. He was, in many ways, beloved for being an ordinary guy that rose to the Papal throne.

4. He Created an internal spy network to detect modernists within the Church.
Proving that his assertions that modernists were pernicious charlatans that put their energies into avoiding detection, he created the “Department of Extraordinary Affairs” in the Secretary of State’s office and appointed Umberto Begnini as the director. From there, an entire network was created throughout the Church to report on modernist activities.

5. He caused miracles during his life.
During a papal audience, Pius went to hold a paralyzed boy. While hugging the boy, he suddenly broke free from the hug and began to run around the room in joy that he had been healed. Another time, there was a couple he knew from his time as bishop with a child that had meningitis. They wrote a letter to him asking for his help. He wrote back telling them to hope, fast, and pray.  Two days later, the child was cured.

6. He Carried Candy in his pocket for the Street People
Pope Francis isn’t the first to get busted roaming the streets of Rome talking with street people. St. Pius X began this trend. He was known for keeping candy in his pocket for them. He’d go out and teach them catechism and made many friends among the poor and homeless in Rome and elsewhere, as he had done this while a bishop and earlier.

7. Daily sermons for the ordinary people, weekly catechism for children.
He did the unthinkable in those days and opened up the San Damaso courtyard in the Vatican for a weekly catechism class, where he made a special reserved space for children. There, he’d regularly talk to the children on subjects the children would ask about. Later, he would issue a Confraternity of Christian Doctrine that was motivated to reclaim children from ignorance of Our Lord.

You’ve got to love the ordinary guy behind such a great pope.

Today, his feast day, perhaps animated by this touch of his human side, recite again (or for the first time), his oath against modernism:

THE OATH AGAINST MODERNISM

To be sworn to by all clergy, pastors, confessors, preachers, religious superiors, and professors in philosophical-theological seminaries.

[formatted with bullet lists and spacing for easier reading]

I ____________[your name], firmly embrace and accept each and every definition that has been set forth and declared by the unerring teaching authority of the Church, especially those principal truths which are directly opposed to the errors of this day.

By this assent, because of the authority of the supremely truthful God, we believe to be true that which has been revealed and attested to by a personal God, our creator and lord.

Furthermore, with due reverence,

Finally, I declare that I am completely opposed to the error of the modernists who hold that there is nothing divine in sacred tradition; or what is far worse, say that there is, but in a pantheistic sense, with the result that there would remain nothing but this plain simple fact-one to be put on a par with the ordinary facts of history-the fact, namely, that a group of men by their own labor, skill, and talent have continued through subsequent ages a school begun by Christ and his apostles.

I firmly hold, then, and shall hold to my dying breath the belief of the Fathers in the charism of truth, which certainly is, was, and always will be in the succession of the episcopacy from the apostles. The purpose of this is, then, not that dogma may be tailored according to what seems better and more suited to the culture of each age; rather, that the absolute and immutable truth preached by the apostles from the beginning may never be believed to be different, may never be understood in any other way.

I promise that I shall keep all these articles faithfully, entirely, and sincerely, and guard them inviolate, in no way deviating from them in teaching or in any way in word or in writing. Thus I promise, this I swear, so help me God.

This article, 7 Surprising Things about St. Pius X is a post from The Bellarmine Forum.
https://bellarmineforum.org/5-surprising-things-about-st-pius-x/
Do not repost the entire article without written permission. Reasonable excerpts may be reposted so long as it is linked to this page.