“Ask her out” was what they said before the ToB Movement

I can remember the shock as I heard the answer to a question I put to Fr. John N. Felton, SJ. Fr. Felton, may God grant his soul to rest with a just repose, was a classics professor at Xavier University who used to say noon Mass at my old parish… In Latin, when he could, he made it easy enough to converse with him in Latin, but this discussion was in English.

His tone and cadence could not be mistaken for anything pedestrian. He had a unique way of emphasizing phrases that revealed his mind was ordered in Latin and Greek grammar constructions. Despite the friendliness, I always had a bit of reverence talking with him because he had a way of unraveling an argument with a single phrase. It was always a bit precarious therefore to seek his advice because he’d cause, with a phrase, whatever certainty I had in a conclusion to be gone as he’d point out something I overlooked. He was always rather easy going and had quite a casual demeanor, so his analytical edge was hidden under a soft and cushy surface.

One day, however, quite confused as I was at the time (this was twenty years ago) mostly because of an encounter with a Catholic gal who, it seemed at least, thought Josephite marriage should be the norm, I had a dilemma to solve regarding a new opportunity. I was at the Jesuit residence, talking to Fr. Felton about grad school and I took the moment: “Father, with all this talk about chastity today, and with the way things are, what should a guy do when he finds a woman totally arousing?”

I was shocked by the obviousness. After a few moments, I had to get his reactions to further questions. I wanted to compare this to advice seemed to be given by one of his peers.

Long before the Theology of the Body “movement” there was another Jesuit priest in Cincinnati who had these questions and ones far more real than those touted as new (by followers of Christopher West) discussed in books and classes he’d conduct. Fr. Herbert Ratterman, SJ, may God grant his soul to rest, had penned a book long before I was born titled Charity, Sex, and the Young Man.

Fr. Ratterman had given me a copy of his book one time as if it was contraband. I remember him saying, “this book gets people today upset.” He stood by the advice in it, and I’m glad he did. He said that he didn’t think the topics in it were for mixed company. In this way, Fr. Ratterman showed a concern for modesty lacking in the ToB talks today. The book covered all the sorts of questions a young man’s mind will have, so you can see why he’d be cautious.

My understanding of the advice in that book, advice circulating in Catholic talks on the subject, and general curiousness lead me to push Fr. Felton. After all, Fr. Felton gave me no warnings on concupiscence, impurity, or any of the other things deemed “necessary” disclaimers to the zeitgeist of the time… His advice was straightforward: “ask her out.”

So I began to question Father Felton. I eventually give statements from Fr. Ratterman’s book. Fr. Felton then recognized what I was up to. He picked up his phone from his desk and pressed a button.

“Herbert, this is John. I have one of our pupils here and we have a question for you.”

He put the phone on speaker and asked, “if a young man following all the advice in your book on sex meets a lady that arouses him, what should he do?”
The voice on the phone stammered a little revealing that it really was Fr. Ratterman, asking “Is she married?”

Fr. Felton’s face shifted a little as if to acknowledge that was a fair oversight on his part. “No, Herbert.”

“Well, I suppose he should ask her out on a date. Bring her flowers.”

I was equally shocked again. They ended their call. Father Felton then began to point out to me that it was the Gnostics who thought the body was evil and its desires were all evil, but God made us this way, and without the delights, nobody would ever seek marriage.

God bless those priests – without that exchange, I might believe what the Theology of the Body movement purports when they claim that the Church misunderstood sexuality prior to their arrival. Hogwash. But yet, people believe they are receiving new secret knowledge in that movement that liberates them. More hogwash! 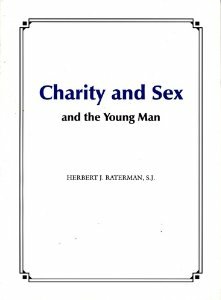 To obtain a copy of Fr. Ratterman’s book, Charity, Sex, and the Young Man, order it from Roman Catholic Books at this link. The small and succinct book is still superior to the tomes I’ve seen handed around today.

Meanwhile, I have yet to start on Dr. Von Hildebrand’s book… Maybe tomorrow.

This article, “Ask her out” was what they said before the ToB Movement is a post from The Bellarmine Forum.
https://bellarmineforum.org/ask-her-out-was-what-they-said-before-the-tob-movement/
Do not repost the entire article without written permission. Reasonable excerpts may be reposted so long as it is linked to this page.