Finally, today, I had a box in my mailbox — I was hoping, and it turned out to be the box for which I have been waiting. The Fall catalog of Roman Catholic Books advertised this saucy title from Dr. Alice von Hildebrand: 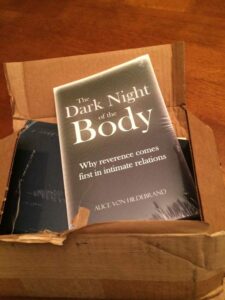 It is precisely what it says:  a critique of the Theology of the Body movement afoot these days. I underline movement because there is at least three or four different things roaming our lands identifying themselves with that name.

To get things straight, I recall seeing one of these talks years ago and laughing in my sleeve at it. It struck me as a cross between Anthony Robbins, an infomercial, and some sprinkles of Catholic words on top so that everyone got the idea that it was supposed to be Catholic. Nowhere in it did I encounter advice or practical tips that matched the advice I had received from older, wiser, and far better read priests in the years prior to the arrival of this circus show movement.

POINT ONE:  the practice of chastity begins with telling the truth. That’s easy to comprehend. I really meant it when I posted this article last year — the problem of chastity, even in instructing young people today, is one caused by the crisis of truth in people’s minds and speech. It’s an easy concept — to delve into the life of promiscuity requires internal lying, and a choice by the unchaste to accept and develop the lies. If lies are at the root, then telling the truth begins the remedy. Like all the virtues, it’s such an easy idea to comprehend, but that’s not so easy to practice.

POINT TWO:  there is no defect corrected by or grand discovery in Pope John Paul II’s lectures. His lectures were mostly expository of things known and well discussed in Catholic tradition, with some synthesis in modern terms — it was not new and unchartered territory (as is alleged by many in the movement). The very point of honesty and telling the truth, both with the tongue and with the body was a major assertion by John Paul II. In several places across many of the lectures, John Paul II makes the point that fornication is but one work of the flesh, that Purity begins in the heart, yet, says John Paul II:

“Impure works in the same sense are defined not only as adultery and fornication, and so the sins of the flesh in the strict sense, but also “‘evil thoughts…theft, false witness, slander.'”

False Witness and slander are lies. John Paul II makes this connection in many places — why? Because Catholic tradition has always made this observation of basic human nature!

I challenge you to find such in the “MOVEMENT” afoot today, however.

It follows that liars cannot be intimate with someone, because there will always be a false basis to the things shared between them. Thus, if a person habitually lies, they cannot, without reformation to truth telling, have a relationship with another person as God intended and made us to.

Even Dante’s Inferno makes this point by the stratifications of hell. The people with sexual aberrations are not at the lowest levels — no, the lowest levels of hell were for liars, cheats, frauds, and treachery. The fornicators and other pervasions are still in hell, but it should be obvious to anyone reading here why they aren’t down in the depths of depths with fraud and treachery.

I summarize a larger topic only to make the point that here is something so essential and fundamental to the topic at hand that is never discussed — telling the truth is key to human relationships, even those with sex (marriage). Only on this basis can there be true intimacy — and it follows then that the body will follow. Just as every other practice of virtue starts — errors (lies) are expunged from the mind that the mind can properly inform the will.

THE PROBLEM:  Academic discussion revolves around critical analysis. Ideas are worked out by debate and debate acts as the honing stone that chips away the error from the blade’s edge making it sharp. Have you tried to critically analyze Theology of the Body movements, though? You will be met with aghast looks disdain, shock, horror, and all sorts of other emotional response. Criticism is not welcome among the people who think it is a good thing. Over the years, I’ve come to suspect that such reactions are because most people don’t have actual knowledge of the subject and want to cheerlead. It’s not a satisfying discussion because the ideas are vague and misapplied. What’s worse, omissions are severe and terminally erroneous (such as overlooking the connection to telling the truth).

Despite wanting ideas and topics that can withstand the strongest critical analysis, most of the cheerleaders resort to emotional fallacies to protect the concept. So there isn’t a good hearty discussion, just acceptance and books sales and a lot of hopeful self-made experts.

Somebody like Dr. Alice von Hildebrand can, however, get people’s attention. I expect I will scratch my head a few times and have to re-read a section here and there, but it will be worth it. This topic consumes so many around us, and a real, heartfelt, and critical discussion needs to happen — despite what is claimed by ToB cheerleaders, JPII didn’t suddenly overthrow 2000 years of Catholic understanding of human nature. So what’s going on?

It’s a short book — the Table of Contents is interesting to me: 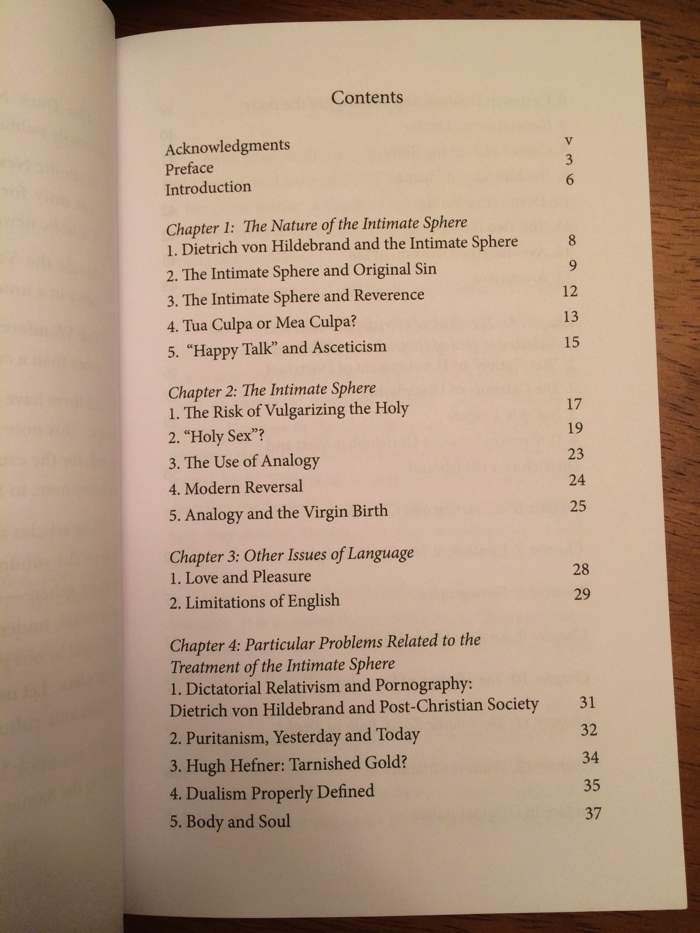 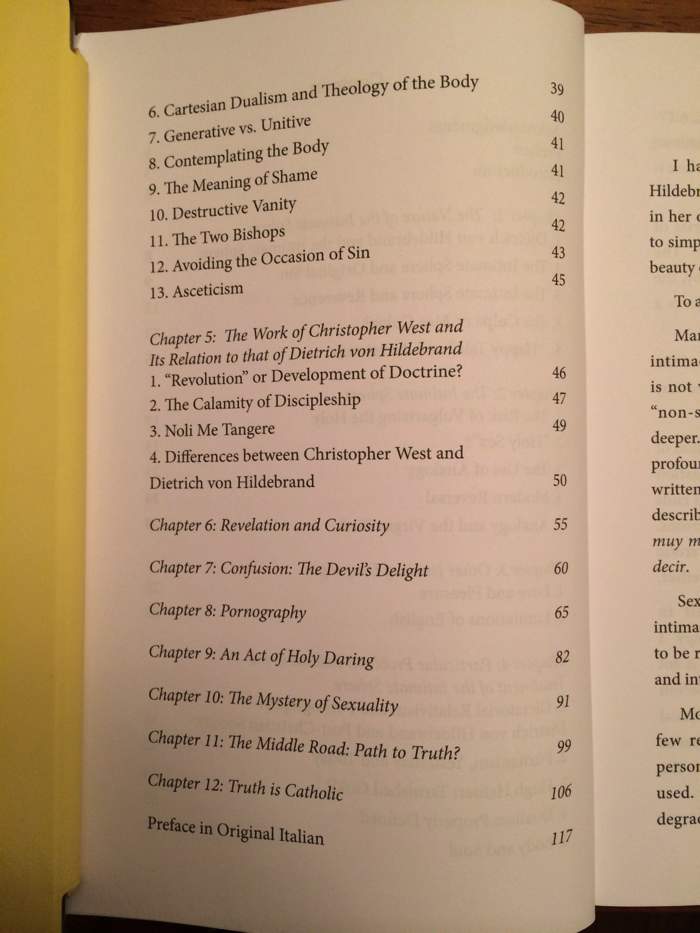 I haven’t read it (yet) — but notice even the point where Dr. von Hildebrand arrives:  Chapters 11 and 12 are about truth.

Have you read this book yet? What about Theology of the Body? Have you read John Paul II’s talks themselves or just heard somebody mention it?

This article, Dark Night Arrives is a post from The Bellarmine Forum.
https://bellarmineforum.org/dark-night-arrives/
Do not repost the entire article without written permission. Reasonable excerpts may be reposted so long as it is linked to this page.