Book review: My Battle Against Hitler 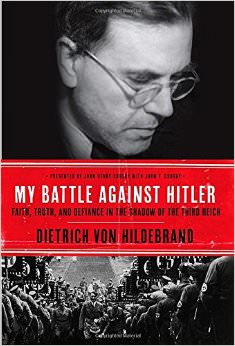 My Battle Against Hitler, a posthumously published memoir and collection of essays by “20th century Doctor of the Church” Dietrich von Hildebrand, is a timely cautionary for a world that is again on the cusp of momentous world events.

It is sobering to read, for example, a Provincial of the German Dominicans remark, in the spring after Hitler became chancellor, “We Catholics have to put ourselves in the front ranks of National Socialism and in this way give everything a Catholic turn.” (p. 71) Von Hildebrand was beside himself. Days earlier, he had learned that his brother-in-law, the composer Walter Braunfels, had been dismissed from the music conservatory in Cologne at which he was founding director for being “half Jewish.” (pp 64-65) There was no way to “baptize” Nazism just as there is no way to “baptize” any ideology that depersonalizes people.

“I saw with horror the path that some leading Catholics were taking,” he writes, “and I saw how terribly the soon-to-be concluded Concordat with Hitler was bound to affect the spirit of Catholics, how their inner resistance would be paralyzed by it. Hitler has given an address in the Reichstag in which he uttered many expressions about peace and his love for peace. The duplicity and dishonesty of these phrases were as clear as day to me. But, unfortunately, not for many other Catholics in Germany.” (p. 75)

Deciding that he must leave Germany while the Nazis held power, von Hildebrand identified himself as “non-Aryan” – in solidarity with his Jewish grandmother – and was promptly fired from his professorship at the University of Munich. (p. 74) The first, almost eight month-long, leg of this exile was spent in Florence, where he learned that a German priest, during a Catholic Academic Association conference, had “praised the Third Reich as the realization of the Body of Christ in the secular world.” How often Catholics today hear their priests confuse the Kingdom of Heaven with a temporal kingdom they would like to construct or confuse the Body of Christ with a body politic in order to justify radical political positions.

The Compromise with Evil

Von Hildebrand immediately resigned from the Association’s board and as chair of its foreign commission, believing the conference to be a “shameful betrayal” and a “miserable compromise” with evil. (p. 77) He was met with incomprehension. The Concordat signed between the Vatican and the Third Reich that year (1933) had confused his fellow Catholics and left them with a false hope that the Church could coexist with this new, criminal government, perhaps even injecting some mitigating good.

What von Hildebrand writes about the Concordat could be applied to so many well-intentioned compromises that Church leaders have made with political wolves. “I personally regretted the Concordat for its psychological effect on the Catholics in Germany, and so did many others. The Concordat itself did not contain any yielding to Nazism – and Germany was at that time still a militarily weak country. It was not yet the dangerous aggressive power that it had become in 1938; Hitler was not yet at the head of a strong and powerful state.” (p. 81)

To his Catholic friends who still lived in Germany, he wrote “of the terrible danger of allowing oneself to be pressed into compromises and above all of inwardly adopting a neutral or even a friendly stance toward National Socialism. I explained that they were being confronted by the Antichrist and that, if they were forced to live with him – indeed, even to be exposed to his force – it was absolutely necessary to bear the concealed ‘dagger,’ as it were, of absolute and irreconcilable enmity, ready to make use of it at the first opportunity….” (p. 83)

After living in Florence for the better part of a year without any real income, von Hildebrand moved his exile to Vienna in order to provide “philosophical support for the resistance of Engelbert Dollfuss,” Austria’s anti-Nazi chancellor. (p. 93) This resistance was accomplished by founding a “Catholic, anti-racist, and anti-totalitarian journal” called Der christliche Stӓndestaat (The Christian Corporative State). The title was not von Hildebrand’s idea but was intended to reflect Dollfuss’ goals to introduce corporatism, a Catholic economic concept also called “distributism” that builds on the shared interests of owners and workers rather than pitting them against one another. It proved a successful publication and an articulate, intelligent voice against National Socialism.

Sadly, the Austrian political landscape was crumbling rapidly. Dollfuss was assassinated by the Nazis in 1934, only a year after the founding of Der christliche Stӓndestaat. Von Hildebrand continued publication of his journal and, to that work, hosted regular “gatherings” of influential and like-minded people to discuss philosophy and politics. By the beginning of 1935, he had been appointed associate professor of philosophy at the University of Vienna and was lecturing extensively in various venues.

However, his passionate and outspoken anti-Nazi convictions meant that these accomplishments were controversial and dangerous. A huge Nazi student demonstration greeted his inaugural lecture and the Viennese chief of secret police informed him that he was on a Nazi hit list. The journal began to struggle financially.

Perhaps even more tragic was the hostility of those who, ironically, opposed von Hildebrand’s political stance as too “Germanic” and rigid. To one who had fatuously argued that opposition to National Socialism was “wrong and futile” because “the voice of the times is the voice of God,” von Hildebrand retorted that “God calls us to fight the Antichrist regardless of whether we triumph….it is precisely our struggle against evil that God wills.” (p. 206)

From Battle to Flight

As Austria made increasing concessions to Germany, von Hildebrand’s position became untenable. He was stripped of German citizenship for “high treason.” (cf p. 218) A private letter of Franz von Papen, German ambassador at the time to Austria, written to Hitler, accuses “the all-too-well-known expatriate emigrant Professor Dietrich von Hildebrand, editor of the weekly journal, Der christliche Stӓndestaat” of seeking to “overthrow the Nazi regime and…trying to untie the enemies of Nazi Germany under a single leadership.” He urges “a severe blow against these extremely evil and dangerous enemies of the Reich working in Austria.” (April 30, 1937; p. 232)

This meant that, after the invasion of Austria by Germany in the spring of 1938, von Hildebrand and his wife were forced to flee Vienna to Czechoslovakia, along with hundreds of others. Five hours after their departure, the Gestapo arrived at their Viennese apartment to arrest him.

From Czechoslovakia to Hungary, from Hungary to Switzerland, from Switzerland to France to Spain, to Portugal, and finally to New York, von Hildebrand taught when he could and largely lived in a state of great dependency on “the sweetness of Christian charity.” (p. 244)

The second half of My Battle Against Hitler is a collection of articles that were written during the “Austrian years” of von Hildebrand’s exile. The distinction between “patriotism” and “nationalism,” the loss of true “German culture” under Hitler, the utter incompatibility of Catholicism and National Socialism, as well as more philosophical topics such as the relationship of the individual and community and the hierarchy of values are among the issues his great mind tackled.

Von Hildebrand’s “nose” for error and his keen ability to see where error leads – politically and morally – are as fresh and relevant today as they were eighty years ago. Against the rising tide of anti-Semitism, then and now, he writes: “Every man, whatever his race, is created by God after His image. Every man has an immortal soul destined for eternal communion with God. Race, according to Catholic doctrine, is a quite secondary and accidental biological factor, having no effect on the possibility of man’s attaining his eternal end, since the values he is called upon to exemplify are by no means determined by race…[I]n the long run anti-Semitism always ends up in anti-Christianism, as the development of the Nazi doctrine so abundantly proves. This connection between anti-Semitism and anti-Christianism is not accidental but is determined by an inner logic…” (pp. 265; 267)

Philosophical ideas have consequences and will breed terrible inhumanity or great moral courage, depending on which are held.

The remarkable accomplishment of Dietrich von Hildebrand’s life, illustrated so admirably in My Battle Against Hitler, was heroic consistency between his beliefs and the personal sacrifices he made to defend those beliefs. “For us Catholics,” he writes in an essay titled “The Parting of the Ways,” “this time involves, above all, an exposure of our true convictions.” (p. 300) His was truly a “lived” faith.

Title Information:  My Battle Against Hitler: Faith, Truth, and Defiance in the Shadow of the Third Reich. By Dietrich von Hildebrand. Translated and edited by John Henry Crosby with John F. Crosby. Image Books (2014)

This article, Book review: My Battle Against Hitler is a post from The Bellarmine Forum.
https://bellarmineforum.org/book-review-my-battle-against-hitler/
Do not repost the entire article without written permission. Reasonable excerpts may be reposted so long as it is linked to this page.