Chuck Norris (Fr. George Rutler) on Communion in the Hand

If you’ve ever been a fan of kung fu movies or action films, you can always tell who the prize fighters are. Maybe Bruce Lee or Chuck Norris. But then they reveal the bad guy. The best of these films always have you wondering how the good guy is going to win. You know he’s going to. You can’t wait to see how this bad guy gets taken down. Sooner or later, the hero shows up, and then the real movie begins. 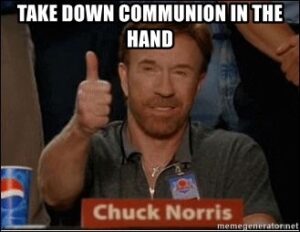 The scene of the latest is Communion in the hand. Cardinal Sarah’s comment on the diabolic attack on the faithful around the practice of taking Holy Communion in the hand has made waves. In that wake, I’ve enjoyed reading the opinions of many. But, just like the movie, I kept waiting to see Chuck Norris show up for the fight. By “Chuck Norris”, I mean Fr. Rutler.

Fr. Rutler can write in a way that resembles those movies. He’s like the Chuck Norris of Catholic commentary today. And he’s good. punch, punch, jab. Take down! If you’ve followed his writings, you know what I mean. He has a way of weaving and jabbing that can make you cheer before he swipes and you see the opponent taken down. Some say that Chuck Norris has a third fist in his beard. If that’s true, then Fr. Rutler has one in his pen.

So, I was waiting to see Chuck Norris show up on the scene of Communion in the Hand. He did on First Things in an article titled Humility and the Host.  As usual, there are some great jabs at the minor bosses of the scene. He swipes at “Reconciliation rooms”, he gives pro populo a kick, and he does a scene busting round kick with Aquinas on whether the faithful should touch the Sacred Species of Holy Communion. Nice. Thorough.

I was a bit unsettled with part II of the movie, though. It doesn’t read the way I expected. The section starts and ends this way:

It would be imprudent to return to receiving communion on the tongue as a universal practice by sudden decree, but the option should be encouraged, as should kneeling to receive. […]

[…] But there will be no substantial improvement until another generation is willing to admit that the “spirit of Vatican II” often did more damage than good, and that many of the subsequent liturgical changes were disastrous.

Now, there were good moves in that Act. But the conclusion seems to admit an enemy that Chuck Norris says we need to endure. whoa. He’s saying that we should go back to Communion on the tongue while kneeling. But as a Church, he says we cannot go back today. It takes some crafty parsing to read Rutler here. He almost morphed into Bruce Lee, but I think I can explain why he thinks we will not be able to change things today.

In my opinion, Rutler is telling us the boss guarding Communion in the Hand are prelates in the Church that believe the Spirit of Vatican II reforms are good. Look in the middle of the section above in the original article and you will find that the first paragraph explains that they’ve ordered the flock, with pro populo and linguistic programming, to expect it. He mentions that people now talk of “taking communion” instead of “receiving Communion”.

The second paragraph, though, reveals the boss: a prelate. And that prelate tells Rutler that Communion in the hand has been a good thing. Rutler goes through objective evidence that it isn’t, including that it invites profanation. Recall from the post of a couple days ago wherein I explained that P. Paul VI conditioned the practice so long as it did not invite profanation. Rutler is thereby demonstrating that objective evidence shows that the prelate could not actually believe it is a good thing. Why is he saying it then?

Rutler gives the punch:  because of the “Spirit of Vatican II”. Namely, prelates in our Church are required to change the practice, but they will not do so until we have prelates that no longer think the Spirit of Vatican II is good…  that is to say, until we have prelates that no longer ignore reality in favor of the phantasm of Vatican II…  Rutler points out the same statistic I did about the dramatic loss of Mass attendance and belief in the Real Presence. Is it any wonder that our bishops, stuck in fantasyland, are captivated with dreamers? Staying in dreamland is a way to ignore reality.

Fortunately, the Bellarmine Forum has targeted this boss with our latest book Slaying the Spirit of Vatican II with the Light of Truth.  Order your copy on this page by clicking here.

The best way to defeat error like this is to reveal it and make it known to many. Fr. Rutler did a great job! But even his three fists aren’t enough for this enemy…  he needs all of ours, too!  Get the book and get on board!

Our Lady of Fatima, pray for us!

This article, Chuck Norris (Fr. George Rutler) on Communion in the Hand is a post from The Bellarmine Forum.
https://bellarmineforum.org/chuck-norris-on-communion-in-the-hand/
Do not repost the entire article without written permission. Reasonable excerpts may be reposted so long as it is linked to this page.

Tagged as: Communion in the hand, Fr. George Rutler, spirit of Vatican II

The Most Powerful Woman