Communion in the Hand is “Perfectly” Legal?

When famous ponzi scheme fraudster Bernie Madoff was apprehended, he defended himself by positing that “I was only doing what everyone else was.”

I can recall trying that defense as a child:  everyone else is doing it…  The implication is plain:  …so it must be OK. That never really worked with my parents (nor should it have). Invariably, you get asked “so if everyone else is walking off a bridge, you’re going to also?”  My childhood mind was never able to retort that…

Similarly, to say that something is legal implies that it’s OK, right? For instance, the vote in congress to pass the Obamacare bill. Obamacare is now legal [so shut up about it, right?]. Nevermind how it was made “legal.”  That it was signed by the president after votes passed in congress means we should just accept it. Start paying for the contraceptives now… it’s legal.

You know that’s not correct. (at least I hope you do)

So I had to laugh at this tweet by Dr. Ed Peters:

A number of people reacting to this tweet have pointed out the ALL CAPS YELLING.

I was amused by something else:  Not only is it legal, but PERFECTLY so. 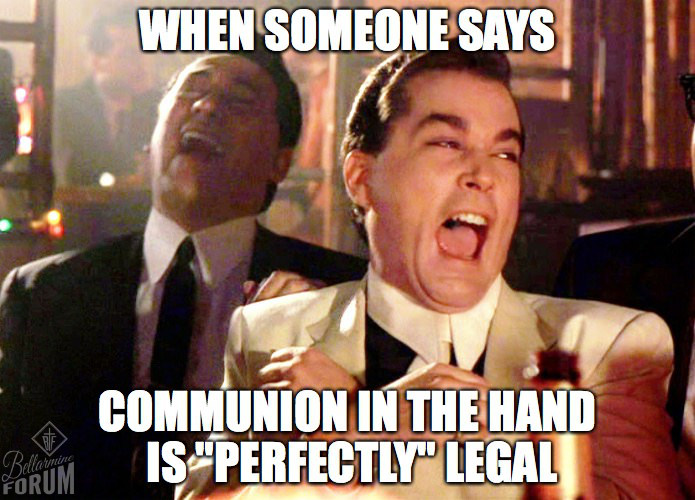 I will bypass any comment on the martyrdom insinuated in the beginning of that tweet. Rather, let’s look at what the legalities of the practice of Communion in the hand really are. Is it really “perfectly” legal? I mean, that’s something greater than just being legal…  it is perfect!

I take that as a challenge to my law skills. Nothing in law is perfect. Not in this world, at least. The Law Himself (that’s Jesus) is perfect. And, as a side note, since we are talking about Holy Communion, that is His real presence, then I suppose I am wrong to say nothing of the law is perfect in this world.

Indults Are Meant to Be Temporary

If you’ve listened to Fr. Hardon explain the history of Communion in the hand on this post, then you know already that there are several “legal” considerations far from perfect.

The first problem with calling the practice “perfectly legal” is that it ignores the difference between an indult and the norm. The Modern Catholic Dictionary defines an indult as “A temporary favor granted by the Holy See to bishops to permit them to do something not otherwise allowed.”

Communion in the Hand is therefore temporarily permitted because it is not otherwise allowed.

There’s already enough to say that the word “perfectly” was incorrect. That’s the nature of tweets, though — they aren’t precise, even for lawyers.

Cardinal Bernadin Forces the US Bishops to Request the Indult

The next problem is the vote itself. The late Cardinal Bernadin was Archbishop of Cincinnati in 1974, when he was made President Of the United States Conference of Catholic Bishops and National Conference of Catholic Bishops (1974–1977). He had three years to accomplish the task of ramming a number of frauds through the conference, one of which was Communion in the Hand. He knew the odds were against him. The Pope had already surveyed bishops individually on the practice and only 1/3 of bishops thought it was worth trying. 2/3rds of the bishops flat out said no.

Bernadin tried the issue twice and failed miserably. Votes in the NCCB roundly denied asking the Pope for an indult to permit Communion in the hand in the United States. Bernadin had only one more meeting to try this. What did he do? Among other things, he proved himself worthy of Chicago politics.

Inspired by the same playbook read by Rod Blagojevich, Bernadin extorted yesses, and gathered a number of invalid votes in favor. I don’t know if any dead bishops voted in that NCCB issue, but they did go to hospitals and call in retired bishops. In other words, Bernadin crammed the vote, Blago-style.

On this crooked vote, the NCCB petitioned for the indult to the Holy See. The indult was granted, but it was granted under duress. Bernadin and others had been forcing parishes to already practice Communion in the Hand. It was not legal when it was started in the U.S. because that was before the indult.

The indult was granted on the basis that it was a practice widely in use in America. In other words, they forced the Pope to acquiesce.

But, we should all roll over because it is “perfectly legal?”  huh? It doesn’t seem to be so. Bernadin was never indicted for his vote rigging scheme. Poor Blago, though, he was. He didn’t have Bernadin’s seamless teflon garment.

How can it be “Antinomian” to desire an end to an indult and favor the norm?

At the end of Dr. Peter’s tweet, he implies that to oppose the practice is to be antinomian. Antinomians hold the view that Christians are released by grace from the obligation of observing the moral law. A cheap way to describe it could be “I can do whatever I want because I’m saved.”  I’m sure the bridge is meant to imply rather that people feel like they can pick and choose the moral law. So he is saying that people that oppose Communion in the hand are picking and choosing the laws they follow. That’s not the case, though.

The norm of receiving Holy Communion is in the kneeling position and on the tongue. There’s the moral law.

Holy Communion is the real presence of Our Lord. It is literally and actually Him. That I prefer to worship Him and make my body reflect that belief is not antinomian. Moreover, it is difficult to stretch moral law into the realm of indults. Indults are what is otherwise not permitted. It is a toleration of excess.

In the case of Communion in the hand, it is toleration of abuse.

The Conditions of the Indult have been Broken

Pope Paul VI stressed a few things when admitting the indult, the conditions of which were listed in Memoriale Domini see the text on EWTN website here (Paul VI 1969). Two conditions stand out:  1) that the bishops must catechize the faithful on the practice; and, 2) it must not be done in a way that diminishes the belief in the real presence, or invites profanation.

The crisis of the belief in the real presence has been chronicled for the past thirty years. I’ve discussed it over and over. I thought I would see among liberal sources whether they discuss it, and I did find a survey by National Catholic Reporter from 2011 wherein they claim one third of Catholics have no idea that the Blessed Sacrament is anything more than a symbol.

The problem with their survey is that it was among people that actually go to Church. One-third of those people have no idea.

Let me restate the problem. Nobody asked the 60% of the Catholics that have left the Church since 1974.  (see, e.g. Hartford Courant, Long Decline In Attendance Led To Catholic Church Mergers, (May 21, 2017) report that the diocese of Hartford claims a 69% loss of Catholics since 1969). My own experience among people my age, born in the 70s, in similar:  about a third of us from Catholic schools still go to Church.

We can therefore impute that the greater portion of those 70% of lost Catholics do not believe in the real presence, right? Those people were not included in the Reporter survey.

So the indult itself had barbed conditions that have been proven – around 80% of the Catholics that existed when the indult was given no longer believe in the real presence. I’d argue it’s actually higher than that.

It’s not antinomial to hate the practice, it’s what Paul VI hated when being forced to permit it. Just as with Humanae Vitae, he predicted what we’d see.

Perfectly Insane, as predicted at Akita

I get what Dr. Peters was saying:  it’s not a hill he wants to die on. What bothers me, though, is that he glosses over the actual legal status of the indult, and seems to imply that opposing the practice could not have substantial merit.

When Our Lady appeared to Sister Sasagawa at Akita in Japan in 1973, it began with Sister having immense pain in her hand. The same hand on which she had been receiving Holy communion. She could not receive in the hand that day, and instead received on the tongue. She would later explain that the Blessed Mother showed her that the practice was causing suffering.

Again, at Fatima, there was also a stress on proper worship of Our Lord in the Blessed Sacrament.

Both apparitions asked us to make reparations for the sins and indifference towards the Blessed Sacrament.

We’d never really think that would come from the actions of our bishops themselves, but Akita did leave us with the warning that bishops would fight bishops, cardinal against cardinal.

There really should be no defense of communion in the hand. Whatever else it is, it is not “perfect” or even perfectly legal. I believe I laid out an argument to show that it should not be indulted any more on the terms of the indult itself.

It needs to stop. We need to stop Communion in the Hand. It is indefensible, especially on legalities.

So what do you think?

Is Communion in the Hand “perfect”? Should we defend it? Is belief in the Real Presence harmed by it?

Is Heaven placated adequately by the vote that the NCCB made to permit the indult? after all, it’s legal, right? 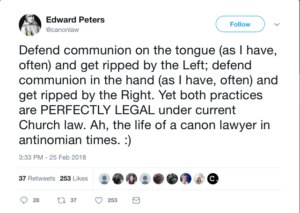 This article, Communion in the Hand is “Perfectly” Legal? is a post from The Bellarmine Forum.
https://bellarmineforum.org/communion-hand-perfectly-legal/
Do not repost the entire article without written permission. Reasonable excerpts may be reposted so long as it is linked to this page.

Tagged as: akita, Communion in the hand, Real Presence