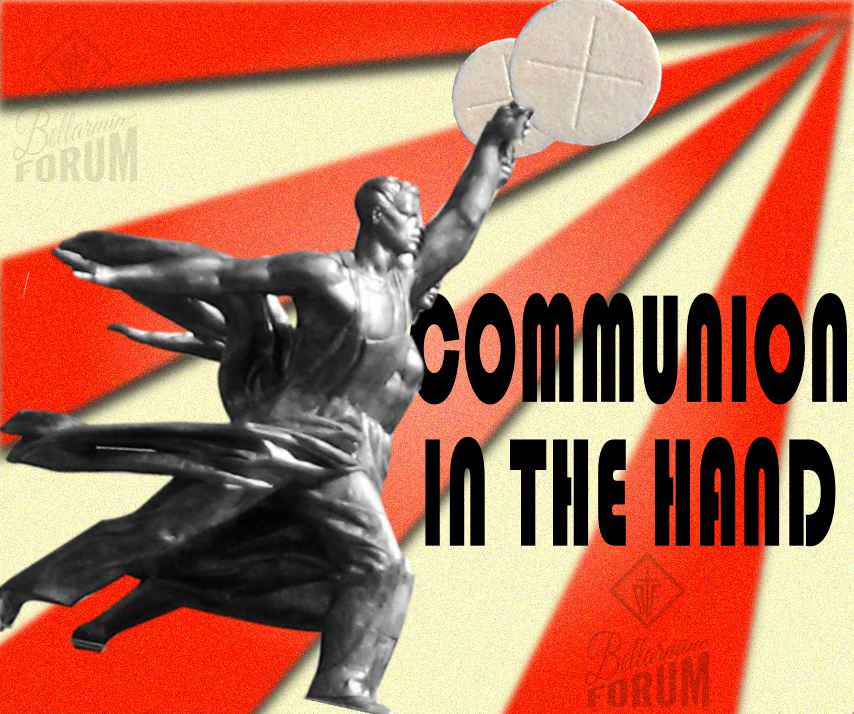 I often forget that the things that were common knowledge in the 90s are forgotten or ignored today. It becomes apparent when discussing communion in the hand, as I did the other day in the neopaganism article, or as I have in other contexts over the past few years, that people generally believe now that the Pope approved the practice of Communion in the hand.

Let’s get one thing straight:

“NO POPE HAS EVER REALLY VOLUNTARILY APPROVED COMMUNION IN THE HAND”

Father Hardon said that in his discussion at the 1997 Call to Holiness Conference, and he adds, “am I clear?”  For me it has been clear, but today, it appears that conversation is driven by a desire to make a “nice” history that sounds good on blogs and makes everyone comfortable. Instead of purging error, this approach is more like palliative care for true Catholic practice. Well, I don’t think we should accept the morphine dreams and drool on ourselves in the back pew, out of sight of the professionals.

The history is very clear, and Father Hardon was not engaging in “Jesuitry” in making the statement he made. Here’s the audio of his statement so you can hear it with your own ears:

That clip begins with Father Hardon clearly saying the above quote, but then Father goes on to say how this started. In 1965, the Dutch bishops just started telling their priests to distribute Holy Communion in the hand. (perhaps you see why the Bellarmine Forum was founded in 1965 – when the close of Vatican II brought such a maelstrom?)

The next year, in 1966, the so-called Dutch catechism was released in which communion in the hand was claimed to be permitted. The pope had not been consulted! They just did it. Do you understand?

Then, the United States Bishops started jumping in. Bernadin and others began pressuring Rome and their fellow bishops. I’ve mentioned Cincinnati in some contexts before, but it’s also Rome’s sister city, named after the first man of Rome, Cincinnatus, and oddly enough the Cathedral is named Saint Peter in Chains. I’ve also mentioned how AmChurch issues seem to originate from Cincinnati but the press focuses on the louder proponents instead of the first proponents.

Three times did the Bishops push the holy father for ratification. And as Father Hardon notes toward the end of that clip, it was a prudential move by the Pope to prevent a schism to protestantism. Father also notes that the first thing the Protestants did in the 16th century was to deny the Real Presence in the Blessed Sacrament.

Note, though, the Bishops had already been telling their priests to distribute communion in the hand before the Holy Father ever reluctantly permitted it!

A Crooked Vote in the US Bishop’s Conference

Even after the bishops prevailed on the pope and forced the permission (which was heavily conditioned, as we’ll discuss below), the bishops conference was to have a vote to make communion in the hand pro forma to the Pope acquiescence  It’s no wonder Bernadin went from Cincinnati to Chicago. Father Hardon mentions the circumstances of the vote in the conference:

Consider that — not only did they force it to happen before the Pope allowed, then they made a mockery of the eventual conference vote by dragging out questionable votes. See, if you thought I was being harsh or overboard when I wrote What Really Killed the Catholic Church in America, I was being very nice about it. Just speaking the facts is harsh enough. It’s worse, though, because anyone who looked at the issue from the Papal documents knew that Communion in the Hand invites and is a practice of heretics and heresies against the Eucharist.

We are living history again. Father Hardon notes, based on the Pope’s quotes of earlier papal writing from around the Tenth Century, that communion in the hand was not stopped not only primarily to desecration but also primarily because of heresies against the real presence! (like today, again, as if the Wanderer Forum did not predict it, based on history, in the 70s).

One pope after another had to define the real presence, Paul VI quoted them!

That it was deliberate was a conclusion of Father Hardon, and he wanted to make it clear:  “Behind Communion in the hand—I wish to repeat and make as plain as I can—is a weakening, a conscious, deliberate weakening of faith in the Real Presence.” (also from Father’s 1997 Call to Holiness talk).

When Paul VI finally did give permission for the United States in 1977, he put several conditions on it. I will summarize the conditions here, however, you can read the entire decrees here.

Paul VI:  “The Pope grants that throughout the territory of your conference, each bishop may, according to his prudent judgment and conscience, authorize in his diocese the introduction of the new rite for giving communion. The condition is the complete avoidance of any cause for the faithful to be shocked and any danger of irreverence toward the Eucharist. The following norms must therefore be respected.”

The very first of the norms immediately states that this will cause division! Indeed, the holy father know what was coming:

“The new manner of giving communion must not be imposed in a way that would exclude the traditional practice. It is a matter of particular seriousness that in places where the new practice is lawfully permitted every one of the faithful have the option of receiving communion on the tongue […] There is a twofold purpose here: that none will find in the new rite anything disturbing to personal devotion toward the Eucharist; that this sacrament, the source and cause of unity by its very nature, will not become an occasion of discord between members of the faithful.”

The exact opposite was the case for about twenty years, and even in many places, priests, with the backing of their bishop, would insist that people receive in the hand.

Never mind that the altar rails were removed, and all the other signals that the Blessed Sacrament is the Real Presence. I know of places where you would have been denied Communion if you knelt and expected it to be placed on your tongue. Paul VI said they must not exclude traditional practice!

Pope Paul VI also added more norms in the 1973 act. This is important because he was telling the Bishops that belief in the real presence would fall apart:

The usage of communion in the hand must be accompanied by relevant instruction or catechesis on Catholic teaching regarding Christ’s real and permanent presence under the eucharistic elements and the proper reverence toward this sacrament.

The faithful must be taught that Jesus Christ is Lord and Savior and that therefore the worship of latria or adoration belonging to God is owed to Christ present in this sacrament.

(sorry, I had to add emphasis).

Maybe people think they get some better instruction today, but thirty years of hearing hippy jargon like “symbol of community” and outright censoring of the phrase “real presence” have driven our fellow baptized Catholics to nondenominational and new age neopagan lifestyles. I explained that I was told by a bishop that the eucharist was a sign of thanks, symbol of community. I never heard “real presence” except from my parents and old people. And when everyone else is saying something different than them, it causes confusion where there should be none. Paul VI nailed it.

I argue that today, when catechism curricula are more interested in diversity and ecology, topics better left for other classes, that Paul VI’s normative conditions have failed. That means there is no permission. Sure, there are some places where you will hear “real presence” but ask people what the Blessed Sacrament is… the majority don’t believe in it.

Father Hardon makes a further point in the talk on Neopaganism, that because truth is relative, that is, each person believes they make reality by their own mind, objects of faith are relative   “If you think that Christ is really present in the Blessed Sacrament, fine. If you don’t, fine.”  That’s the problem:  Jesus Himself said this was His Body. The general expectation that whatever you believe is fine, and the majority chose to make believe and live in their fantasyland.

Even in 2010, National Catholic Reporter tried to make the stats looks good and still make it seem that 54% have no idea or refuse to believe in the real presence. They said that 33% of Catholics don’t know what the Church teaches about the real presence, and don’t believe. Another 17% think it is a symbol, and 4% more just refuse to believe. They claimed 46% are knowledgeable believers. I don’t believe that, because if 46% of Catholics believed in the real presence, we’d not have the problems we face today, and the Mass would not be a hippy wreck of felt banners and guitars. Just look at the Church census and there isn’t anywhere near that many showing up. Maybe 46% of the people in the pews weekly believe. That would make more sense, but it appears only 1 in 5 show up. So that would mean 46% of 1/5th of the American Church believes, or roughly 1 in 10 Catholics. That is closer to my experience, but still optimistic.

Is it Disobedient to Argue for a Halt?

Some believe that because the Pope approved the practice, then to criticize or argue for a halt is to be disobedient. That’s not true and I hope this information helps. The Pope was forced to acquiesce, but even once he did, he laid down norms and conditions. To the extent that the norms and conditions are not being fulfilled, it is obvious that the practice should not be allowed. I think we should just scrap the idea altogether for use in a normal liturgy. It has a place for refugees and persecuted Catholics, hermits, and desert monks. It doesn’t need to happen in suburban utopia.

I wrote earlier, on the Feast of Fatima, that there was a trend in the feasts and Fatima that the Blessed Sacrament was the lynchpin. Plus, the angel’s focus was on the Blessed Sacrament and reparation for those that don’t believe. Yes, the sad part is that apparently a large number of nonbelievers wore a red cassock, at least by the votes and insistence on making communion in the hand the norm.

So exasperated with the historical evidence and the crisis of faith it produced, even in 1997, was Father Hardon, said “whatever you can do to stop communion in the hand will be blessed by God.” 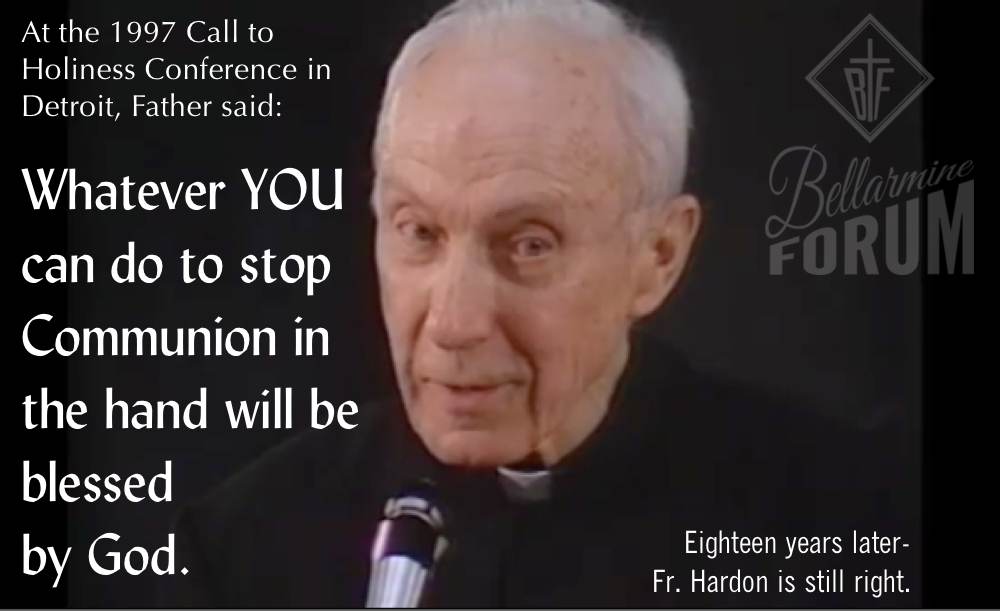 This article, Father Hardon: Stop Communion in the Hand Now! is a post from The Bellarmine Forum.
https://bellarmineforum.org/father-hardon-stop-communion-in-the-hand-now/
Do not repost the entire article without written permission. Reasonable excerpts may be reposted so long as it is linked to this page.