Comparing Barron and Bellarmine on Luther

I think it’s worth it to compare yesterday’s news of Bishop Barron’s praise of Luther to St. Robert Bellarmine’s opinion of Martin Luther.  In yesterday’s post about Barron’s post on Luther, I made several comments about Luther’s attacks on the Blessed Mother. Some thought I was wrong on this point.

Father Hardon, when discussing the Blessed Mother as Mediatrix, gives several quotes by Bellarmine on this very topic (thank God).

When Robert Bellarmine Lost His Temper 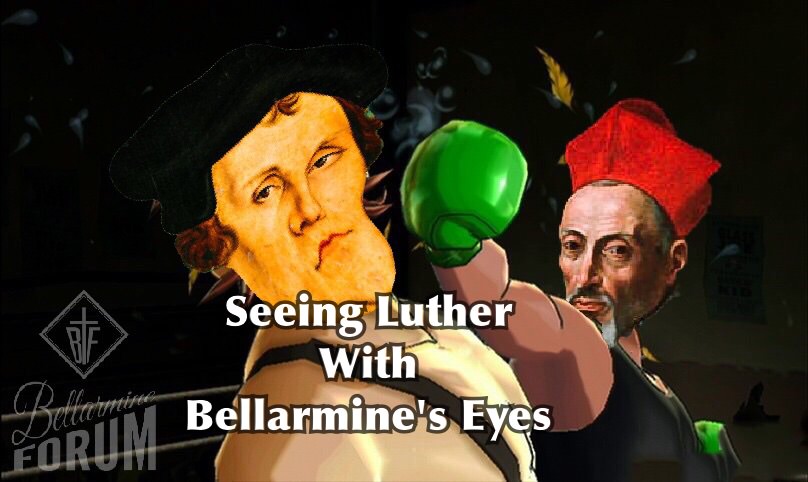 Bellarmine was known for having a pleasant disposition and he wasn’t known to get angry or rail on anything. So, the following story by Fr. Hardon should be apparent just how bad Luther’s diatribe against our Blessed Mother was:

Shortly before his death in 1546, Martin Luther delivered himself of an impious diatribe against the sanctity of the Blessed Virgin, loudly protesting that she was no more holy than any other son or daughter of Adam, no more holy than Luther himself. On this basis, Mary’s intercession through her merits was a pure fiction, excogitated by Scholastic theologians.

For once, Bellarmine seems to have lost his temper.

Preaching in the Cathedral of Louvain, on the Feast of the Nativity of the Blessed Virgin Mary, he calls out to his audience:

“If I only had the burning eloquence and deadly satire that this dastardly charge deserves! Do you, Martin Luther, dare to compare yourself to the Virgin Mother of God; you who once vowed perpetual chastity and then ran off to pollute yourself with a sacrilegious marriage; you who vowed voluntary poverty and then proceeded to despoil the very temples and altars of the Most High; you who pledged yourself to a life of humility under the yoke of obedience and then broke these solemn vows by flouting your proud disobedience in the face of all the Saints of antiquity, the Vicars of Christ and God Himself in His Holy Catholic Church!”

Not satisfied with crushing Luther’s brazen denial of Mary’s sanctity and corresponding merit in the sight of God, Bellarmine points out that it is precisely in virtue of her “ineffable merits that the Blessed Virgin stands as intermediary between Christ and His Mystical Body.

He keeps repeating, “The Head of the Catholic Church is Christ, and Mary is the neck which joins the Head to its Body.”

Having merited so well of God by her transcendent holiness, “God has decreed that all the gifts, all the graces, and all the heavenly blessings which proceed from Christ as the Head, should pass though Mary to the Body of the Church. Even the physical body has several members in its other parts—hands, arms, shoulders and feet—but only one head and one neck. So also the Church has many Apostles, martyrs, confessors and virgins, but only one Head, the Son of God, and one bond between the Head and members, the Mother of God.”

It’s pretty obvious that Bellarmine had no regard for Luther’s “fight” or whatever it was that Bishop Barron found charming about Luther.

On the side, I feel rather vindicated by my post yesterday and the topics I rose in relation to Luther. It appears that Bellarmine, albeit more succinctly, makes those same charges on Luther.

Should We Ignore those things about Luther in the Hope of Ecumenism?

One thing to note, however, is that Bellarmine raises the charges against Luther’s life. They are well founded and true. It’s difficult to tell if Luther’s error and his insistence on spreading those errors in a new religion were the result of persisting in mortal sin, or if those sins were from the errors, though.

One thing that I think we can apply is a maxim of human behavior. First, Fr. Hardon was apt to say that every person in a state of mortal sin is an agent of the devil.

I’d add that every person who persists in mortal sin eventually insults and rails against the Blessed Mother. Luther did the same thing.

Can you think of examples of this?

Meanwhile, is it worth overlooking these things in order to “open new ecumenical” dialogues?

Mary, Queen of Apostles, pray for us!

This article, Comparing Barron and Bellarmine on Luther is a post from The Bellarmine Forum.
https://bellarmineforum.org/comparing-barron-bellarmine-luther/
Do not repost the entire article without written permission. Reasonable excerpts may be reposted so long as it is linked to this page.