I have a pretty interesting idea about what might have been happening last month when Pope Francis (the Vatican) was discussing how Chinese Bishops are selected with the Chinese Government.

VATICAN DESPERATE TO MAKE DEAL “AT ANY COST” 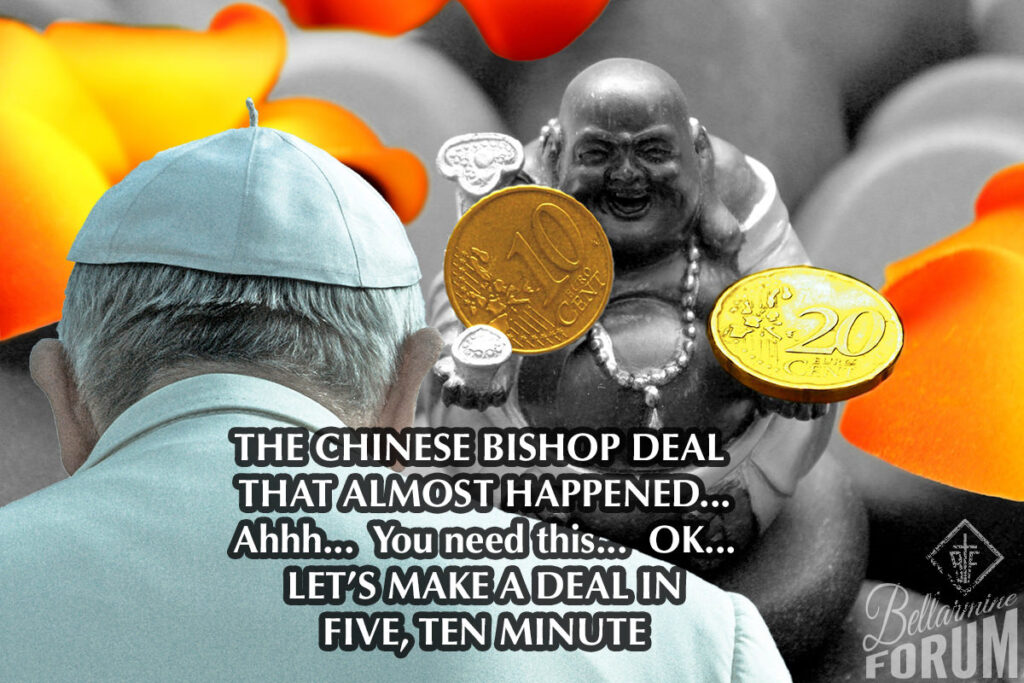 Recall, that back in February, news reported that Cardinal Zen feared that Pope Francis was selling them out in order to make a “big deal” with China. It was reported in the Catholic Herald and other places.  In that report, Cardinal Zen was quoted:

“And I can understand that the Pope is really naive…He doesn’t know the Chinese communists. But unfortunately the people around him are not good at all. They have very wrong ideas. And I’m afraid that they may sell out our underground Church. That would be very sad,” the cardinal said.

Then, last month, a total turnaround happened. The deal was not going forward, according to Cardinal Zen. He said, again reported by the Catholic Herald (p.s. I love Cardinal Zen, and you’ll see why in this quote):

The cardinal bangs his fists on the table as he says: “How can they believe they know the situation better than me? Better than Archbishop Savio Hon Tai-Fai, who is the number two in the Congregation of Evangelisation? We are Chinese! We have been in China so many years, teaching in the seminaries, spending six months a year there and seeing what’s going on with our own eyes. They don’t believe us. They don’t listen to us. So terrible.”

Zen says that the Pope’s advisers seem to want to “have success at any cost” with a Vatican-Beijing deal. But the cardinal insists that the Church should not bow to any earthly government.

“We still have so much strength in our Church. That’s a spiritual force. So why not use those forces to strengthen our position? Why don’t they understand that if you hold your position strong you can do something, you can achieve something?”

Despite last year’s furore over the deal, Zen now believes that the prospect of an agreement with Beijing has fallen apart.

Benedict XVI appointed Zen, along with 30 others, to a Vatican commission on China in 2007. Yet the cardinal says that, since Pope Francis was elected in 2013, the commission has “just disappeared”, without any official notice. He calls Rome’s lack of communication on the matter “an absolute impoliteness” and accuses those advising the Pope of not wanting to listen to the people on the ground.

So, there you have it. SOMETHING was driving the Vatican to make a deal, as Cardinal Zen puts it, “…at any cost.”

I’m going to make a confession to you, dear reader. There’s a lot of stuff that goes on in the Church that I just refuse to write about. For one reason or another, I’ve just avoided so many things. I think I should change that, and this little post is a step in that direction.

What follows is sheer speculation. As the writer I’m going to cite below calls it, “HIGH OCTANE SPECULATION.”

If we can make a deal that when I toss an idea out marked as speculation, that we both agree that I might not even believe it myself, but want to see if anyone thinks it might make sense (or has more information that proves or disproves).

One of my favorite perspectives to read comes from Dr. Joseph P. Farrell (who I’ve linked to before). He is not usually discussing matters in the Catholic Church, so when he is, I usually enjoy seeing what he has to say, because he is not “in the mix” of Catholic things.

In the last month, he was engaging in his own HIGH OCTANE SPECULATION about whether the SWIFT system was used to blackmail Pope Benedict’s resignation. I don’t think our readership is unfamiliar with this concept as it has been circulating in many Catholic circles for while.

What I’d like to point out here is Dr. Farrell’s observations that go beyond the discussion in Catholic circles:  he ties the use of SWIFT codes to seemingly extort Benedict to resign with a shift in the focus of pedophilia from being on the Church to being focused on Western leaders.

Here’s Dr. Farrell’s speculation.  Go to his site for how he sets the table here, as it is well done.  But, the operative parts:

Well, brace yourselves, because it’s a whopper: note that the actions taken against the Vatican were (1) a pedophilia scandal and (2) a severing of access to international financial clearing in response to Ratzinger’s statements about fundamentalist Islam. (And at this juncture, please recall that Francis I has indicated that Christians do have the right of self-defense against Islamic terrorism, a point often lost in the shuffle). This suggests, as the Russians were similarly affected by threats of exclusion from SWIFT, to the point of developing their own domestic, and ultimately parallel system of international financial clearing, that the Vatican may have been attempting to do an end run around the Western Financial blackmail (denial of service, effectively, to SWIFT), and to gain access to the system(s) being built out by and in Russia. In short, this means the Vatican was attempting to gain access also to the space assets that make international clearing possible.

If this reading of the covert warfare taking place against the Vatican by Mr. Globaloney (and vice versa, if my reading of the pedophilia scandal having moved from the Vatican to western politicians is true), then what one is witnessing is a long-term strategy and goal of the Vatican, which, for the moment may be summarized in the following high octane speculation:

(1) Intermediate goal: Gain access to other systems of financial clearing that are independent of that of the West. For the moment, this means the systems being put into place by Russia and China and, to a lesser extent, existing Japanese capabilities in the Pacific (and for a historical note, do not forget that connection between Japan and the Vatican, via Emperor Hirohito who deposited some of the Golden Lily loot in the Vatican bank, according to Peggy and Sterling Seagraves in Gold Warriors);

(3) Ultimate goal: build out an independent system of financial clearing by and for the Vatican and any allied churches.

If that high octane speculation is correct, then the USA and the Vatican are engaged in a covert war, just as are the USA and China and the rest of the BRICSA bloc, for those independent financial clearing systems, more than anything else, are a direct challenge to the US dollar reserve currency status.

Before readers here dismiss his point #2 on Vatican space satellites for communications, I want to remind the reader that last year Sandro Magister reported that the Vatican was trying to cease Vatican Radio (shortwave service). They haven’t done so yet, but they have cut staff.

AND HERE’S THE PITCH:  BISHOPS FOR BRICSA PAYMENT CLEARING?

It’s point #1 that caught my attention.  China is part of the BRICSA system — an alternate to SWIFT.

Could the Vatican have been so desperate to make a deal to join BRICSA that it was going to undercut the underground Chinese bishops as Cardinal Zen warned?

The Remnant had been following and reporting the SWIFT system issues. What bothered me was that I felt like it was only half the picture. Dr. Farrell’s take on it seems to be a better view because it takes into account more factors at play in all of this.

Better yet, it seems to make sense out of what is happening with the Vatican in places like China. I can only wonder as we have not the rest of the deals that the Vatican was putting on the table with China, but for that part that Cardinal Zen told us — namely, that the longstanding desire of the Chinese government to pick bishops was being discussed as a possibility.

Thank God that didn’t happen — but, why would they even want it so fast? Is it mere ego? no. I don’t think that’s the driver here. I think the ongoing susceptibility to another SWIFT payment attack is a vulnerability that everyone would want to patch up.

So, is it possible that this SWIFT payment clearing vulnerability is bad enough that the Vatican was possibly going to capitulate on permitting the Chinese government to select bishops?  We know that the Chinese can leverage in negotiation…

Or, is this entire financial fight of one of the world’s largest financial blocs (see that report here where I talked about the malthusian environmentalism being pushed at the Vatican) being contained to just money? (I think we can all agree that it’s not just about money).

Like all things, there’s power in the warfare because nobody is telling us the whole story (Vatican included)…  and given the news that just a couple days ago, the General auditor of the Vatican bank abruptly resigned without explanation, I think it might be a while before we get a well lit view.

What do you think? Is the Vatican’s war with Mammon limited to doctrine and words, or is money a weapon, too?

This article, SPECULATION: Pope Francis, Chinese Bishops, SWIFT, and Benedict’s Resignation is a post from The Bellarmine Forum.
https://bellarmineforum.org/speculation-pope-francis-chinese-bishops-swift-benedicts-resignation/
Do not repost the entire article without written permission. Reasonable excerpts may be reposted so long as it is linked to this page.