Lionizing Heresiarchs: Bishop Barron Praises Luther, Why Not Arius too?

Our English language has truly descended into such fluidity that this whole post is probably not even worth writing. Nevertheless, I feel compelled to say something. Bishop Barron has commented on Martin Luther, and some of the language he selected makes my stomach turn. I’ll get to his thing in a minute…  First, let me set the table. 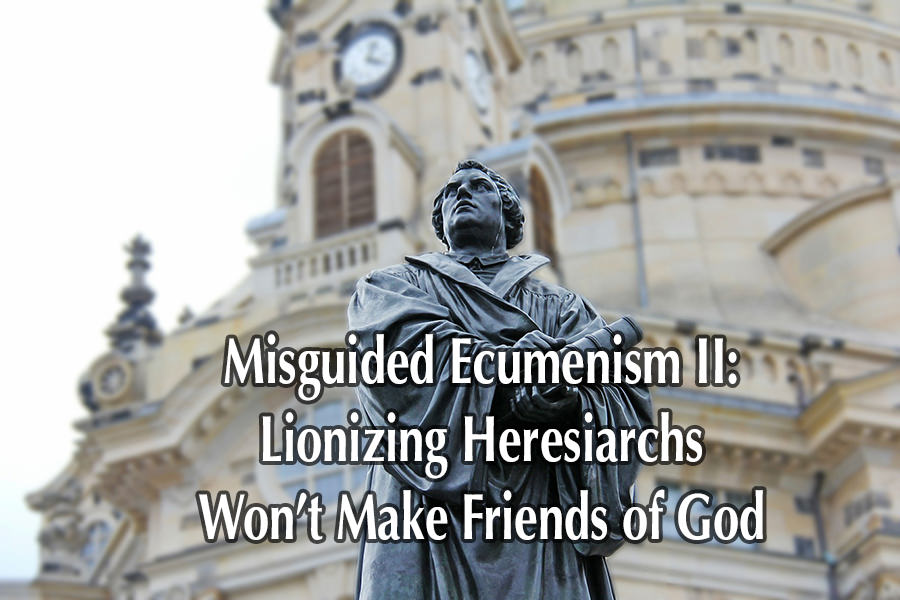 I will be the first to admit that what follows is lawyering. If you do not enjoy watching butchers work, then move along. In fact, click this link and read about Actual Grace instead.

Did it work? Dang. You’re still here. While I’m sharpening the knife and getting things set up, I’m going to talk a little.

I’m going to confess something to you:  I cannot understand the thrust in the Church today to glorify the heretic Luther. None. When God has given so many great saints to us, I don’t understand the need to constantly revise our understanding of this man who spewed more error than Arius himself.

It’s even worse that no one in the past ten years has uttered word one of Hartmann Grisar’s definitive study of Luther. Therein, one finds the forensic analysis of a man possessed by demons. Luther himself spoke of this possession from time to time. For Luther, it was constipation. For us, it is a man that selectively disregarded what God gives to us.

It almost seems as if the collective guilt of the hierarchy thinks it can redeem itself by normalizing the heresiarchs. If I were a betting man, I’d put ten dollars on that being revealed at final judgment as one cause of ecumania today. It’s as if they blame themselves for Luther. (remember this point…  we’ll get back to it in a minute when we get to Barron’s “fresh eyes”.)

Despite what John Dewey tells us, Religion is not man-made.

Lawyer slice #1:  Religion. We must recall that religion is the practice of rendering to God the worship and service He deserves. Actually, that’s not fair of me to call it practice, because it is traditionally understood as a moral virtue. Within that statement subsumes that it is practiced (and perfected).  BUT, let me reduce it to the simplest statement that I can:  Religion is doing what GOD has revealed to us and asks us to do.

Get that perspective:  what God has revealed. Religion today (thanks to the destructive errors of John Dewey) is instead taught as a sentimentality. Martin Luther, on the other hand, was centuries before John Dewey, and understood the definition I gave you.

Keep that point. Make a note.

Grace is not a mere Sentiment, But Related to Doing What GOD asks of us.

Lawyer Slice #2:  Grace. Grace is a gift of God bestowed on rational creatures for the benefit of their salvation. I know that hyper-semantics can take apart and begin to want more definition with that, but we could write volumes on this subject alone. At the end of the day, saints and doctors of the Church tell us that even though grace is a gratuity from God, we must perform good works to merit (i.e. earn) more graces.

My point for the purpose of this post is that grace and religion are related very closely. They relate back to God and our relationship with God. They are not nice feelings. They are not hokey pokey dancing (that link is more on misguided ecumenism).

No… grace has a real and actual meaning.

Mary is necessary to obtain Grace

Lawyer slice #3:  Mary. If you clicked the first link above and read that catechism article on grace, then you noticed something. When mentioning Actual Grace at the end came this:

Prayer to the Mother of God is also very efficacious: for she is “full of grace,” and “the dispenser of all God’s gifts.” “Let no one,” says St. Alphonsus, “consider this last title extravagant, for the greatest saints have so spoken of her, and the saints, as we know, were inspired by the Holy Ghost, the Spirit of truth.” Prayer to the Blessed Sacrament also confers many graces.

For those of you that stayed to watch the sausage get ground, that’s what you missed on that page. Mary is, as I posted the other day, necessary.

So let’s consider these four things together. Wait! You went back and counted only three.  hmmm…  Well, point number four is that guilt driving ecumania.

Luther destroyed Mary, hated the idea of Mary, and removed any devotions seeking her intercession.

Note: For this point alone, we should smack Luther as St Nicholas did Arius.

Mary is “full of Grace”.

One has to wonder how Luther could have done this if he was really wanting to do what God asks of us. From the Angel’s greeting (Hail, full of grace) to Our Lord’s gift of Mary as Our Mother, to the Apostle’s devotion to her…  Luther sought to deform what God revealed to us.

Can Bishop Barron Be Right to Praise Luther?

So, imagine today when I see Bishop Barron’s post on Aleteia titled Looking at Luther with fresh eyes

Luther was one of the most beguiling personalities of his time. And say what you want about his writings (I disagree with lots and lots of his ideas), they crackle with life and intensity, even in Latin! Though I’ve read and thought and talked about the founder of Protestantism for a long time, Ryrie has prompted me to squint at him in a fresh way.

It is obvious to everyone, Ryrie argues, that Luther was a fighter, taking on not only fellow intellectuals, but the curia, the Pope, and the Emperor himself. And it is equally clear that he bequeathed this feistiness to his followers over these past five centuries: Zwingli, Calvin, Wilberforce, Lloyd Garrison, Billy Sunday, Karl Barth, etc. There is always something protesting about Protestantism. But to see this dimension alone is to miss the heart of the matter. For at the core of Luther’s life and theology was an overwhelming experience of grace. After years of trying in vain to please God through heroic moral and spiritual effort, Luther realized that, despite his unworthiness, he was loved by a God who had died to save him.

This is why I say Ryrie has caused me to look at Luther in a new light.

After a lifetime of scrupulosity and interior struggle, Luther sensed the breakthrough of the divine grace through the mediation of the Bible. Hence, are we surprised that he would express his ecstasy in exaggerated, over the top language: “By grace alone! By faith alone! By the Scriptures alone!”

I think here of a distant spiritual descendant of Martin Luther, the Nobel laureate Bob Dylan. After his conversion to evangelical Christianity, Dylan wrote a lovely song called Saving Grace

Grace…  grace…  grace.    The problem is that Luther didn’t use that word the way we do. And the way it appears above is not what you’ll find in that catechism article. It’s a nice feeling instead. A Bob Dylan song. 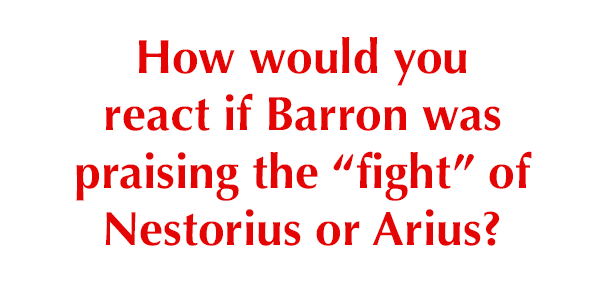 FAIR COMMENT:   Bishop Barron says at the end, “I realize that it might annoy both my Catholic and Protestant friends even to pose the issue this way, but would answering “yes” to both those question perhaps show a way forward in the ecumenical conversation?”

I think they are teaching Barron some of that guilt because he’s worried about ecumenism, and seems to be confused about grace.

Luther Was Not Complying With Grace

It’s easy. Luther was a tormented heresiarch. Whatever graces Luther was encountering were not cooperated with by Luther. Instead, he spewed error. Says the trusty catechism linked to above:

Man can co-operate with actual grace or reject it (Ps. xciv. 8).

Saul of Tarsus co-operated with grace, the rich young man (Luke xviii. 18-25) rejected it. The people who on Pentecost reviled the apostles rejected grace (Acts ii. 13), as also those who mocked at St. Paul when he spoke to them on the Areopagus of the Gospel and the resurrection of the dead (Actsxvii. 32).

It’s obvious that Luther REJECTED grace.  How else could he deform what God has revealed in the way that he did?

Even worse, Luther rejected the society of the Kingdom of God. How else could he reject the saints and prayer to them (especially the Blessed Mother)?

Lutherans today (and I am happy to have this discussion with them as we have had Lutheran readership here on and off over the years) need to recover three things that Luther left them bereft of:

1.) devotion to the Blessed Mother;

2.) life in the saints, including active conversation (prayer) with those who already live in Heaven; and,

3.) a return to understanding meriting grace again, and not in sappy sentimentalities.

The title of Bishop Barron’s article is that he has “fresh eyes” for Luther. I wish those fresh eyes would reiterate Grisar’s long and well researched expose of Luther instead.

How would you react if he was doing the same of Nestorius or Arius?

Should we be praising Arius’s zeal for dualism? Was it not even more vigorous than Luther’s fight?

Us normal folks don’t feel guilty about the errors of the 16th century, and we don’t need to advance ecumenism. Barron’s article comes across as a list of felt banner slogans and sentimentalities. That’s nice for beer, but it’s not teaching religion. I feel no need to wax poetic about a heresiarch. Let’s tell them about the Blessed Mother instead, and how she can bring real grace to them. That’d be real ecumenism!

Well, dear reader, I told you that this was a butcher job up front, and yet, you stayed with it. Should we be extolling heresiarchs as a way to bring people back to the Faith? or am I just being cranky?

I don’t think we’ll get any Gnostics back to the faith if we praise Arius. Similarly, we aren’t going to bring Lutherans back if we gloss over Luther’s errors as well.

Just like Saint Nicholas, we need to punch Luther in the mouth for spewing error, and preach truth, instead.

Our Lady, Queen of Apostles, pray for us!

This article, Lionizing Heresiarchs: Bishop Barron Praises Luther, Why Not Arius too? is a post from The Bellarmine Forum.
https://bellarmineforum.org/lionizing-heresiarchs-bishop-barron-praises-luther-arius/
Do not repost the entire article without written permission. Reasonable excerpts may be reposted so long as it is linked to this page.