Sometimes life throws a bunch of curve balls your way and it’s difficult in the midst to see what sort of trip you’re really getting into. Sometimes, your whole life can change overnight. Back in my twenties, I took a month long vacation from work, and I wasn’t sure what I was going to do with it, and as I watched the Mother Angelica live show one Tuesday night, I made up my mind that I’d drive down and see the show live the next day. That trip set in motion a wild ride that began when I met Mother Angelica.

She was exactly the same off camera as she was on TV. I got to meet her after the live show, and I gave her a gift of a St. Joseph image I created. I don’t really remember much of what we said, but I remember she asked from where I came. And she made me laugh. I think I was too surprised by her to make mental notes of the conversation. Remembering that we laughed, and that she admired the image of St. Joseph was all that I recall. I was impressed particularly because she was more herself in person. I was happy that the TV show was really like being with her in person, too! It punctuated all I had seen of her on the live show over the years as real. Not an act. The laughs, the thoughts, the insights, and even her emotions at things — it was apparent to me that she was real. 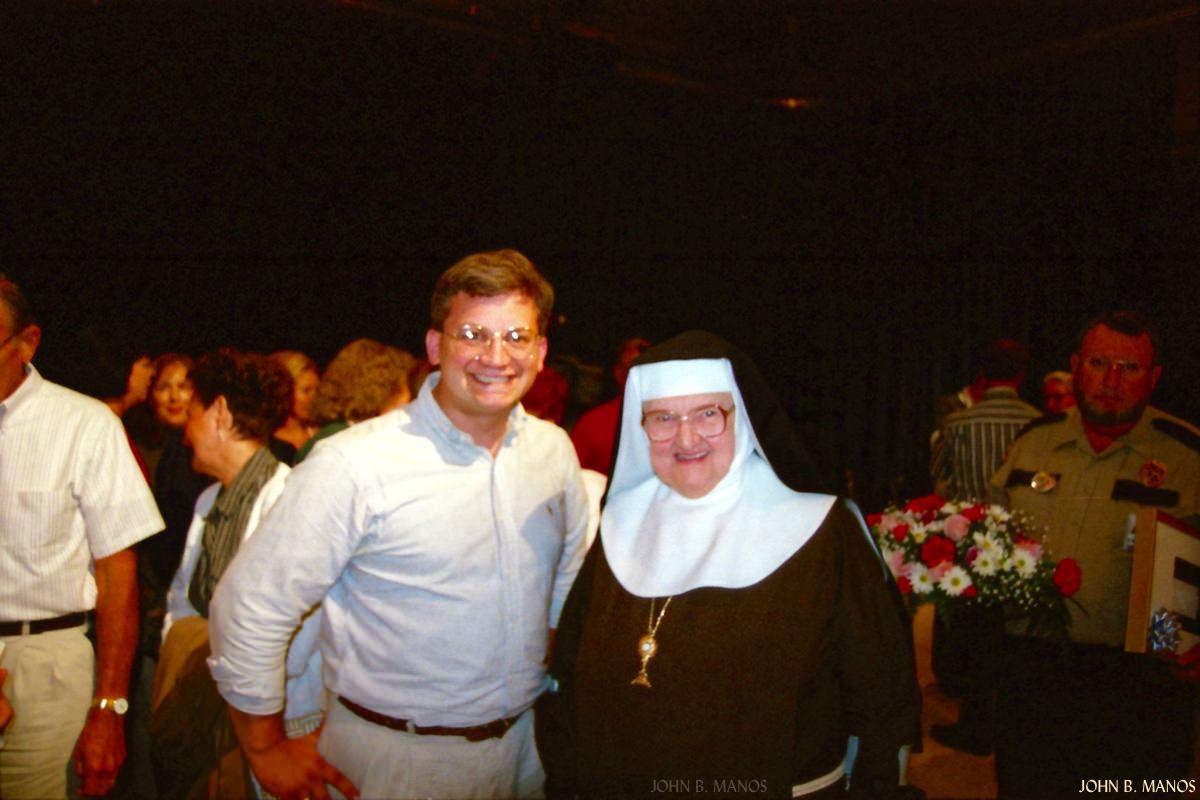 If you look in the left hand of the guy in the background, he is holding the image of St. Joseph I made and gave to Mother Angelica.

As the years pass, I am able to begin appreciating the paths of people God has put into my life. While God puts people in our lives for a variety of reasons, St. Ignatius gives four categories in fact, some of them begin to shine. Charlie Rice, Fr. Hardon, and Mother Angelica are certainly among the set of people that inspired me to holiness. Even before I met her, she had a style on her show that was matter of fact. She left you with an inspiration to know God more. To be better with God. All three of them did this, and each of them had their own style, but Mother would surprise me the most of them.

You see, back then you didn’t have many voices championing the Church as it ought to be. While Bishops were busy wreckovating parishes, lay people were trying to perform the sacraments, and stretch-pants dominated interpretive dance and lay readers, about the only places you could find someone else say “this is wrong” was the Wanderer and Mother Angelica. Seriously. There were other places as well, but they did not have the reach of those two. The Wanderer was derided everywhere, but it wasn’t what people said it was — it was always a great place to recount the errors of the day and compare the mess to tradition. And, before Mother Angelica got around, the Wanderer was one of the only places to get news on the vatican and the Pope. Mother Angelica, being on cable TV, was the other half.

Sunday afternoons was for reading the Wanderer. Tuesday and Wednesday nights were for watching Mother Angelica. Once people started watching her, they just didn’t miss her show. And during that show, they’d be inspired. Just like the whisper campaigns against the Wanderer, you’d hear people call her “Extreme” or other things meant to isolate her, but she wasn’t. Neither was the Wanderer.

Back to my story:  The next day, after I met Mother at the live show, I went to the televised Mass and kind of stuck around. I broke my glasses and needed to go to a nearby store for a tool to fix them. I ran into a couple that recognized me from Mass.  I’d learn later that they were each third order Carmelites. The husband said to me, “you’re going to work here, I can tell.”  I had no idea what I’d do. I was a chemical engineer and I liked explosions, worst case scenarios, and accident forensics. TV stations don’t do any of that.

I was sitting in an office at the Network, after Deacon Bill had them give me a tour. We were laughing, and in comes Mother Angelica. “I knew you were still here because I recognized your laugh.”  I have a laugh that is known to those who have been around me. Shortly before this trip in fact, a project manager at the consulting firm called me into his office and asked me to tone down my laugh. It was a strange moment. This man wore a flattop buzz cut, short sleeved shirts with polyester ties, and had nerf toys on the shelves behind his desk. Yet, he told me: “Your laugh will harm you professionally.”  I was never really sure what to make of the advice. I obviously hadn’t done anything with it, and it was the very thing that brought Mother Angelica to me now.

“I don’t know what I’d do. You don’t blow things up and you don’t kill people. What would I do?”

That’s how it started for me and Mother Angelica. A week later or so, I’d get a call from Deacon Bill and he’d figured out something I could do that would help the Network.

I was discussing this string of events, greatly condensed, with an Italian guy in my work group. He was also an engineer, utterly practical, and Italian. His name was Fran and he was one of the major actors in making all this happen. See, a few months earlier, I saw a dream client job utterly wrecked by the CEO of that firm. Not only was the client upset, but the budget was impracticable with the discount introduced. In the wake of that, Fran suggested that because I had months of vacation time accrued, I’d be better to begin taking it so to avoid being a creditor at the bankruptcy (Fran, like Mother, was all about speaking his mind plainly). So taking his advice lead to that trip. Now, when telling him that, and explaining all the little coincidences that fell into place, Fran threw his hands up into the air:  “Stop! Stop!” he said, “I refuse to believe that God put me here just to be a player in your drama!”

It made me laugh, and he laughed, but that’s exactly what the whole ordeal made apparent to me:  we are each players in each other’s dramas. God makes it that way. With Mother at the center of it, it would set the tone of the years to come in my life — and it was the charm of Mother Angelica in the middle of it all. Her way of being, and her discussions, whether on the live show, or then in person, left me with a desire to know more about God. He wasn’t an idea to her:  He was a real person. As sure as talking to Mother Angelica herself, God was a living Person actively engaged in my life, and everyone else’s.

As many of the stories about Mother Angelica and the wild circumstances about her trust in God and abandonment to Providence were shared in the recent weeks, I can say that she was a great example in real life and for me. I can say that of all three, Charlie, Fr. Hardon, or Mother, but for Mother, it was definitely her goal with EWTN to make people aware of the living Persons of God.

I think that’s the other thing in all of this:  Mother Angelica spoke plainly. So did Charlie and Fr. Hardon. All three of them would make me laugh and had humor. You just don’t hear that today. I hope you hear it here. But in general, there is a synthetic malaise …  a “decorum” if you will… that is settling onto the scene again. It’s fake. Nothing about these people, nothing about Mother for that matter, was fake. Thank God. I think that is an effect of holiness.

Day to day, she was fun, too.  Shortly after beginning to work at EWTN, I worked in a shared office that had a dry erase board near the door. Mother would walk past this door and be able to see the dry erase board. Among the people in the office, we had been leaving notes to each other, silly ones. Someone wrote “antidisestablishmentarinism” on it. I wrote in reply the longest non-technical word:  floccinaucinihilipilification.

The next morning I come in and I see this: 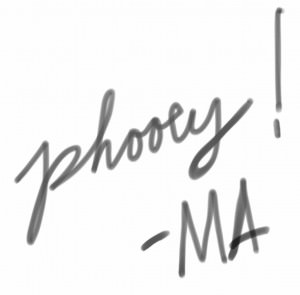 Then, I was walking across the studio with a coffee in my hand. Mother Angelica had been in there taping a show or something. She calls me over and grabs my hands (I’m still holding my coffee). She swings my hands and all I can think of is the coffee is flying out, but she had a big smile on her face. “Well, did you get my note?”  The coffee was spilling on the floor. But she was intently staring at my face and smiling, swinging my arms.  I stammered!

Then, she was laughing because as I realized that she really wrote it, I didn’t know if she was joking with me or serious! She knew she had my goat!

I’ve missed Mother’s plain speaking and love of God for some time now. I kept hoping she’d rally and have one last hoorah before she went on, but that wasn’t meant to be.

Eternal rest grant unto her, O Lord.  I’m looking forward to catching up with her again in the life to come! She definitely changed the face of the Church in America and staved off some darkness in the 90s. More importantly for me, she was a fun and good friend to me!

This article, Farewell for Now, Faithful Friend, Mother Angelica is a post from The Bellarmine Forum.
https://bellarmineforum.org/farewell-for-now-faithful-friend-mother-angelica/
Do not repost the entire article without written permission. Reasonable excerpts may be reposted so long as it is linked to this page.