The Resurrection Shook Hades, But Has It Shaken You?

Although chocolate and Easter egg hunts are fun, Easter is about someone returning from the dead. When confronted with the reality that the Easter celebration is a celebration of a man’s return from the dead, three things should happen:

No matter your faith, or lack thereof, the historical account of a man, Jesus, rising from the dead should cause you pause and challenge you. If it is true that Jesus rose from the dead, then it is true Jesus was not just a man, but the Messiah and the Son of God.

Reading the Gospels’ accounts of the Resurrection should test your faith. There are seemingly different versions regarding the timeline of events. This is because the Gospel writers are relaying the events as they understood them, some with more detail. Had there been a conspiracy to fool the Jews that Jesus rose from the dead, then the writers would have the same story. We know that women first found the tomb empty. Mary Magdalene first discovered the missing body. There was at least two angels (John), but Matthew mentions only one.  Mary Magdalene encountered Jesus in the garden, according to John and Mark.

Despite small differences in who saw what when, one fact remains: there was no body. Was it stolen or did Jesus rise? Once the missing body was discovered and word spread that Jesus rose from the dead, Jewish scribes paid the tomb’s guards to say that the disciples stole the body (Matthew 28:11-15).

In response, Pontius Pilate wrote a letter to Claudius about this rumor and about his guards taking the money: “[T]hough they took the money, [they] were not able to keep silence concerning that which had come to pass, for they also have testified that they saw him arisen and that they received money from the Jews. And these things have I reported for this cause, lest some other should lie unto thee and thou shouldest deem right to believe the false tales of the Jews.” (Gospel of Nicodemus, XIII).

The mere possibility of Jesus’ Resurrection should cause you to reexamine your belief system.

The evidence of a Resurrection outweighs any contradictory evidence. A number of individuals report seeing Him, there are numerous written historical accounts (canonical and non-canonical books), and individuals suffered excruciating deaths on account of it.

Confronted with the evidence of Jesus’ Resurrection you should wonder if you truly believe in it. You may deny the evidence and choose not to believe it. Yet, Pascal’s challenge to gamble on that which has better odds may lead you to believe in it. Without Jesus’ Resurrection, Gentiles have a slim chance for salvation. Remember, according to Jewish history, and St. Paul, the Jews are God’s chosen ones. They are saved, not Gentiles. Through Jesus, though, all have a chance. By his body Jesus saved all flesh.

Intellectually, you may believe it, but do you believe it in your heart?
THEN ASK YOURSELF:
Are you willing to die for that belief?

Ironically, it is easy to intellectually believe in something, but restructuring your life and to die for that belief is another thing.

Seeking a greater understanding of the Resurrection requires prayer, research, and faith. This strengthens belief since these are the foundations to belief.

Jesus’ Resurrection demands a conversion of the heart. Bad habits may require tilling the soul longer, but your bad habits oblige you to have the heart of Jesus. The heart of Jesus is strong in leadership but merciful, having pity on the abase soul, understanding the needs of others, and suffering through service.

It presses on the mind and soul conformity to the Gospel’s hope, to the Ways of Jesus, and repentance. The world says there is no sin, or that Christianity means “sin away.” Fornication, abortion, homosexual activity, economic oppression, political lies, journalistic hypocrisy, pornography, gossip, raunchy movies and music, and disobedience to Christ’s Church, are the commandments of this world. Belief in God through Jesus’ Resurrection means you cannot participate in these worldly commandments through deed, financial support, or affirmation.

Though, if you don’t believe in Jesus’ Resurrection, then you must ask yourself, what you do believe in? Do you believe in God? Believing in God is a start and a studious path should lead to the Resurrection because Jesus fulfilled the Messianic promises. Not believing in God results in no moral compass. No God means you’re merely an animal, so, you may act as an animal. 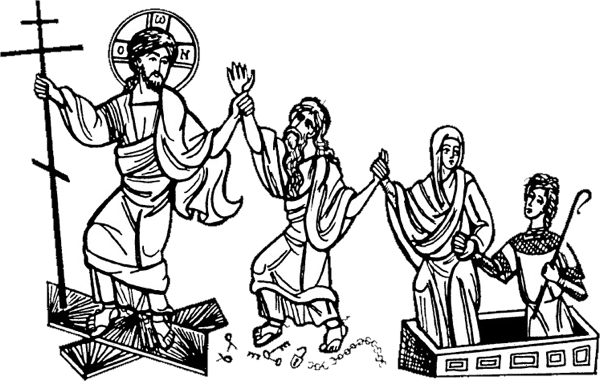 If this Means Anything, Has Your Life Changed?

“It is good therefore to learn the ordinances of the Lord…and to walk in them. For he that doeth these things shall be glorified in the kingdom of God; whereas he that chooseth their opposites shall perish together with his works. For this cause is the resurrection, for this the recompense.”

(Epistle of Barnabas, 21:1. Note: this text is non-canonical, but some early Christians cited it, and it is in the 4th century Codex Sinaiticus at the end of the New Testament).

This article, The Resurrection Shook Hades, But Has It Shaken You? is a post from The Bellarmine Forum.
https://bellarmineforum.org/the-resurrection-shook-hades-but-has-it-shaken-you/
Do not repost the entire article without written permission. Reasonable excerpts may be reposted so long as it is linked to this page.