Fr. Hardon’s Analysis of Bellarmine will help you Defeat the Devil 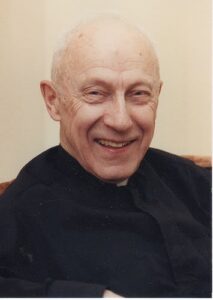 If you ever listened to Fr. Hardon in real life, or you’ve heard the tapes, CDs or recordings of his, you know the clues he’d give you in the middle of a sentence, “but… what a crucial adversative this is… but… without exception.” He’d grab your attention and get you to pay attention. He had other ones, too, such as “I have this word underlined, encircled in red, and highlighted in yellow.” After a while, you’d chuckle. There’s one phrase he reserved for one instance though. In at least three different talks across fifteen or so years, I remember hearing Father say “memorize this logic.” Memorize? Father never tells me to memorize!

One thing that Bellarmine teaches us is that the root of evil is error and the root of error is ignorance. If we want to root out evil, we must teach the truth. It is not enough to believe. With God’s grace, which means reflection and prayer, you must understand what you believe.

This one quote flows in so many places of Father Hardon’s talks, though. It is most prominent in this warning Father would give over and over. Father Hardon presses into a succinct idea exactly how the devil gets people to do evil. A long quote below, but pay attention for Father Hardon’s instruction to memorize!

The evil spirit is engaged in a demonic apostolate throughout the whole human race. And we are not only to combat the evil spirit, but if we are to successfully overcome demonic temptation, we must, as the holy father emphasizes, engage in angelic apostolate. […]

[The devil] is not only a liar, but the father of liars. The truth is simply not in him. Or, more accurately, the genius of Satan is to deceive the human mind in order to seduce the human will. Memorize that logic. Satan knows that all the evil in the world begins with error. Let me repeat. Satan knows that all the evil in world begins with error. In other words, all sin in the human heart begins as untruth in the human mind.

The secret of avoiding sin is to avoid error. How we need, Dear Lord, how we need to know that today! There is no other way of avoiding sin. The devil knows this! That is why he is such a zealous propagandist of falsehood.  Take some of the popular myths of today:

So the litany of errors goes on, and it has been going on since the dawn of history. Only now, it has means of communication that stagger the imagination and terrify the believer for the influence it is exerting on hundreds of millions of minds everyday throughout the world. The devil would not be an intelligent being as he is if he did not know how to hide his diabolical desires!

Father Hardon recommended a strong devotion to the angels to help us recognize the deceit and lies of error.

Servant of God, Father Hardon, and St. Robert Bellarmine, pray for us!

In God’s providence, Lucifer is allowed to mislead so many leaders in our day in order to arouse our zeal to join the Archangel Michael in protecting our contemporaries from the Luciferian conspiracy against the truth in the modern world.

I could (and maybe I will at some point) find at least three or four other instances of Father Hardon stating:  memorize this logic:

We must teach the truth, speak the truth, and invoke the angels to help! (why don’t we hear priests and bishops teach on telling the truth anymore?)

Father Hardon said “the secret of avoiding sin is avoiding error.”  That’s also why fathers of the Church say that the beginning of the practice of chastity is to tell the truth. In fact, the practice of all virtue begins in telling the truth.

This article, Fr. Hardon’s Analysis of Bellarmine will help you Defeat the Devil is a post from The Bellarmine Forum.
https://bellarmineforum.org/fr-hardons-analysis-of-bellarmine-will-help-you-defeat-the-devil/
Do not repost the entire article without written permission. Reasonable excerpts may be reposted so long as it is linked to this page.