This is Why Fr. James Martin Makes no Sense – Your Annie Oakley Decoder Ring 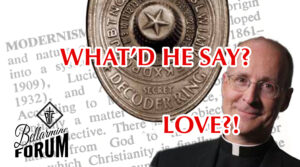 I promise you that this post will become a decoder ring for you to read Fr. James Martin and others in the AmChurch. You’ll laugh and rub your hands with glee as you will be able to predict exactly what he’ll say about things. You see, he’s just a modernist, in my humble opinion, and he’s following a tightly wound script of programmed language. Language that was weaponized by modernists in the Church that were applying situational ethics. The ongoing Marxist march and sex revolution in our midst relies on these tightly wound phrases.

The Opening Salvo of Situational Ethics in 1966

In 1966, James F. Fletcher wrote what is considered the definitive statement of situational ethics. In it, hell bubbled forth on the printed page as he declared:

The first problem with the statement is that it is a lie. But, it should be clear by now that truth is optional in situational ethics. It has something to do with John Dewey’s definition of religion being mere personal feelings (as opposed to what God revealed).

“Catholic” Weaponization of Situational Ethics Against the Sacraments in 1989

In span of a short twenty years of so, situational ethics was fully weaponized in the AmChurch, where so-called Catholic moralists such as Bill Huebsch’s Rethinking Sacraments, a book used for parish renewal and similar, declares that “We should encourage, not discourage, lifetime commitments of love from the ordained and from the homosexuals” (p. 145) and asks why the Church “should prevent homosexual men and women from entering into lifetime commitments.”

nota bene: the author of that book has a “study guide” PDF online and it, in my opinion, desacralizes the sacraments. If you are not prone to vomiting, can throwing your iphone when reading preposterous, and your device on which you read this has been blessed with holy water, you can see that online here. I’m not responsible for damage because I warned you!

I want to underline something, though. The study guide reveals what Fletcher emphasized as well:  shifting the definitional purpose of relationships from what God made them to “love.”  On the last page of the Huebsch study guide, he has matrimony with the preconciliar focus on “A focus on procreation and the legal bond of the marriage”. Huebsch’s Rethinking would have us consider “An equal focus also on the mutual love of the couple.”

This title is merely representational of many others, though.

Love – the Word Pregnant with Error after Mating with Modernism

I don’t really need to rehash how mixed up, ambiguous, and fraught with confusion the word love is in modern English. English itself so slippery today that Webster’s dictionary concluded some years ago that it was impossible to be precise anymore. The word love is the poster child of what’s wrong with it. Love means liking something. Love means carnal acts. Love means something nice. On and on.

Worse, any sinner listening to temptation is ripe for more error. If they can justify that “love is fully served” (Fletcher, supra), then it’s all good!

We can make it all make sense if love is the topic. It’s not just for hippies anymore!

This confusion and ambiguity is the lovechild of modernism and situational ethics.

“MODERNISM. A theory about the origin and nature of Christianity… religion is essentially a matter of experience, personal and collective. There is no objective revelation from God to the human race, on which Christianity is finally based, nor any reasonable grounds for credibility in the Christian faith, based on the miracles or the testimony of history. Faith, therefore, is uniquely from within.  In fact it is part of human nature, “a kind of motion of the heart,” hidden and unconscious. It is, in Modernist terms, a natural instinct belonging to the emotions…

I trimmed that excerpt to focus on two things:  religion is sentimentality (cf. Dewey’s expression of religion as a sincere feeling) and nothing objective but subject to emotion.

In short, modernism sees feelings as the validator of religious correctness. And, it is only experience.

All of that is a very contorted way of saying, if it feels good to you, then it is right. And when coupled with the concepts above on the sacraments, you can now see why dialogue appears impossible with many Catholics today.

I don’t want to linger for long on the Nashville Statement. I can say that’s great for them because they do at least see that God did reveal Himself to us, and they want to proclaim it. Sadly, however, the statement itself is flawed in as far as it is incomplete. It has no recognition of the lethal effects of contraception on matrimony.  Worse, contraception leads to homosexuality. So, the Nashville statement authors cannot recognize that contraception begets homosexualty and abortion [nice pun, right?]. It’s true, though. Because of that flaw, the statement can be said to be only a partial rejection of situational ethics.

Meanwhile, Cardinal Sarah has said clearly that the Church must continue to proclaim the words of Our Lord that homosexuality is “at odds with nature.”  I despise the cheap way America Magazine re-characterized it by saying “must proclaim” as if it was never said before (hello… anybody read St. Paul? it’s been something Church has said since the Apostles). I guess America Magazine’s editors never read the Apostles, though. Fletcher and Heubsch tell us none of that matters… only love. So it is with Martin.

If you want to test the weaponized language, just read the comments from people that strongly agree with Fr. Martin on a regular basis. One comment on Martin’s reply to Cardinal Sarah says “The reality is that our attraction to another person, even if it ends in sexual intimacy does take away one iota from our relationship with God.”  [huh?]

Another: “Father Martin, please keep praying for people like Cardinal Sarah, so they could wake up from disillusioned ‘truths’ and open their hearts to truly love the Church and all of us who are part of it and all those who trust in Christ’s all-embracing grace and unconditional love. Lord have mercy on us, sinners. Including the Cardinal.”  [God’s love conquers any truths?]

And:  “And here comes the divisiveness among Catholics. People we have enough division in this country already. Can’t we simply remember that Jesus said Love they Neighbor as thy self. ? When it’s our time to depart this world, God will judge, we should not.”  [the only rule is that we “love”]

I could gather many more. But If you go look and keep the modernist and situational ethics concepts in mind, you will see a common thread:  What God said doesn’t matter to them, unless it is experience and love.

A Perfect Manifesto of Modernist Situational Ethics from Fr. Martin

The Washington Post compiled a series of “Nashville Statement” tweets from Fr. James Martin. Armed with the information above, take a read of these and tell me if this isn’t a synthesis of modernism and fletcher:

I want to highlight something to iron my point in. Fr. Martin makes the expansion of baptism in point #4 above that by being baptized they are “full members”.  This is a term Heubsch emphsizes in Rethinking Sacraments.  In the worksheet by Heubsch to which I linked above, you will see Huebsch say that baptism used to be “A way to erase Original Sin” but in Heubsch’s new way, it is “Invitation and entry into the community of God”.  Full membership?

This analysis can go on and on. But it should be clear from the citations above that what ever else Fr. Martin believes, he seems to use the same language as Heubsch and Fletcher. Given that, it makes me wonder if he doesn’t also believe the rest of the modernist creed as well. Poor guy.

Do you see more secret phrases in their language? Let me know in the comments!

This article, This is Why Fr. James Martin Makes no Sense – Your Annie Oakley Decoder Ring is a post from The Bellarmine Forum.
https://bellarmineforum.org/fr-james-martin-makes-no-sense-annie-oakley-decoder-ring/
Do not repost the entire article without written permission. Reasonable excerpts may be reposted so long as it is linked to this page.