I was rather curious as the news came out last week that a group at Harvard wanted to “study” a satanic ritual. I was surprised that anybody would be surprised that ivy league schools host satan worship. Ever heard of Skull and Bones? That black flag with a skull on it isn’t announcing allegiance to God. It’s not a mere token of college life, and the ties of that group to the Russell Trust are well known. Same with a few of the so-called “final clubs” of Harvard. Many people shake it off and say those are meaningless social things. They aren’t, though. And those groups advertise what they are about in the symbols they use. So I was surprised people were surprised.

It was surprising, rather, that the national news ran the story. You almost get the sense that they wanted to see an Apocalyptic battle between good and evil. (Actually, there was one! See below).

The news coverage did serve to get everybody worked up (about time people notice this stuff is going on). It’s good to know that at the end of the day, people still realize that the first commandment means something and that people across the nation prayed in reparation for it. (Fatima and Akita asked for this sort or reparation to be done, so I’m glad to hear that people resorted to this as the remedy!).

It’s worth paying attention to the way the student group described their purpose, though.

Student Club was Merely Being Ecumenical

(ok… I know they aren’t ecumenical, but the language of this student group sounds like the false ecumenists!). It was reported in several news stories that the purpose of the occult rite was:

The student club, meanwhile, said in a statement that the performance’s purpose was not to denigrate any religion or faith, but instead to “learn and experience” the history of different cultural practices.

Different Cultural Practices? Last time I checked, God was pretty clear about some “cultural practices” — in fact, He commanded us not to have some cultural practices right in the first Commandment:

“I am the LORD your God, Who brought you out of Egypt. You shall have no other gods before Me.”

Jesus reaffirms this Commandment in Matthew 4:10, stating it “You shall worship the Lord your God and him only shall you serve.”

So, God Himself has told us through Moses, and again with His own Divine lips that one “different cultural practice” that will destroy us is serving or worshipping some other god. Satan is not God, nor is he the LORD… That’s easy.

So, engaging in the black rituals of satan worshippers is not merely alternate religion or marginalized practices, or minority culture… it is sin. That is, it is deadly error.

The children of the father of lies kept twisting themselves into legitimacy by turns of phrase, though. That same article linked above carried several other quotes that show a strange rhetoric surrounding this event. For instance, the student group had some sort of mumbo jumbo about marginalized groups:

“reaffirm their respect for the Satanic faith and to demonstrate that the most powerful response to offensive speech is to shame those who marginalize others by letting their own words and actions speak for themselves.”

What? Whatever else satanism and its followers are today, they aren’t marginalized. Almost all of Hollywood, and certainly a large part of the finance industry (that is, a good segment of those who wield power and money in this society) have overt ties to the occult. It shows that, just like their father, they must twist concepts on emotion to sow error.

False ecumenism pays no attention to error, and seeks to be united to error and people with blind regard for God. As Fr. Hardon spoke on it, he said:

Since the close of the Second Vatican Council, many Catholics have sincerely initiated relationships with the churches separated from Rome without taking into full account the doctrinal foundations on which true ecumenism must be based. True ecumenism is the Christian unity that Christ Himself revealed. It is the unity which is not merely verbal but real. It is the unity which preserves all the essential elements of faith and morality prescribed by the Savior for those who are to be His followers in truth and not only in name.

The student group and satanic church that conducted this media event seem to want false ecumenism. They have no regard for what God said — it is pretty clear — there is only one LORD our God, and we shall serve only Him. If anyone is marginalized here, it is the false gods and they are marginalized by God Himself.

You can’t reconcile or unite with satanism and serve God at the same time. It is impossible (that’s why God forbade it, too). The only way you can do that is how Eve did it in the Garden… that is, by sinning (and thereby destroying your own soul). She was the first gal to sport a “coexist” bumper sticker and seek interelligious dialogue with the underworld. You must pick a side: God or the Liar.

There are so many other directions this discussion could go, though:

Despite the other things they said, I noticed the coded language from the Archdiocese of Boston’s statement:

“This activity separates people from God and the human community, it is contrary to charity and goodness, and it places the participants dangerously close to destructive works of evil.”

They called it mortal sin by referring to the effect (separates from God) and the side effects “dangerously close to destructive works of evil.” Good for them! Even better though… the Archdiocese, Fr. Richard Clancy lead it from MIT Chapel to St. Paul’s, thereby they , organized a Eucharistic procession right past the hall intended to hold the ritual.

Plus, this is the eve of the feast of Fatima, and an International Rosary procession had been held in Portugal today.

Many Catholic headlines are saying “Prayer works.” No d’uh. we know prayer works. Marching Jesus out in person through the streets works, too. Too bad it takes the threat of overt satanic worship to get us off our duffs, though.

When is the last time Jesus got to walk past Harvard?

We should do this more often!!! After all, the satanist scattered away… there was no public black mass held there tonight.

Maybe we should be bringing Him to more places around America (like the Baphomet statue in Oklahoma) — isn’t that serving Him – by giving Him the chance to be our God? Isn’t the lack of this why Fr. Hardon said the Devil was so strong today?

At the end of the day, the Apocalyptic battle did happen. It just wasn’t the kind the news hoped for — perhaps they wanted a clash between rowdy protestors and images like those from the streets of Ukraine. That’s not how it plays out when the battle is in the invisible world, though. Jesus, the Conqueror of Death and Lover of Mankind, walked the street and the enemy scattered: 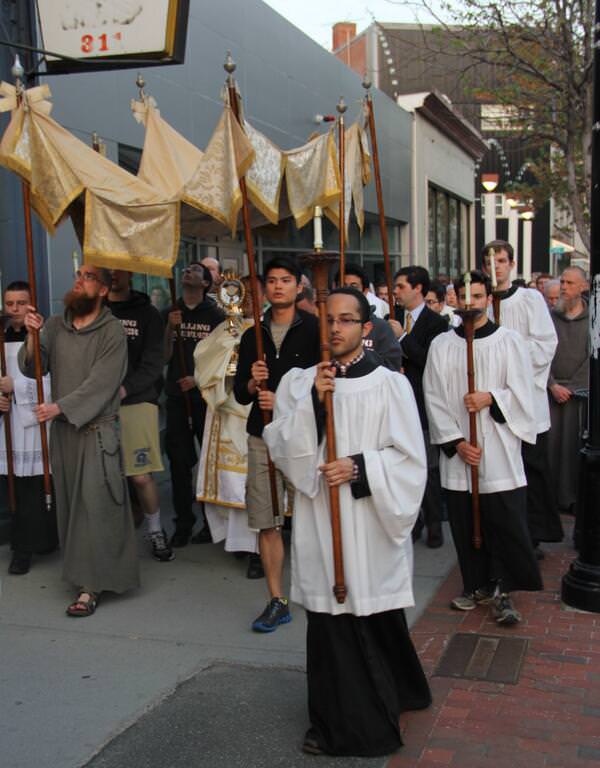 Here’s an encouraging tweet showing 2000 people one their knees before Jesus in reparation:

Over 2,000 people attended Adoration at Harvard in response to the proposed Satanic "Black Mass." Alleluia! pic.twitter.com/dsabgzgQpr

This article, God Arises, His Enemies Scatter (False Ecumenism at Harvard) is a post from The Bellarmine Forum.
https://bellarmineforum.org/god-arises-his-enemies-scatter-false-ecumenism-at-harvard/
Do not repost the entire article without written permission. Reasonable excerpts may be reposted so long as it is linked to this page.