The controversy over Common Core State Standards that is raging across the country has not spared Catholic dioceses, which are also wrestling over whether to implement them. When challenged, some dioceses point to the support they have received from the United States Conference of Catholic Bishops (USCCB), the bishops’ national bureaucratic arm. (recall our coverage of Catholic Common Core Initiative here)

That support comes in a number of ways. One is an April 21, 2014 FAQ [frequently asked questions] document, available at the USCCB website. The FAQ document describes opponents as believing that these standards are a “federal overreach into schools, loss of parental choice, and a loss of academic rigor.” To respond to these concerns, the paper says it must “consider them through the broader lens of the purpose and mission of Catholic education and the principle of subsidiarity.”

The purpose of a Catholic education “aims at the formation of the human person in the pursuit of his ultimate end and the good of the societies of which he as man is a member and in whose obligations as an adult he will share.” As a man’s “ultimate end” is “to live with God for all eternity,” true education – Catholic education – must “intentionally promote the Gospel of Jesus Christ with the purpose of forming Christian men and women to live well.” Many documents are quoted but this is their gist.

The USCCB document also reaffirms that parents are the first educators of their children as a God-given responsibility, to be aided and supported by the Church and by the “civil community,” “both have a vested interest and responsibility in education of the young.” To this end, it praises the goals of high academic achievement, a moral life, and Catholic spiritual formation. None of this is contended by opponents of the Common Core standards.

Nor is the fact, as the FAQ document explains, that “standards” are nothing new to Catholic schools. However, the standards of the past were state standards – and many have been enormously problematic. Republished on the Veil of Innocence website, the late Dr. William Marra wrote in 1969 [“Sex Education: The Basic Issues”] about the stealth implementation of sex education into public and parochial schools: “the typical sex education program (for instance, the program adopted in the Rochester Diocese, or the one outlined in the Guidelines issued by the New Jersey State Board of Education) impresses most adults as just this: indecent exposure, through words and visual means, to young children of actions and anatomical details which they as mere children were never meant to hear about or see.” (emphasis added)

Those were the good old days. Today’s parent – whether their child is in a public or parochial school – is faced with curricula that contains not only inappropriate sexual content but values reeducation (clarification), logic-defying pedagogy, revisionist history, and mind-numbing political propaganda. When this curricula is generated in response to the national Common Core standards and disseminated around the country, parents fear a system in which it will be increasingly difficult for Catholic schools to exercise their distinctive educational goals.

[ed. note: as shocking as it sounds, even popular editorial cartoons have picked up on this:] 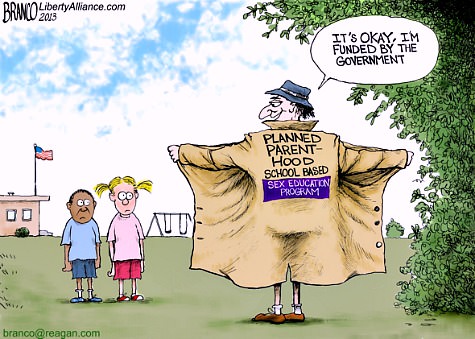 Is that being paranoid? Hardly, when Catholic schools and dioceses are reminded that, before rejecting these national standards, they “must take into consideration the horizon of the local, state and national education landscape and the influence and application of the CCSS. To ignore this would place our students at a significant disadvantage ….For example, the SAT and ACT assessments, as well as other standardized tests, will be geared to the CCSS.” This is realpolitik, folks. Yesterday’s gulag is tomorrow’s ghetto. Our children won’t be forced into compliance using the persuasion of a gun; they will be forced into compliance via economic necessity: no government-sanctioned education, no jobs.

The FAQ sheet reassures the concerned that Catholic schools that adopt the standards will continue to control and direct their own curricula. Proof of this, it says, is that:

“Each diocese, in consultation with the members of the local educational community, has decided on an approach to the CCSS that takes into account these local circumstances and the needs of their schools in light of the mission of Catholic schools. […] And because the situation and needs of each diocese is different, so have been the responses to CCSS. Some dioceses have:

However, all that is actually demonstrated is that dioceses are still free to use or not use the standards. Nothing in the above indicates much latitude in “controlling and directing” curricula. It is a fact, however, that “Common Core State Standards allow participating states to adopt an additional 15% of their own standards.” [newmexicocommoncore.org/pages/view/80/15-additional-new-mexico-standards] For a Catholic school, that might be just enough to add a religion class; it is not enough to permeate history and language arts with a Catholic identity.

Furthermore, assessments – which the FAQ has just explained (above) will be increasingly geared toward the national standards and are distinctive enough that a student who has not been taught to them will be decidedly disadvantaged – drive the curricula. To give a relatively benign example, a test that measures rudimentary arithmetic skills requires different knowledge base than a test that measures the ability to demonstrate a process. Where the assessments test for less benign knowledge, the curriculum must follow.

Bishops who permit the Common Core Standards to function in their schools believe they can do so without any contradiction to Church teaching. However, given the vast problem of regulatory conditions – such as anti-discrimination laws protecting the sexual orientation of teachers or government-approved textbooks – already imposed on parochial schools that receive government funding, this optimism seems naïve.

This article, Catholics and the Common Core State Standards: FAQs answered by the United States Conference of Catholic Bishops is a post from The Bellarmine Forum.
https://bellarmineforum.org/catholics-and-the-common-core-state-standards-faqs-answered-by-the-united-states-conference-of-catholic-bishops/
Do not repost the entire article without written permission. Reasonable excerpts may be reposted so long as it is linked to this page.