If Babies Could March, Could Politicians and Journalists Even See Them? 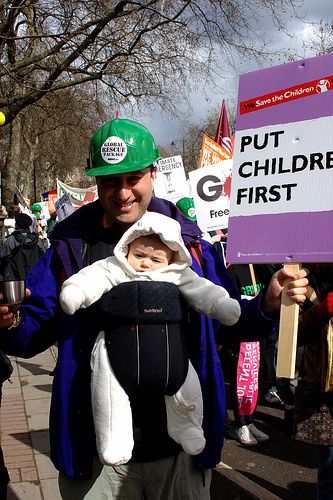 If Babies could march, assemble, and loudly voice their grievances, and there was political and journalistic will to protect their Constitutional[i] and natural right to life and to pursue happiness, then opinions and the law would change to protect those rights.

All civil change comes from some form of a grassroots movement by those who are wronged and subsequently take action. Those with “standing” [ii] before the court of public opinion are heard, supported by some, and eventually effect change. To have “standing,” individuals need four things:

Opinions and laws on abortion do not change because of number four.

Recently, Nancy Pelosi was asked, “Is an unborn baby with a human heart and a human liver a human being…If it’s not a human being, what species is it?” Her response was: “I do not intend to respond to your questions, which have no basis in what public policy is that we do here.” Jews and blacks were treated as property and not humans because of reasoning like hers. Fortunately, that logic failed as applied to them. Most journalists and many politicians continue to share her view and refuse to recognize the violence done to babies, so, the violation of their natural rights continue.   Let’s take a couple of examples of modern movements to show that if journalists and politicians defended babies, then laws and opinions would change.

How loud you yell, and how much destruction you create in furtherance of your cause, is excusable if journalists and politicians support your cause. Take the disparity in treatment in response to two simultaneous movements: Tea Parties verses Occupy Wall Street. The media disparaged Tea Party marchers and the movement, to the point of accusing them of racism. However, even though members of the Occupy Wall Street movement vandalized and committed crimes, the media backed their cause, Nancy Pelosi publicly supported them, and we saw the movement grow because of the positive media attention. Those who oppose killing babies would never get away with doing what Occupy Wall Street did – journalists do not support protecting babies.

Another example is the [so-called] right for homosexuals to “marry”. Several studies show that media changes public opinion. Joe Biden said on Meet the Press that Will and Grace did more to educate people on homosexuality than did anyone else. For the past ten or so years we have seen a progressive movement of positive reporting on the homosexual lifestyle and marriage. Sitcoms, movies, and journalism over the years reported more positively on homosexuality and on homosexual marriage than negatively. Public opinion on homosexuality transformed in support of it, leading to a political movement where President Obama changed his position, to the Supreme Court ruling that all states must recognize homosexual marriage. The media’s ability to change attitudes and minds is powerful, and they hold much of the power on how we view certain issues and causes.

Taking our examples and the model for “standing” above we see that the fourth element is missing when applied to babies. Babies have a cause, however, they cannot personally assemble to have their voices heard. So, like animals and the environment, others must stand before the court of public opinion and express the wrongs done to them. Journalists and liberal politicians, however, don’t agree with the cause and movement so their voices aren’t given weight or endorsed.

Imagine if journalists and the majority of politicians didn’t stand against the socially acceptable movement of the time, like slavery and segregation. Until journalists and liberals take the mantel of advocating for unborn babies, their rights will continue to be abrogated.

[ed. note. As you are aware, today was the March for Life in Washington D.C. Mr. Murphy’s point was hopefully well expressed there today by those who took the cold weather and marched for them. Also recall that we’ve discussed this “Luciferian Conspiracy Against the Truth” before.]

[i] The Supreme Court does not recognize the Constitutional right of life for the unborn. This, however, does not mean there is no Constitutional right. The Supreme Court also ruled that blacks were not American citizens and the Federal Government could not regulate slavery (thus upholding slavery), enraging the anti-slavery movement in the North, especially Republicans (Dred Scott v Sanford, 60 US 393), and it upheld segregation (Plessy v Ferguson, 163 US 537).

[ii] Standing here refers to societal approval that a law causes harm to individuals because it violates a right.

This article, If Babies Could March, Could Politicians and Journalists Even See Them? is a post from The Bellarmine Forum.
https://bellarmineforum.org/if-babies-could-march-could-politicians-and-journalists-even-see-them/
Do not repost the entire article without written permission. Reasonable excerpts may be reposted so long as it is linked to this page.