Is Common Core Unraveling? Or Is It Changing Face? 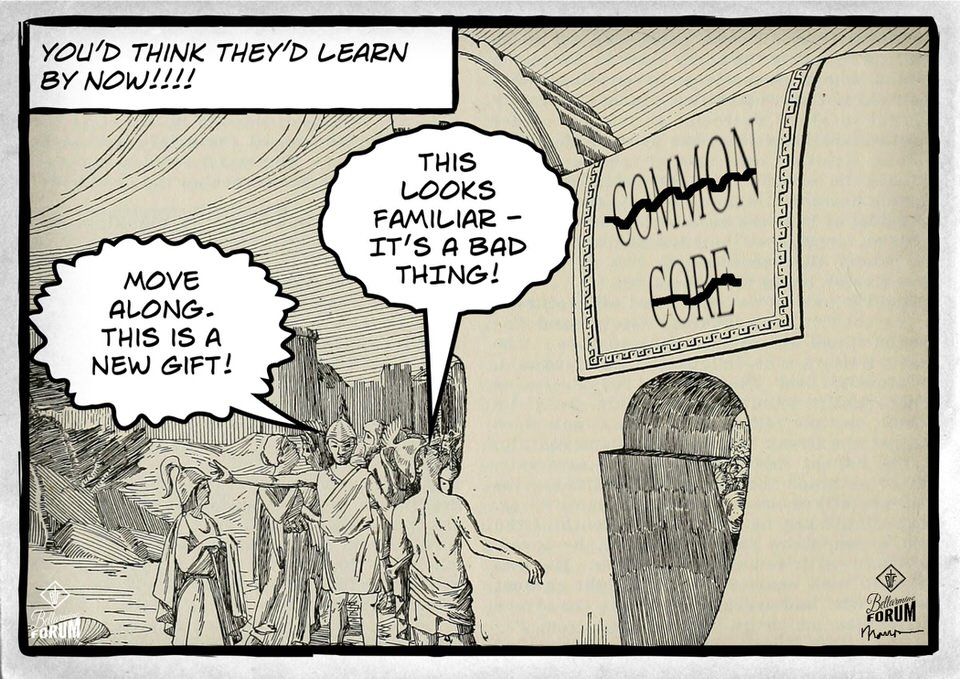 The intrigue surrounding Common Core implementation and all the other scurrilous components of our planned national education/workforce system will make a rollicking story someday.

The Missouri Catholic Conference, to take an example, has supported education bills(1) being sold as “a matter of basic fairness.”  The funds these bills would provide “should be available on a non-discriminatory basis to graduates of both public and nonpublic high schools.”(2)

To legislative and education watchdogs, however, this looks like a way to sneak Common Core into Catholic schools through the backdoor.  Catholic parents who are familiar with Common Core and have opposed it for their children may not recognize that the A+ Program under discussion requires adherence to these same State Standards (Common Core).  Implementation of the A+ Program in Catholic schools accomplishes the educational end they have already rejected.

A+ Program by whose standards?

A group calling itself the Missouri Education Watchdog is concerned that many aspects of this national education system are being snuck through the backdoor, affecting everyone, not just the Catholics.  For instance, it repeats the remarks of Missouri Governor Jay Nixon at the 2013 National Governor’s Association meeting.  He identifies a “coalition of the willing” who are used “on the front end” to put a pilot study in place.   “[T]hen we’ll prove it on the back side on what works….that was our theory.  It was very controversial to get through and the only way to get it through was through this cooperative measure…and rather than fire away at the Legislature.”(3) The legislature can be brought in once there has been a fait accompli.

This devious behavior does nothing to assuage concern about the purposes of a nationalized public education/workforce system.

The Utah Spin (just change the name so People don’t know what it is?)

In Utah, Governor Gary Herbert reversed his longstanding support of Common Core standards and asked the State Board of Education to do likewise.  Concerned, as any politician would be, about its rising level of controversy, he urged the implementation “of uniquely Utah standards, moving beyond the Common Core to a system that is tailored specifically to the needs of our state.”(4)

One may be excused for expressing suspicion.  Like the Missouri A+ Program, is this just another vehicle for ultimately reaching the same, predetermined goal?  Connor Boyack, president of Libertas Institute and the author of several books on politics and religion, writes:

“It is important to note that the Board of Education adopted an experimental set of standards for which there was no evidence. No trials had been done. Nothing had been tested. They rushed the state into its adoption not because of any empirical data, but because its adoption was required in order to qualify for a potential federal grant that, in the end, Utah did not receive. For filthy federal lucre, hundreds of thousands of Utah children were turned into pedagogical guinea pigs.”(5)

While Boyack welcomes the Governor’s newfound concern with the Common Core standards, this time he exhorts the state to actually consult “with the parents and teachers who are impacted by …top-down decisions.”

An article in the Stanford Social Innovation Review, written by a former director of the federal Race to the Top program, is very open about the federal role in developing state acceptance for sweeping education “reform.”(6) She describes how her office manipulated significant changes in state education policies, standards, and involvement in national assessment consortia by offering the states large, competitive grants to be given only to the “worthiest applicants.” Complex criteria for these grants included the creation of a “statewide blueprint for improving education,” so even states that failed to receive grant money became invested in supplanting local control with their own agendas.

So, is Common Core unraveling?

Not a bit.  As tactics of distraction become increasingly sophisticated, the concerned citizen needs to keep his focus on the principle of subsidiarity: in so far as possible, let the unit of society closest to the child remain responsible for educational decisions.  The further we move from that principle, regardless of shifting program names, glossy facilities, and grandiose rhetoric about competing on a world stage, the further we move toward the tyranny of adulterated values – if nothing worse.

This article, Is Common Core Unraveling? Or Is It Changing Face? is a post from The Bellarmine Forum.
https://bellarmineforum.org/is-common-core-unraveling-or-is-it-changing-face/
Do not repost the entire article without written permission. Reasonable excerpts may be reposted so long as it is linked to this page.