Is it Wrong to Judge a Catholic Parish by the Confession Schedule? 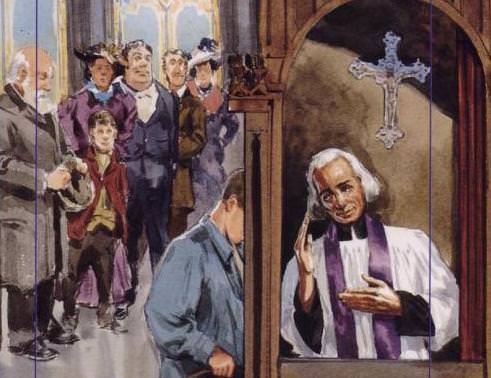 Back in the 90s, I encountered the “penance service” phenomenon whereat people were told to write their sins on a piece of paper and put them into a bowl that would be lit aflame to burn the sins. I never stayed for the finale, and had secretly hoped that the whole place would burn down — felt banners, resurrecifix, and all. I saw another parish where the “confessional” was a glass walled sitting area that looked kind of like a interview seat on the set of a TV daily talk show. Who would want to go to confession there? Everyone would see you through the glass, not to mention that the way it was lit would make you feel as if you were performing on stage…

It was no wonder I never saw anyone using it.

Later, I would encounter Fr. Hardon explain that frequent confession is the cornerstone of spiritual progress. A sigh of relief because he explained that Pope Paul VI, after Vatican II, had noted:

Frequent and reverent recourse to this sacrament, even when only venial sin is in question, is of great value. Frequent confession is not mere ritual repetition, nor is it merely a psychological exercise. Rather is it a constant effort to bring to perfection the grace of our Baptism so that as we carry about in our bodies the death of Jesus Christ who died, the life that Jesus Christ lives may be more and more manifested in us. In such confessions penitents, while indeed confessing venial sins, should be mainly concerned with becoming more deeply conformed to Christ, and more submissive to the voice of the Spirit.

St. John Paul II was similarly disposed, perhaps more strongly so, as I recall him constantly urging frequent confession. So much so, that you wonder how what I’ll describe can exist today…. yet it does.

You have to wonder, though, when you look at modern American parishes. I assembled some examples by comparing very large (1500 or more families) parishes from a variety of cities. Of the many I surveyed, it was strange that nearly all of them made it very difficult to find confession times on the website. Of those I could find, it was almost verbatim:  confessions at 4:30 (or 4) Saturdays, usually a half hour, some for an hour, before the so-called vigil Mass on Saturday evening.

I’ve mentioned “busybodies” before. I’ve mentioned before how AmChurch marginalizes its own and forsakes the inheritors of faith as well… Both Padre Pio and St. John Vianney are known for bringing lost Catholics back to the fold and both heard confessions endlessly…  But they are merely a couple examples.

but seriously…  Is it wrong to see these places as lost? A ten page bulletin for a place that has about 5000 parishioners, with a half hour for confession weekly at which maybe 5-10 people show, has plenty of resources to teach its people on the need for frequent confession, right?

At some point, you’d think some of those 5000 people would pressure the priests to have more confession times. It’s not like they don’t have enough busybodies to do the administrative work at those places.

Is it wrong to see all of this as “activity” that has replaced our faith?

Is it wrong to think that place isn’t “Catholic”?

Does it make it any better that some of these places describe the giant confession services they have during lent, once or twice, during which many priests hear confessions?

This article, Is it Wrong to Judge a Catholic Parish by the Confession Schedule? is a post from The Bellarmine Forum.
https://bellarmineforum.org/is-it-wrong-to-judge-a-catholic-parish-by-the-confession-schedule/
Do not repost the entire article without written permission. Reasonable excerpts may be reposted so long as it is linked to this page.

Tagged as: Busy-bodies, Confession, The Church in the Modern World

Media-Created Hype and the Motu Proprio

BFP: Rest Easy! The Greatest threat to the Church has been Removed!