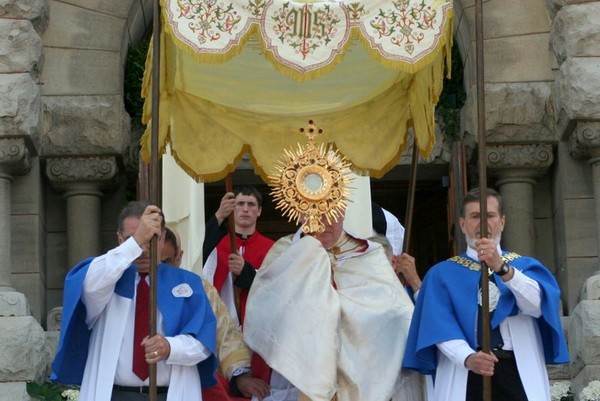 In recent years, there has been a push to make public processions again on Corpus Christi. Thank God!  after all, that’s Our Lord, Living and Present in the Blessed Sacrament!  We should boldly proclaim to the world the good news that Jesus is Risen from the Dead and lives among us!

As we all know, not everyone in the Church believes such a basic premise of Catholic faith these days.

To bolster our hopes and aspiration, and from time to time I like to compare what we have today to the bygones. I recently got my hands on the entire collection of St. Maximillian Kolbe’s writings and I looked up a little gem on Corpus Christi — it was an article Fr. Kolbe wrote in the Magazine of the Immaculata.

On the 19th of this month, factories will be closed. Manual work will be shut down and crowds of believers and many drawn by curiosity, even if not Catholic, will take part in the magnificent annual procession of the Corpus Domini. There will be many beautiful songs, music, and possibly even gun salutes. However, a few drunken fops will be sitting it out, swearing in some dingy restaurant (as it happened in Grodno last year).

Why all that, and to what end?

To what end such pomp as offends Protestants? And why these blasphemies?

It happened in Capernaum, a town by the lake of Gennesaret. The crowds had gathered around Jesus and, among other things, he said to them: “I am the living bread that came down from heaven; whoever eats this bread will live forever; and the bread that I will give is my flesh for the life of the world.”  When the Jews, who had understood the words of the Savior literally, asked: “How can this man give us his flesh to eat?,” Christ solemnly underlined the literal meaning of his words: “Amen, amen, I say to you, unless you eat the flesh of the Son of Man and drink his blood, you do not have life within you. Whoever eats my flesh and drinks my blood has eternal life and I will raise him on the last day. For my flesh is true food and my blood is true drink. Whoever eats my flesh and drinks my blood remains in me and I in him. Just as the living Father sent me and I have life because of the Father, so also the one who feeds on me will have life because of me. This is the bread that came down from heaven. Unlike your ancestors who ate and still died, whoever eats this bread will live forever.”

St. John the Apostle heard his promise of the Savior with his own ears and wrote it down in his Gospel (Jn 6:51-59).

Six months later, in the Upper Room at Jerusalem, the apostles gathered around the Savior to eat the paschal lamb. That was the Last Supper, the time ofseparation, in which the Savior had decided to fulfill the promise made half a year before. “While they were eating,” St. Matthew, who was present, recalls, “Jesus took bread, said the blessing, broke it, and giving it to his disciples said, ‘Take and eat; this is my body.’ Then he took a cup, gave thanks, and gave it to them, saying: ‘Drink from it, all of you, for this is my blood of the new covenant, which will be shed on behalf of many for the forgiveness of sins'” (Mt 26:26-28). And he added, as attested by St. Luke (Lk 22:19) and St Paul (1 Cor 11:24-25):  “Do this in memory of me.”

And from that moment the sacrifice of Holy Mass dwelt on the earth. More and more often, in ever more distant lands. Initially, in the crypts of catacombs, and then in an increasing number of churches. And on June 19 the priest, the successor of the Apostles, in obedience to the command of the Man-God, will repeat in His memory the touching scene of the Last Supper. The bread will become the living Body of Christ and the wine His most Holy Blood.

And He, the Creator of heaven and earth and the Redeemer of souls, will come out to the streets and the roads of His children, carried by the hands of the priest.

How could pomp be deemed excessive on such occasion? Would such pomp if anything be worthy at all of such a Lord??…

Old Simeon, holding the long-awaited Messiah in his arms, had prophesied: “Behold, this child is destined for the fall… of many in Israel, and to be a sign that will be contradicted” [Lk 2:34], and those men blaspheme… poor things… they are blind… Let us warmly commend them to the Immaculata.

Nevermind that half of modern American Catholics would complain about such a display being violent and blah blah blah….  That’s freaking awesome!

We need this again…  We need parts of our cities where the public processions and the life of Catholics are interesting enough that onlookers would drink and watch. Yes, even if they become “drunken fops”

Felt Banners don’t do it. They aren’t the Living God, for one thing.

What is your parish like? Did you have a procession today? Tell me!   I like the stories and I want some edification that we have this practice alive today!

This article, Is Corpus Christi Interesting Enough to Draw Drunken Fops and Gun Salutes? is a post from The Bellarmine Forum.
https://bellarmineforum.org/is-corpus-christi-interesting-enough-to-draw-drunken-fops-and-gun-salutes/
Do not repost the entire article without written permission. Reasonable excerpts may be reposted so long as it is linked to this page.