From the Mail: How can a Vow be voluntary if Abraham Forced His servant to make one?

Bruno B. wrote in with a question about an entry on the Bellarmine Forum catechism in which a vow is explained as:

“1. A vow is a promise voluntarily made to God, to perform some good action.

The vow is a promise made to God. We call upon God implicitly, if not explicitly when we say: My God, I promise that I will do this or that. A simple intention is not a vow; no one, not even God Him self, can require anything of us because of it. A vow is a promise made of our own free will: no one is bound to make it (Deut. xxiii. 22), and no one can be compelled to make it. A vow made under compulsion is invalid; not so one made under apprehension of danger, or stress of want, for then the act is voluntary.”

Bruno picked up on the part that it must be 1) voluntary and 2) not compelled.

So he then asks about this passage in Genesius 24 wherein Abraham tells his servant to make a vow:

“So now I have this conflicting doubt. In Genesis 24 “And Abraham said unto his eldest servant of his house, that ruled over all that he had, Put, I pray thee, thy hand under my thigh: 3 And I will make thee swear by the Lord, the God of heaven, and the God of the earth, that thou shalt not take a wife unto my son of the daughters of the Canaanites, among whom I dwell”

Bruno read that and exclaimed:  “Abraham compelled his servant to make a vow to God.”  and this “causes [him] conflict because it was forced.”

Bruno’s question is a great one because there are many things going on in that Abraham passage. At the heart of it, though…

Did Abraham force his servant to make a promise to God?

If so, would the vow then be void because it was compelled?

The rest of the exchange between Abraham and his servant make it clear that the servant asked questions and got things straight before he made the promise. That indicates that Abraham did not force or compel the servant, but the servant was bargaining the terms and limitations.

If the servant Eliezer was not free to deny the vow, then he would not have been free to argue with Abraham.

I consulted Chrysostom’s Homily on Genesis, no. 48 for this answer. I also found a great note on Catholic Culture from Fr. William Most. Fr. Most summarizes the exchange this way:

“CHAPTER 24: A wife for Isaac: When Abraham was old he called the oldest servant he had, Eliezer (cf. 15.2) and told him to put his hand under his thigh to take an oath. (thigh was a euphemism for genitalia, as the source of life). Abraham then ordered him to go out of Canaan to the land of his kin and find a wife for Isaac. If the woman was unwilling to come, the servant was free of the oath. But Abraham promised God would send an angel with him. Isaac must not return to the land from which God had ordered Abraham to leave years before.”

In other words, the servant was asking Abraham if the oath meant he must take someone else against their will (kidnap), AND he was trying to figure out if the vow was possible to be completed. Abraham agreed and limited the conditions of the promise.

The restated promise is simple:  don’t get a wife from Canaanites, and if you can’t find a woman to come voluntarily, you’re off the hook.

Based on those conditions, the servant obliged, that is, he agreed to promise to God that he would do that.

Abraham clarified the limits of the promise. He made it clear what the servant was to avoid, and how the promise would be completed.

So, the concern from Abraham was for the servant to promise (with God as a witness) that he would not cheat and grab a Canaanite, and that he would not take Isaac there. The servant agreed, because it was also made clear that if he could not find a woman where Abraham asked him to go, then the obligations of the promise dissolves.

The servant could complete that task, so he agreed and made the vow.

St. John Chrysostom adds so much to this exchange. He points out that Abraham is trying to tell the servant to trust in God’s help (because God made a vow to Abraham). 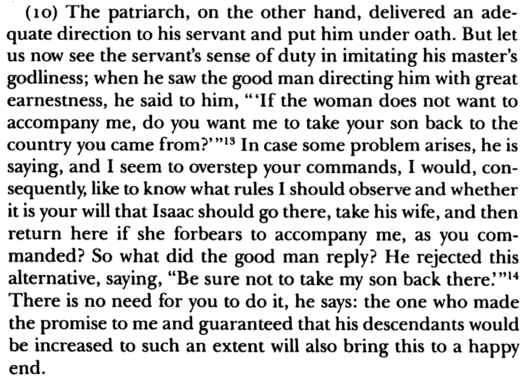 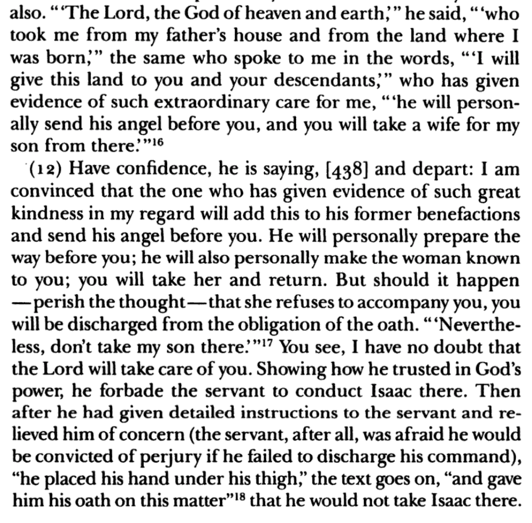 I think that answers the conundrum. But, I posted this answer because I never really paid attention to what St. John Chrysostom said. It’s actually a cool little story about Abraham’s trust in God’s promise made to him. It makes me wonder if I am that steadfast in God’s help.

What do you think? Did Eliezer make a voluntary promise? Was the vow he made to Abraham valid?

At the end of the day, he snags Rebekah from the well and she marries Isaac, so it all worked out. 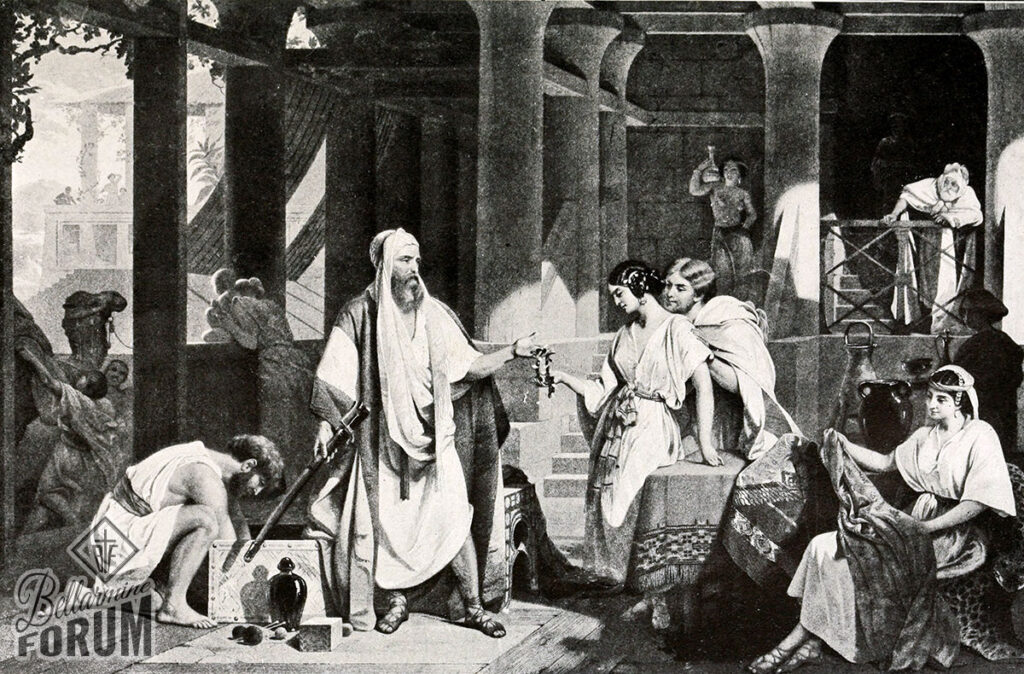 This article, From the Mail: How can a Vow be voluntary if Abraham Forced His servant to make one? is a post from The Bellarmine Forum.
https://bellarmineforum.org/mail-can-vow-voluntary-abraham-forced-servant-make-one/
Do not repost the entire article without written permission. Reasonable excerpts may be reposted so long as it is linked to this page.

Tagged as: from the mail