Numbstruck over Fatima: If you are blaming the Pope, you’re doing it wrong

Yesterday was First Saturday and the Feast of the Transfiguration. I tend to have a post on First Saturday, and I missed it yesterday, but it gave me a chance to consider something. Things are awful today — in the Church and without. Just look at politics and the shenanigans of the candidates. Worse, look at the inane things people are saying about the candidates! But, people bring this back to blaming the Pope for allegedly failing to consecrate Russia. What a cop out! I’ll explain:

Like the Disciples on Mt. Tabor, We Need to be Struck Dumb by a Sliver of Glory

Traditional Icon of the Trasnfuguration shows the Glory of Jesus striking the Apostles — notice that they appear to be dumbstruck!

I love the events at the Transfiguration — in the Eastern Churches, the Troparion for the day says, “When you were transfigured on Mt. Tabor, Christ our God, you showed your disciples as much of your glory as they could hold…”  Only St. Peter was able to speak and he said something kind of dumb, “this is great, let’s make some tents.”  He was awestruck. And that wasn’t even all of Our Lord’s glory.

Moses saw but the backside of Our Lord and he was forever changed, even had to hide his face lest people become struck dumb in the reflection of God’s glory.

When the Angel appeared to the children at Fatima, they too were awestruck. Only on the second visit could they speak to him. They were struck for hours after his visit, not really even able to function

What about us? I think we have become numbstruck…  struck numb instead of dumb. The sad attendance at First Saturday proves that people are sleepy and numb. I say that because you never hear about making reparation. Also, I say it because you can’t even find Marian devotion in many Catholic churches. I’ve seen it for years. Some old people, foreigners (as in Europeans), and some families. A sad showing overall. Latin Mass groups tend to have higher attendance, but even theirs is a weak show. 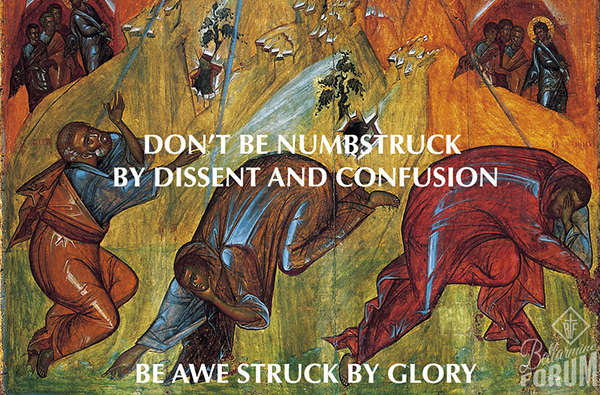 The Apostles depicted at Transfiguration

Who is to blame, though? The bishops? The priests? The lazy pew sitter? Who?

Many people, at least if you listen to current discussion of Fatima, blame the Pope. I think that’s a demonic charade. And I’ll go even further to say that those who insist on turning Fatima into a carnival show of conspiracy talk about whether:

(all of those, except the aliens, can be found readily by googling fatima – I don’t want to link to them).

It’s baloney. Worse, all of those things make Fatima about something different than what the Blessed Mother intended and came to tell us.

The Demonic Distractions from the Peanut Gallery of Fr. Gruner, Medjugorje, and other Charismaniac sources

I’ve commented before about the late Fr. Gruner and his crew. I’ve also commented on Medjugorje, whose so-called purported messages are but counterfeit coins, in my opinion. I’ve also repeated Fr. Hardon and bolstered with my own opinion, that the so-called charismatic movement is a counterfeit coin as well. I know that these are all wildly hot topics that draw the nastiest of fights. Actually, I think that says a lot. I think we can take that as evidence in itself of bad, but generally, each group has contributed:

If you listen to people who follow Fr. Gruner:  the Pope is causing us harm and he is wrong – and nearly every single discussion from that group degenerates into one or more of the topics above;

Why would I call them demonic distractions? It behooves the plan of the devil if he can cause as many people to be away from what Our Blessed Mother asks. She leads us to life in Heaven with her Beloved Son, Jesus, and the Holy Trinity. If he can distract people from her and into bitter disputes, loud yelling matches, suspicions of motives, and chaos instead, he will. So why did I implicate those groups above? Substantive discussions about Fatima are quickly subsumed and Fatima, however, is obscured behind questioned motives, fights, suspicions of dastardly acts, and subterfuge of the Blessed Mother. Sometimes they accuse the Pope himself of thwarting Heaven and the Blessed Mother.

I’m not an expert. Look, I will be the first to admit that whether the consecration was valid, whether this or that, or whether the various Holy Fathers have done what was asked of them is beyond my competence. I have opinions on these things, but I’ll be the first to admit that I don’t have enough information…  I haven’t seen anyone besides the Blessed Mother and Our Lord who could adjudge those things — but people will argue all day long about it! They do that instead of what they ought… 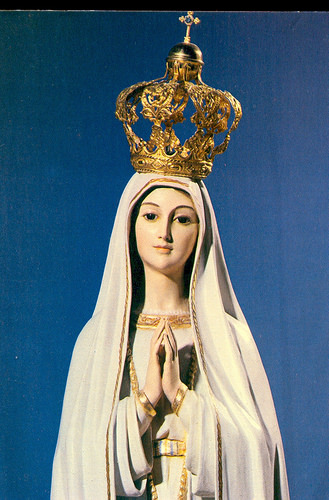 I can, however, listen to the message of Fatima and realize that I was given something to do. The more time I spend worried about what the Pope did or didn’t do, is time away from understanding what the Blessed Mother told me to do:

After all, the Blessed Mother gave us the conclusion, “In the end, my Immaculate Heart will triumph.”

If you think that Communion in the hand, fights about facing ad orientem while ignoring that we should not be using extraordinary ministers, or wreckovations are doing well…

Worse, if you think that abandoning the lost souls of the Church and replacing the empty pews with Mexican and South American immigrants is the future of the Church, then you’re doing it wrong. Those souls lost from our pews left because of the Judases in the Church and because people have abandoned Marian devotion. They make fun of it in fact. Outrage!

This Hell on Earth Has Nothing to Do with Consecrating Russia, but With a Numb Indifference to Fatima

And none of this has to do with the Pope and the consecration of Russia.  Rather, It has to do with the fight in the Church, predicted by Leo XIII (Satan making progress), Pius X (modernists within the Church hide themselves), Paul VI (smoke of Satan in the Church) and others:  there are people in the Church that have lost their faith in God…  Some of these are even Bishops and Cardinals. Akita, the revelation of the third secret itself, told us this: bishop against bishop, cardinal against cardinal. Akita also pegged Communion in the hand as outrage.

When our Lady appeared at LaSalette, she said France would be harshly punished because people worked on Sunday, and the mule drivers took Our Lord’s name in vain. Today, we have worse by multiples and all over the place, even in the Church. And yet, people are indifferent to it…

But, like communion in the hand, and extraordinary ministers, it gets shrugged off as unimportant. Numb. We’ve grown numb.  Some of us, who see the outrage of these things and don’t want to sleep next to the filth, can shake our fists and exclaim, “If our bishops were concerned with doing what God asked, and not so concerned with glazing these things over with a hypnotic ‘pastoral concern’ of numbness…” but it comes back to us, though.

I say us because of what Our Lady asked the children: “Are you willing to offer yourselves to God and to bear all the sufferings He wills to send you, as an act of reparation for the sins by which He is offended, and of supplication for the conversion of sinners?”

The Problem and Remedy is People, even Dripping with Holy Water and Reeking of Incense Do not Adore, Love, and Believe in God

The angel that appeared to the children gave us the exact problem and the remedy with his first visit:

He knelt, bending his forehead to the ground and said, “My God, I believe, I adore, I hope, and I love You. I ask forgiveness for those who do not believe, nor adore, nor hope, nor love You.”

Some of those people, who do not love and believe in God even go to Mass, as Fr. Hardon said in his diagnosis of neopaganism.

Our Blessed Mother added to pray the Rosary every day, and honor the First Saturday devotion.

Given the shoddy attendance at First Saturday, I’d say we aren’t anywhere near The Triumph of the Immaculate Heart, and it’s not the Pope’s fault, either.

This article, Numbstruck over Fatima: If you are blaming the Pope, you’re doing it wrong is a post from The Bellarmine Forum.
https://bellarmineforum.org/numbstruck-fatima-blaming-pope-youre-wrong/
Do not repost the entire article without written permission. Reasonable excerpts may be reposted so long as it is linked to this page.