Recently, there was a bunch of hooey because Facebook founder Mark Zuckerberg said he thought Facebook groups could replace church for many people. I think he’s right.

Unfortunately, I take the opposite stance that the Federalist took. They said Mark Zuckerberg doesn’t understand church. They explain that Facebook cannot replace church. See, Mark Zuckerberg Is Clueless About Church If He Thinks Facebook Can Replicate It.

Zuckerberg’s true purpose is to use artificial intelligence to get people organized into groups. CNBC reported that at least. Zuckerberg has given a great secular humanist reason for his altruism. He said, “People who go to church are more likely to volunteer and give to charity — not just because they’re religious, but because they’re part of a community.”

That’s our real clue here. That sentence tells us how he sees religion. The problem he’s trying to cure is that he thinks we all need a group to give us purpose. And he says people are leaving groups, “It’s so striking that for decades, membership in all kinds of groups has declined as much as one-quarter… That’s a lot of people who now need to find a sense of purpose and support somewhere else.”

Federalist Editorial is Worth Reading, but they miss the Point

The Federalist report above cites Donna Freitas. Frietas is a Non-Residential Research Associate at the University of Notre Dame’s Center for the Study of Religion. She said to the Federalist:

“After spending two years interviewing college students all over the country for my national study on social media and young adults, (published as “The Happiness Effect” at Oxford University Press), I would say that very few students seek community—the kind you might find at church—on social media.”

This leads the Federalist to state reasons why Facebook church will fail. Among these reasons are that college students increasingly resent facebook manipulating them.

Let me say for the record that I agree with what the Federalist says. I also think that article worth reading. There is great stuff there.

With that said, let me now say that I am shocked they missed the obvious. For as much as the words church and religion appear, they fail to see how the word religion is taught and defined today.

I’ve cited Fr. Hardon’s definition of religion before. I want to point out that religion years ago had to do with a conviction to practice and worship God as He revealed Himself to us.

Religion Means Worshipping God, The Triune God, that is

Here is the actual definition from the Modern Catholic Dictionary:

RELIGION. The moral virtue by which a person is disposed to render to God the worship and service he desrves. It is sometimes identified with the virtue of justice toward God, whose rights are rooted in his complete dominion over all creation. Religion is also a composite of all the virtues that arise from a human being’s relationship to God as the author of his or her being…

Get that definition? It is immediate. Religion has to do with God’s revelation. God is the Holy Trinity revealed to us at the Baptism in the Jordan, by the way. We aren’t talking in vague modern inclusive terms.

Now look at how religion is defined today:

At first blush, it seems acceptable. The devil, as they say, is in the details. And John Dewey is the devil’s scribe in this case.

Some might say that this is merely an expression of worldwide religion and not focused on Christianity. That’s not the point, though. The third definition reveals what John Dewey did to the concept of religion.

John Dewey was an atheist. He says God does not exist except as the projection by our imagination of those non-objective ideals which guide our human conduct. For Dewey, the idea of God is not real. He says it is created by the fantasy. But he also says it is not illusory because it serves the purpose of idealizing our hopes and desires. Here is Dewey’s explanation in his own words:

“The idea that “God” represents a unification of ideal values that is essentially imaginative in origin when the imagination supervenes in conduct, is attended with verbal difficulties, owing to our frequent use of the word “imagination” to denote fantasy and doubtful reality. But the reality of ideal ends as ideals is vouched for by their undeniable power in action. An idea is not an illusion because imagination is the organ through which it is apprehended.”

Now, get that point… when Dewey says “God”, he means some idea of the imagination.

Do you see how #1 and #3 are identical? If “god” is an idea that moves us to undeniable power of action, then the “Superhuman controlling power” is just an idea. As an idea, it is something someone “ascribes supreme importance” and nothing more.

It did not became Man. It did not die on Cross for us.

In fact, it doesn’t exist. Does that modern definition seem acceptable anymore? Kind of misses the whole point of God, doesn’t it?

Dewey Hated Religion and Made it into an “important motive”

Fr. Hardon describes this better than me, so I’m going to quote him:

Dewey inveighs against the idea of religion — any religion — which pretends to represent man’s relations with an objective and personal Deity. He introduces a distinction between religion and religious which has since become famous. Projected ideals of conduct are religious, but there is no warrant for religion, since there is no extra-mental God for religion to worship. “Any activity,” according to him, “pursued in behalf of an ideal end against obstacles and in spite of threats of personal loss because of conviction of its general and enduring value is religious in quality.”

Check that out. Remember definition #3 above? That’s what most people today think religion is!

I am giving a very short shrift to Dewey. Suffice to say that he rails worse than Marx.

John Dewey wrote a humanist manifesto. It has ten or so points that define humanist beliefs. I’ll quote the relevant ones here:

(6) In the place of the old attitudes involved in worship and prayer, the humanist finds his religious emotions expressed in the heightened sense of personal life and in a co-operative effort to promote social well-being.

(7) The humanists are firmly convinced that existing acquisitive and profit-motivated society has shown itself to be inadequate…. A socialized and co-operative economic order must be established.

(8) Though we consider the religious forms and ideas of our fathers no longer adequate, the quest for the good life is still the central task for mankind. Man is at last becoming aware that he alone is responsible for the realization of the world of his dreams, that he has within himself(*) the power of its achievement.

Go back up there and read Zuckerberg. It’s John Dewey!!! It’s the humanist manifesto!!!

Church to these people is human organization to help them follow whatever their personal “supreme importance is”. In other words, it is finding people with similar concepts of importance.

Zuckerberg is pragmatically applying Dewey and the humanist manifesto. It’s not new or novel. It is exactly what the modern dictionary tells us.

They Communicate Using Our Own Words! Zuckerberg means to Replace traditional Churches… Seriously.

The point I want you to see by all this is that humanists use the same words as us. They don’t mean what we think they mean, though.

That’s why I say that the Federalist conclusion was not on point. Their conclusion tries to say Zuckerberg doesn’t understand how real churches work. They say:

On the other hand, doctrinally rich churches (and synagogues) find their membership rolls growing. Well-versed in their religious traditions, these faith-filled individuals would never seek refuge in the Facebook community because the cult of the individual can never replace the community of the divine. Father David Palmer beautifully explained just that point—and more—in his response in the Catholic Herald to Zuckerberg’s comments.

Then, Miss Cleveland (author of the Federalist piece) cites Father’s very nice explanation of how true religion fulfills human needs. It is a great quote.

The problem is, read that humanist manisfesto in light of Dewey’s beliefs. Zuckerberg believes he is doing the same thing. Zuckerberg is fulfilling Dewey’s explanation of human desires.

We Know Facebook cannot replace the Sacraments, but it can be Dewey “Church”

So that’s how I say Zuckerberg is right. In humanist-John-Dewey terms, he really is going to make churches on Facebook.

The problem is that a great part of society, under Dewey’s spell, will call it church and nod their heads. They’ve been hypnotized into seeing the words religion and church as Dewey defined them.

As much as I like Cleveland’s complaint and editorial on the Federalist, it only speaks to people who use “religion” and “church” in the sense that we do.

If we are going to battle, and win, then we need to understand the field on which we fight.

Can Facebook replace the one, holy, catholic, and apostolic Church? No. But he doesn’t intend to. They already did linguistically by redefining the very words we use.

He intends to make the humanist church.

And he can, especially if we don’t understand what he’s saying when he says it. 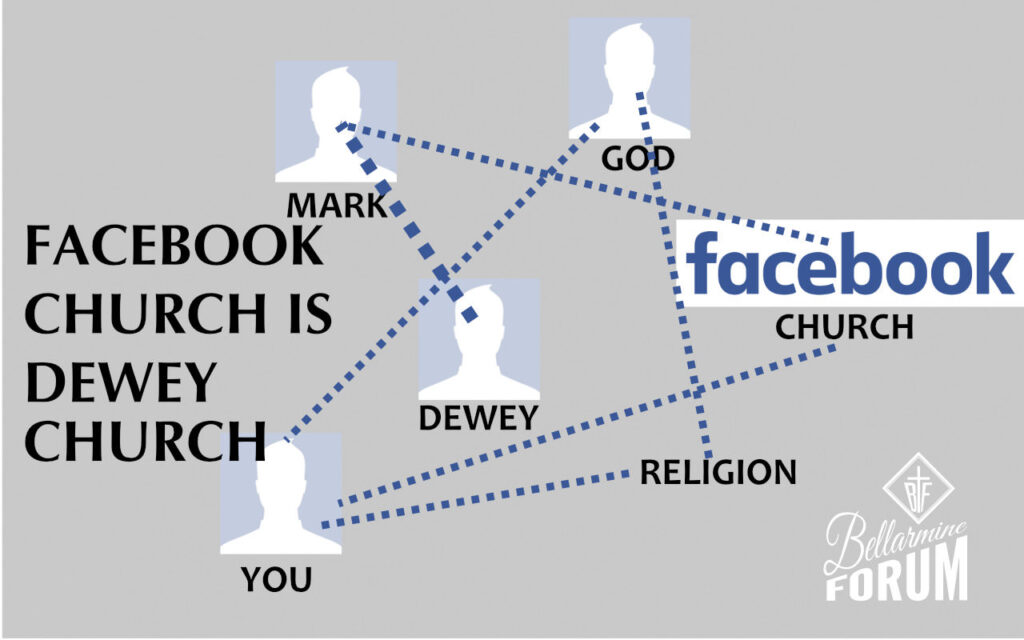 This article, Zuckerberg’s Facebook Church is Real … Don’t Misunderstand him is a post from The Bellarmine Forum.
https://bellarmineforum.org/pope-benedict-predicted-facebook-church/
Do not repost the entire article without written permission. Reasonable excerpts may be reposted so long as it is linked to this page.