Pope Continues to Teach against Authoritarianism

Thanks be to God for Pope Francis! I continue to enjoy his homilies and he often has articulations of concepts that have irked me for a while. He said in his homily today (asianews.it): 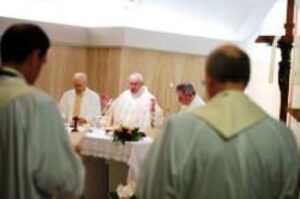 For too long I’ve been irritated about the “party line.”  There was no party line among Catholics when I was growing up. This concept is what Fulton Sheen warned against years ago — Catholics do not identify as conforming themselves to a party line. That is authoritarianism. I reported more on the idea in the unpacking of Pope Francis’s interview posted here. Essentially, he is developing the theme further in his homily today.

It is strange that when I wrote the post “What Really Killied the Church in America,” I spoke to the value of ethnic traditions in preserving authentic Catholic faith, and a vibrant practice of the religion and orthopraxis. Just as I lamented there, biologists and scientists refer to the concept of monocultures that weaken and eventually kill.

Pope Francis is obviously (ahem) reading our stuff! As he says today:

“The globalizing conformity of all nations is not good, its better to be united but each with their own customs”. Those who negotiate their fidelity to the Lord , moved by the spirit of the world negotiate their own identity, belonging to a people, a people that God loves dearly and desires to be His people .

So it is in the Church, unless you are in America. Liturgy in America has been ultra-homogenized and ultra-pastuerized into a bland broth of what might have once been. It’s the same everywhere you go, too. You won’t hear Gregorian chant, but you will hear some sappy folksy hippy psalm response that can smack of self-deification (gnosticism). You will likely see a side show carnival of busybody lay people. If you recognize the tune of any hymns, the words have been sanitized so as to remove any concept of a real living God.

And you are expected to like it (tow the line). That’s the typical American parish these days.

Fortunately, there are some enclaves (for now, but those are being undermined, too).

This idea of towing the line and being homogenized into major similar groups isn’t limited to the liturgy, but it seems to be happening to individuals, too. DeJak once referred to “professional Catholics.”  There’s a line of professional expectations, too — group think — homogeny.

There are some traditional hegemonies in the Church — I explained one of them in my article on the traditional prominence of the Sign of the Cross. Good luck finding that in the pasteurized bland expression of Catholicism. But, whether to eat kielbasa, egg, or ham first from the Easter basket of blessed food is a matter of titanic debate (as it ought to be). It’s scary that there is little to no reaction to the sign of the Cross article, though. It’s almost as if everyone has given in to the homogenization.

I think the pressure to tow the line goes right into the practice of faith and fundamental concepts of liberty in the person. Years ago, I used some specialized software I have that analyzes word usage and concordance to look at how different Catholic groups explain vocation discernment. Traditional groups, and religious orders with long in the tooth tradition had results I expected. Words like “choice, calling, decision, explore” were prominent in their discussions. These results made sense particular in light of Western Spirituality, as most perfectly expressed in the Spiritual Exercises of St. Ignatius tell us that God gives us perfect liberty, and his rules (methods) of choosing a way of life come to us as a choice we a free to make.

Those words seem to imply by the deference they give to the individual, that there’s a number of ways to do this.

Today, there is some new language entering. What became striking to me was to look at newer groups. Most striking was to look at the Legion of Christ. The word analysis of their expressions of vocation revealed new concepts — the strangest of which were “direction, told, and movement.”  That’s obviously different. Told? Think of that for a minute! The idea of being told and directed is not akin to having choice and exploring. It makes me wonder if the individual, not just groups as the Pope is discussing today, feels pressure to hegemonic uniformity. The Legion of Christ wasn’t the only group to have such language changes — numerous charismatic groups were similar.

It seems that Pope Francis is onto something with this exploration of his into all the ways the person is pressured by authoritarianism today. You have to wonder, though, does it matter from where the authoritarianism comes? Is it better when it is flavored with conservative trappings or with liberal?

There is a question begged by the acceptance of authoritarianism, though:

Are people today afraid of choice?

Do they think they can avoid responsibility for their choices by “Doing what they are told”?

What’s at the bottom of this authoritarian spread — is it the spirit of the world, as Pope Francis observes? or cowardice and laziness?

This article, Pope Continues to Teach against Authoritarianism is a post from The Bellarmine Forum.
https://bellarmineforum.org/pope-continues-to-teach-against-authoritarianism/
Do not repost the entire article without written permission. Reasonable excerpts may be reposted so long as it is linked to this page.