What follows is an excerpt from our Slaying the “Spirit” of Vatican II With the Light of Truth. Fr. Sauppé recounts the experience as a seminarian years ago

The Church in the Modern World As I Lived It

Note: In the Fall of 2012, then Pope Benedict XVI, now Pop Emeritus, called for a “Year of Faith.” He also asked pastors and faithful Catholics to celebrate the fiftieth anniversary of the Second Vatican Ecumenical Council and the twentieth anniversary of the Catechism the Catholic Church. Since many have undertaken to compile a narrative of the post-Vatican II Church in the Modern World, I too wish to offer my own eyewitness reflections.

“Foundations, Once Destroyed, What Can the Just Do?”

His words, after twenty years of priesthood, still haunt me to this day: “You should never be a priest!” Coming from my pastoral studies professor at the Catholic University of America (CUA) in Washington, D.C., I knew exactly what he meant, for he said the words with such depth and conviction. Sitting face to face at the teacher/student review session at the end of the first of two semesters, I knew exactly what he meant: “You should never be a priest” meant that I should not be a priest in the post-Vatican II Church – or at least, his post-Vatican II Church.

After Vatican II, from Pastoral Care to “Healing the Psyche” 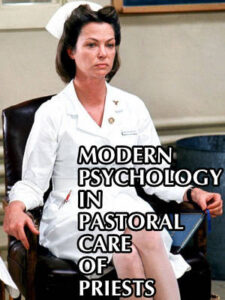 I knew, because after Vatican II, the pastoral emphasis had shifted. Before Vatican II, pastoral care dealt with one’s soul; after, the focus became healing the psyche. Though the Vatican II documents describe the priest as being a “pastor of souls,” many priests were trained instead to be amateur psychologists. This happened because the Council document challenged the Church to update using the most modern sciences. While this effort to update was and is praiseworthy, in many pastoral ministry programs, it was done regardless of its effectiveness and regardless of the base philosophical and anthropological assumptions of those who developed these various methods. I was prepared for his assertion that I should not become a priest, because I had read both Psychologic Seduction  by William Kilpatrick and Dr. Paul Vitz’s Psychology as Religion The Cult of Self-Worship.  These men warned about the abuse of modern psychology in religious life. They critiqued the base anthropological assumptions of these systems and found that they held to a denial of Original Sin, and thus, the lack of the need for grace and, of course, God. At best, modern psychologists often held agnostic, if not atheistic viewpoints.

I also knew what he meant because CUA (a university under the U.S. Bishops’ own authority), allowed Fr. Charles Curran to teach his heretical system of morality, Proportionalism, to men who would become future priests. Proportionalism is a system of moral thought in which one could evaluate all the moral choices and “weigh” the proportion of the good effects over the alternatives of the evil effects. Thus an evil act could be justified morally, if the good effect is proportionally greater than the evil which in turn, would violate the long standing moral principle that one could never do an evil for a good. Fr. Curran taught class after class of seminarians and the CUA Theology Department was full of others who taught Proportionalism as well until Pope John Paul II finally removed Fr. Curran’s Pontifical License to teach in 1986. Thus, when I was at CUA, there was plenty of ill will toward anyone who was orthodox  on that campus.

Learning to Keep Your Mouth Shut

When I think about those words and that time, I have to remind myself of what the professor told us on the first day of class. During a round-robin introduction of the small class with each other, he told us that he was a former Lutheran pastor, and he was divorced and remarried. He told us that the other professors in the theology department did not have a problem with him teaching pastoral ministry to Catholic seminarians and priests. Then he asked us if we had a problem with him teaching; and I exclaimed, “Why yes; yes I do!” Of course, I said this to myself. It took me five years of studies to learn to keep silent in the face of heterodoxy.  And I tried; I really did try to keep mum in his class, but not enough, for he went on during the review session to threaten to flunk me in the second semester.

In this CUA professor’s mind, I was all wrong for the modern Church, and as one of many gatekeepers of the post-Vatican II Church, he had me by the proverbial “short hairs.” But then I told him flunking me might happen, for I was under obedience from my religious superiors to take his class. In an instant, smugness went to open mouth bewilderment. I never did take that second semester. In fact, after graduating from the Dominican House of Studies that May of 1989, I left the Discalced Carmelite Friars, the religious order that I had joined in 1982, and became a layman.

AIDS and the Homosexual Lifestyle

While the above incident did contribute to my decision to leave, it was minor compared to having two senior members of the Order dying of AIDS, and after learning that our house prior/superior was saying Dignity Masses.

What became known as AIDS in the mid-to-late 1980s was brand new to us students and we were questioning both the health risks and the homosexual “lifestyle.” The house superiors felt we needed a workshop to cover our concerns and so they contacted St. Luke’s Institute in Silver Spring, Maryland, an institute with specialists in the treatment of priests, and religious men and women with sexual and mental disorders. On the eve before our Saturday workshop we were told it was canceled; the presenter, Fr. Peterson, could not make it. It was not long after this, that the news came out that the founder of St. Luke’s Institute, Fr. Peterson, had AIDS and died in April of 1987.

In 1981, the Vatican had asked for a formal review of all seminaries throughout the world. For the purpose of integrity, national seminaries would be investigated by an outside Episcopal investigator – someone from outside the country being reviewed. This happened everywhere, except in the U.S. The U.S. Bishops protested at being investigated by an outsider.  And so, the Vatican named Bishop John Marshall of Burlington, VT., as an Apostolic Visitator, and he and other U.S. bishops became involved in the formal investigation. The official visits would entail talking with us seminarians in private, as well as the seminary staff.

Told to Keep your Mouth Shut

By the time the Marshall Review Board came to our seminary, it was 1987, and it was after the above events in the seminary. We were told that the Bishop interviewer would keep everything private, everything confidential. About a week after his visit, the Order’s Provincial flew in to D.C. for a special house meeting. He announced, both to the senior religiously professed members and to the students, that he had been contacted by a particular Bishop Visitator who said our Washington community was in trouble. Our Provincial then put us under obedience not to speak of any of this to anyone; not even to those members of the Order outside of the house in Washington, D.C. If I were to pinpoint the time where I would have made my decision to leave, it would have been at this meeting. Those years were my first up close experience to the Church in the Modern World.

The Good Guys Got Pushed Out

As a layman, I then continued my studies at the Pope John Paul II Institute for Studies on Marriage and Family.  After two years, I obtained a Pontifical License in Sacred Theology in 1991, after which, I came to the Diocese of Peoria, IL and was ordained in Rock Island, IL, in 1992. I taught for three years in one of our Catholic High Schools, and for the next seventeen years, I have been a pastor. While everyone will have a different experience of the joys, hopes, grief, and anxieties of the post-Vatican II modern Church, what I experienced was the unfortunate norm for any seminarian or priest who was orthodox and faithful to the Magisterium of the Church. A Discalced Carmelite Brother described to me the era before Vatican II as being like Nazi Germany to him; well, my experience of the post-Conciliar Church, up until then, was like Dresden.

There’s much more in the book. To order Slaying the “Spirit” of Vatican II With the Light of Truth, visit the order form on our website or use this affiliate link to Amazon and order from us there:

This article, Seminary Life in the 80’s: Fr. Sauppé’s Experience with CUA, Charles Curran, St. Luke’s is a post from The Bellarmine Forum.
https://bellarmineforum.org/seminary-life-in-the-80s-fr-sauppes-experience-with-cua-charles-curran-st-lukes/
Do not repost the entire article without written permission. Reasonable excerpts may be reposted so long as it is linked to this page.