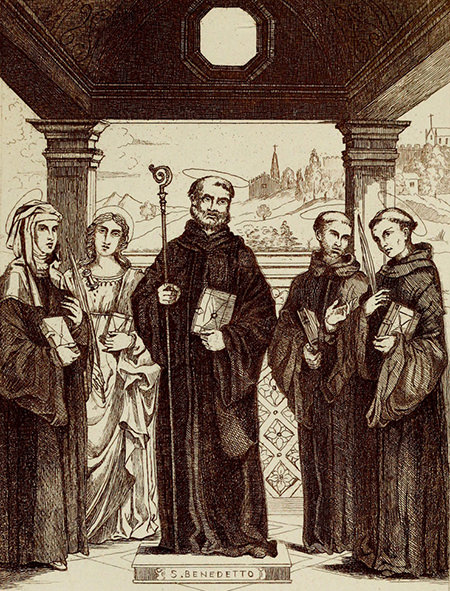 On the feast the St. Benedict, we typically see people speaking of his medal and protection from evil, but there’s so much more to this saint! One time his sister, St. Scholastica wrote to him for advice on how to be holy, but before we report his answer to her, consider the life of this saint we now venerate as a powerful intercessor.

St. Maximillian Kolbe talks about St. Benedict here and there. Two themes come out: on holiness, and on defeating the devil. It’s that part on holiness that I want to capture here. See, we tend to look at St. Benedict for being a superhero, but he had an ordinary life! Says Kolbe:

The rather widespread notion that the saints were not like us is simply false. They also were subject to temptation, also fell and got up again, felt oppressed by sadness, weakened, and paralyzed by discouragement. However, mindful of the words of the Savior “Apart from me you can do nothing” Jn. xv 5, and those of St. Paul: “I have strength for everything in him who strengthens me” Phil. iv 13, they did not rely on themselves, but, putting all their trust in God, after every fall, they humbled themselves; they sincerely repented, cleansed their soul in the sacrament of Penance, and then set down to work with even greater fervor. In this way their falls served them as steps toward an ever greater perfection and they became lighter and lighter.

Our key then, is to be close to Our Lord. Talk to him about what we want. Obstacles, especially those caused by ourselves, are just stepping stones to be worked out with Our Lord’s help. Other obstacles come from our enemy. Kolbe gives some advice on dealing with those.

On Satan’s Efforts to Destroy us

Many know the story of how St. Benedict’s own monks tried to poison him. First, they tried to poison his wine, and when St. Benedict (think of the advice above) said grace before eating, as he made the sign of the cross over the food, the chalice in which there was the poisoned wine broke, and the wine spilled out. WOW.

Keeping close to Our Lord, and Our Lord took care of the problem. But, did St. Benedict stop eating with them? No. Again, later, they tried to kill him again by poisoning his bread. I guess they thought they weren’t going to give a chance for the chalice to break again! But, again, St. Benedict said grace and a raven came through the window and took the bread!

Eventually, his monks admitted their scheme. Imagine the emotions St. Benedict must have felt! He wasn’t a cardboard stand up with no feelings! That had to be a mess. But, in friendship with Our Lord, he forgave them as Our Lord would. They turned out loving him.

How Mary uses Satan’s Traps while defeating them as well

We might be tempted to avoid people who wish to harm us. I’ve written some on this point before. But St. Maximillian Kolbe explains it further in Mary’s care for us:

I have been told that you, Father, have more than one trouble, but what can one do? No place in the world is free of worries, and if ours is truly a work of God, then it cannot be otherwise. The Immaculata allows Satan to lay a snare at her feet that she may eventually crush his head in victory cf. Gen. iii 15. I beg you, therefore, not to be troubled, but to leave all sorrows to the Immaculata. She will turn them all into good, into even greater good for her cause. Does not history teach us of the setbacks of many a superior, even in very fervent Orders? Did not perhaps St. Francis face troubles on the part of his brothers? Yet those beginnings were most fervent! What about St. Benedict, and St. Alphonsus de Liguori, and many others?

St. Benedict, whose life was like ours, with daily tasks, ordinary concerns, and troubles, learned to be with Our Lord through them all. And there, in the company of Our Lord and Our Lady, did he find the means to become one of the greats!

We tend to look at the finished saint, and think it works like advertising today. Do this and become a saint in 30 days! It isn’t like that, though, but rather through friendship with the people in Heaven.

When St Scholastica asked her brother St. Benedict what was needed to achieve holiness, she received this reply: “You must want to.”

Do you want to become a saint?

Become friends with St. Benedict! Ask him to help you work through the traps people around you set. Better yet, do you know someone struggling with trouble? Share this with them to encourage them.

St. Benedict, pray for us!

This article, Kolbe: St. Benedict’s one trick to become Holy is a post from The Bellarmine Forum.
https://bellarmineforum.org/st-benedicts-advice-st-scholastica-holiness/
Do not repost the entire article without written permission. Reasonable excerpts may be reposted so long as it is linked to this page.