The De Smet Statuary at SLU: An Alternative Approach

Editor’s Note:  This guest commentary is by Fr. Claude Pavur, S.J. on the recent controversy surrounding the Fr. De Smet statue at St. Louis University. Fr. Pavur is a well-respected Jesuit priest and scholar–formerly of St. Louis University, now at Boston College–and the Bellarmine Forum is honored to have his contribution here. 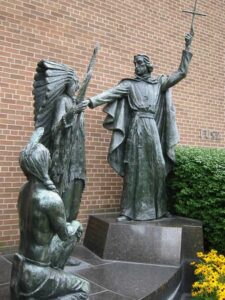 The two natives, robust, proudly upright in frame, and clearly fit for battle, are transfixed now in peace, enthralled at the spirit of the man before them. Neither is kneeling. One of them rests on his right calf and raises his left knee. The other stands nobly, holding his spear vertically as a staff, to receive a blessing through the brotherly / fatherly gesture of a hand resting on his shoulder. The stranger, someone truly Other, is speaking words that raise their hearts and minds to the Great Spirit in a way they had not ever experienced before. The man in the robe is looking the standing chief full-square in the eye, giving him his complete attention, seeing into his soul, loving him. The stranger makes both of them feel more noble, more truly who they were meant to be, more truly themselves. He points to a higher way than they have ever known. That is what they sense. That is why they keep looking. They feel the Spirit coming through this man’s words.

The Stranger stands on higher ground, as is customary for preachers and for those who are honored. He lifts a cross above his head, showing that he too is under the Lord of All. Look there, look up. Grace comes from above. To receive it there must be lowliness, humility, the ground. Even warriors must look up. Even powerful kings from across the sea must look up. Even heroic preachers must receive their graces from above.

The stranger is a friend, not a warlord, not an aggressor. The stranger has suffered many trials and gone many miles to meet them. They realize that they are the ones who are being honored.

A spectator happens upon the scene. His eyes travel from the figure seated on the ground to the noble chief, along the arm resting on his shoulder to the robed figure of the preacher. But the eyes do not stop there. They follow the upraised left arm to the crucifix held high. What can this mystery mean? Perhaps this is a breakthrough into another world, another way of being, one that is higher.

We are glad this blackrobe has come to us. He offers us what we could never have attained on our own. Not with all the battles we might win in a thousand years. This stranger is our friend and brother. He carries grace. And he serves us.

Fr. Claude Pavur, S.J.  is an associate editor of the Institute of Jesuit Sources, translating the Latin of early Jesuit documents. He has written on Greek civilization, Mark’s gospel, Jesuit education, Nietzsche’s philosophy, classical humanism, and Latin pedagogy. The Institute of Jesuit Sources has published his translations of the Ratio Studiorum (2005) and Ribadeneira’s Life of Ignatius of Loyola (2014). His doctorate is from Emory University, and he holds master’s degrees from the Jesuit theology schools in Toronto and Berkeley and a bachelor’s in classics from Yale. (Image and biography from the Institute for Advanced Jesuit Studies, Boston College)

This article, The De Smet Statuary at SLU: An Alternative Approach is a post from The Bellarmine Forum.
https://bellarmineforum.org/the-de-smet-statuary-at-slu-an-alternative-approach/
Do not repost the entire article without written permission. Reasonable excerpts may be reposted so long as it is linked to this page.