Who is this Savior Born of Mary?

Christmas is wrought with contradictions and hope. I love it. I always have to wonder just Who people think Jesus is and what His Incarnation means for us today, though. Besought with an authoritarian government, the encroachment of Marxist demoralization, and myriads of distractions foisted on us by the mass media, it is difficult sometimes to sort out our own feelings on Who the savior is, and what he comes to do.

Fr. Hardon gives us a backdrop to our story, though:

As we know, the Apostle John was the only one of Christ’s apostles who did not die a martyr’s death. He lived until the close of the first century of the Christian era. All of this was providential to ensure that the beloved disciple could write his Gospel, letters, and the Book of Revelation. Between Christ’s Ascension and the death of St. John were circulated the earliest heresies which denied that Jesus was indeed the Son of God.

That is why the writings of the fourth evangelist are such a precious treasury of revealed wisdom testifying to the divinity of the Savior. The Apostle is so explicit about Christ’s oneness with the Father and Christ’s divine nature, that critics of the faith have resorted to dismissing John’s writings as Hellenistic theory superimposed on the simple message of the other three Gospels. The heart of Christianity is faith in the Incarnation. We believe that the Second Person of the Holy Trinity became man. We believe the Incarnation is the union of the Divine and human natures. John begins his Gospel with a prologue that leaves nothing to the imagination. “In the beginning” says John,”was the Word, and the Word was God … and the Word was made flesh and dwelt among us” (John 1:1,14).

Even if the Gospel were not the last inspired writing of the Apostle, it was certainly occasioned by the rise of Gnosticism. The Gnostics claimed to know the mysteries of the universe. According to them, matter is hostile to spirit. On these terms, God could not have become man. Why not? Because God, who is pure spirit, could not have united Himself with a human body. More importantly, the Gnostic denied an objective divine Revelation that was completed in the apostolic age and which the Church, founded by Christ, alone has the teaching authority to interpret decisively the meaning of what God has revealed.

All the errors that are plaguing the modern age are rooted in Gnosticism. That is why the cardinal heresy among professed Christians is some form of Gnosticism disguised under a variety of clever names that fill so many books that are supposed to be Catholic.

It is St. John who records the dialogue between a group of Jews and Jesus. The Jews picked up heavy stones to throw at Him. So He asked them, “I have done many good works for you to see; works from my Father; for which of these are you stoning me?” The would be stoners answered Him, “We are not stoning you for doing the good work, but for blasphemy: you are only a man, and you claimed to be God” (John 10:24,33).

Jesus is the Word of God, yet, He became an infant, which is literally in latin, infans speechless one.

If God Whose very word manifests reality and creates things from nothing becomes a speechless one, is He not highlight our own powerless words? Is He not showing us our own powerlessness compared to His?

In a world that constantly tells us to be God, even to control our own salvation, the contrast is sharp — we are not god, no matter how temptingly the serpent redresses that apple from the garden… we are the powerless speechless ones.

Yet, people expect, as they did then, for God to destroy, to set the Romans straight, to destroy the people in their way…

No, Our savior came for each of us… to be our God. 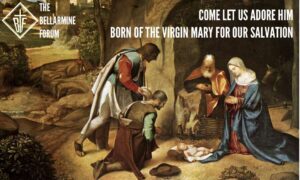 This article, Who is this Savior Born of Mary? is a post from The Bellarmine Forum.
https://bellarmineforum.org/who-is-this-savior-born-of-mary/
Do not repost the entire article without written permission. Reasonable excerpts may be reposted so long as it is linked to this page.