Who Needs a Savior? 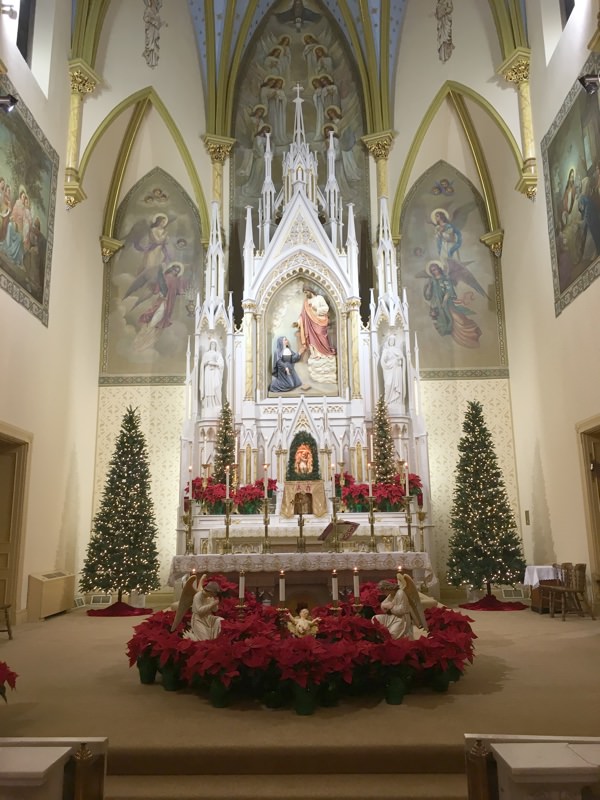 I’m glad Christmas is an octave+. It’s just too much to soak in in one day. I heard that on a recent Polish polka show, the hosts were cracking a joke that Christmas for Poles begins at Midnight Mass and they don’t leave the house for 12 days. It’s funny because it’s true. Between the ham, the Christmas carols, the gifts, the candy, and such, not to mention going for Mass, there’s enough to do and ponder. Thank God for the long feast. Among other things, it makes my wishes for a Merry Christmas to our readers timely, even though this wish for you is being posted “late” by our society’s reckoning. To them, Christmas was done when the last gift was opened and Uncle Nick passed out on the couch.

This year the contrast between popular Christmas music, popular Christmas sentiments, and those of time-honored Polish kolędy and even older english Christmas music was sharper. It is making me realize that the real problem with popular Christmas isn’t consumerism, it isn’t global warming/climate change/whatever it’s called this week, and it’s not even with cheesy TV specials. The problem, despite all the calls to “keep Christ in Christmas” is that people don’t need a Savior anymore… well… they don’t think they do. They have themselves.

One thing is apparent if you listen to Polish Christmas songs, almost every single one of them mentions the angels and the shepherds, and Mary and Joseph. Keeping Jesus Christ in Christmas really isn’t an issue — the focus is totally different. The contrast there is that the world had no idea what happened on the first Christmas. One Polish koledy, sung by St. John Paul II in New York when he visited the United States, in Polish no less, was that God became a man, and the world was sleeping. Another Polish hymn, Triumfy Króla Niebieskiego, almost taunts and jabs that God chose to sneak into the world in this way, and told a select few. Paraphrasing the hymn, it goes something like this:

“Triumph of the Heavenly King, descended from the sky on high, that spurred the shepherds, singing Glory, Glory to God, on high

“Shepherds came to investigate the cause of triumph, seeing the new light

“that God came to be among them in the flocks, born without stain of Mary to save us from hell..”

Now, the hymn has a lot more going on — I’m just giving the gist there. It’s THE theme of nearly every Polish koledy or pastoralki (carols and hymns). And why shouldn’t it be? The angels were singing, the shepherds in awe, and the world could care less (at least until Herod ordered to kill the infants). Others really emphasize, the one above contrasts that the heavenly king from the sky was born an infant on the ground, that God, who can do all became an infant, a new born child. Infant comes from the latin infans, or speechless one. God Himself made the world with a word. Yet, He becomes speechless. And the world instead goes on and on in droning music about meeting an erstwhile tryst in a coffee shop as the Christmas spirit.

But, the real problem is not the focus of Christmas on consumerism or gifts. It’s that people no longer need a savior. They have the government, they have politicians, and they have themselves. Positive thinking can solve your problems! Just think it into existence! It will happen, they tell us. That’s the gateway to neopaganism/self-worship Fr. Hardon warned of. It is dechristianized existence. People don’t say they are god today, but they treat their problems as if they were. Recently, even the Dali Lama was praised and exalted in the media for a, in my opinion, dumb comment that the news heralded as wise, when he said, “Why do people expect God to fix these problems that were made by people.”  I paraphrase him there, but that’s what people thought was wise. Idiots.

Error is our way, and we need God to right the error. We need a savior! Thank God we have one in Jesus, born to us of Mary! That people made error is the way of the world since Adam and Eve. That things are screwed up is the pain of original sin. That each of us, no matter how positively we think, no matter how much effort we expend, can never be error-free, i.e. not sin, is precisely why Jesus became Man!

We have work to do! The Christmas spirit is singing the triumph that God gave us a way to a world that works the way it should! He became one of us! We have the remedy to the world’s malaise, to the problems made by people, to broken things. We have Jesus, Our Lord! That people around us don’t even realize that Jesus came to save us, each of us, from these things — and they can’t solve them themselves, and don’t even have to, is good news! We need to make them aware of this Great Savior born to us — the Heavenly King is not so lofty that He could not be one of us to solve all these problems people made. He wants to be with us!

Thank God! Jesus is born, Glorify Him! Let us be like the shepherds, and go investigate the cause of this triumphing by the angels!

May this Christmas bring grace to you, dear readers, and May our Lord bless you and yours!

This article, Who Needs a Savior? is a post from The Bellarmine Forum.
https://bellarmineforum.org/who-needs-a-savior/
Do not repost the entire article without written permission. Reasonable excerpts may be reposted so long as it is linked to this page.