As is my Christmas tradition, I watched Frank Capra’s “It’s A Wonderful Life” once again last night. Watching the accompanying featurettes, I was surprised to learn that the film was somewhat of a box-office failure when it was released. Critics described Capra’s vision just as Old Potter described George Bailey’s idealism: “sentimental hogwash.” The director’s optimism was even derided as “Capracorn.” Apparently the public too failed to recognize the film’s greatness at the time. 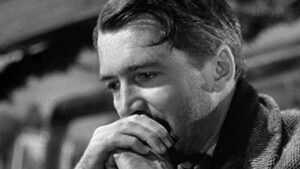 Now I am not a particularly sentimental guy, nor am I an optimist, but I buy into the message of the film because I think it taps into something true, even something distinctively Catholic. The film is honest about the ups and downs of life, the despair and joy that every person has been through. Although Bedford Falls seems like something taken from a Norman Rockwell picture, Capra does not neglect the “darker” side. Within the first opening shots, we see George Bailey’s younger brother nearly die as he falls through the ice covering a pond, only to be saved by George, who loses some of his hearing in the process. Later, as George walks out of the bright sunshine, we see Gower the pharmacist dispensing medications for his customers while simultaneously downing a bottle of booze in an attempt to anesthetize his sorrow over his recently deceased son. There are so many other moments: The townspeople making a run on the Building & Loan on a rainy day during the Depression, which coincides with George’s wedding day. As George assures his shareholders that things are not as dark as they seem, the wail of a passing ambulance causes his customers to turn and look out into the dreary wetness outside. The effect is akin to the cry of a baby in a concentration camp.

Jimmy Stewart’s abilities were on full display in the film. His downhome charm served him well in the more “sentimental” scenes, but who can forget his desperate prayer at the bar after his life has hit rock bottom? Or his statement on the bridge: “I’m at the end of my rope.” If the film is a tad too sentimental, it is more than compensated for by Capra’s acknowledgement that sometimes the darkness obscures us.

Patrick Laurence, an attorney, writes frequently on legal, cultural, and philosophical issues from Orange County, California. He and his wife, Kristen, are the proud parents of three children.

This article, “It’s A Wonderful Life”: Capracorn? is a post from The Bellarmine Forum.
https://bellarmineforum.org/its-a-wonderful-life-capracorn/
Do not repost the entire article without written permission. Reasonable excerpts may be reposted so long as it is linked to this page.