Soon we will witness again the Holy Thursday Mass and its traditional washing of the feet.  Maybe after I am dead and gone, someone may glance at this posting…and maybe, maybe, someone somewhere might one day offer a homily that gets to the core of what’s going on with this foot washing business.  It’s all in the feet!

Historically, feet were an appendage of some concern.  In a dry, dusty climate, in a world far more pedestrian than ours, feet were regularly dirtied and regularly washed.  When Abraham saw three visitors approaching, as a host his first duty was to have water brought “that [they] may bathe [their] feet” (Gen 18, 4).  When the steward of Joseph’s house greeted Joseph’s brothers on their second visit, the first task of hospitality was “to [give] them water to bathe their feet” (43, 24).  According to Abigail, in 1 Samuel, the principle duty of the handmaid is “to wash the feet of my lord’s servants” (25, 41).  And after Jesus had dined in the house of Simon the Pharisee, he rebukes his host, saying, “I came to your home and you provided me with no water for my feet” (Lk 7, 44). 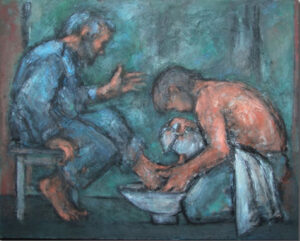 The feet, obviously, are the lowest members of the human body, the first to pick up the dirt of daily travel.  The feet also set the direction for the body.  For that reason, the Old Testament uses feet in a metaphorical context to describe the path to evil.  Proverbs has several such uses of this metaphor: “Survey the path for your feet, and let all your ways be sure” (4, 26); or, “The man who flatters his neighbor is spreading a net under his feet” (29, 5).  However, the best known use of this type of metaphor is in Psalm 119: “A lamp to my feet is your word, a light to my path” (105).

Scripturally, the path of the feet, then, is connected with the idea of sin.  Furthermore, the established problem of the feet’s gathering the dirt of daily travels suggests a specific kind of sin—actual—which is to say, the sins of one’s daily movements. Therefore, when Jesus tells Peter that “The man who has bathed has no need to wash [except for his feet]” (13, 10), he is assuring Peter that he has already been cleansed of original sin—a teaching he repeats during the last discourse, in which He promises, “You are clean already, thanks to the word I have spoken to you” (15, 3).

The central foot reference of all, in the Protoevangelium, verifies the connection between the image of feet and the reality of actual sin.  We know well the words to which I allude: “He [the offspring of the woman] will strike at your head, while you [the serpent] will strike at his heel” (Gen 3, 15).  Apparently, the best the serpent can do is strike at that part of the woman’s offspring (the messiah) which is closest to the earth.  In other words, the serpent will try to pull down the messiah through temptations of the flesh, which did indeed occur during Jesus’s forty days in the wilderness.

The importance Jesus places on His washing of the disciples’ feet assures the reader that the subject of the first part of John 13 is not merely service.  Would Jesus have said to Peter, “If I do not [give you an example of service], you will have no share in my heritage”?  Not likely.  On the other hand, if one is not allowed to cleanse oneself of the accumulations of daily sin, our chances to share in His heritage are surely jeopardized.

Edmund Miller, a graduate from Marquette University with a Master’s in American Literature, presently teaches at Spiritus Sanctus Academy, operated by the Dominican Sisters of Mary, Mother of the Eucharist in Ann Arbor, MI. He also is co-founder and president of Guadalupe Workers, a sidewalk counseling ministry operating in the heart of Detroit. He has been consistently active in the prolife movement, primarily as a sidewalk counselor, since 1987. He is married to Monica, a Ph.D. in Systematic Theology and director of Citizens for a Pro-Life Society. They have three adult children, Bernadette, Patrick and Joseph.

This article, A Footnote is a post from The Bellarmine Forum.
https://bellarmineforum.org/a-footnote/
Do not repost the entire article without written permission. Reasonable excerpts may be reposted so long as it is linked to this page.