Gay Marriage is ‘A Sign of Apocalypse’: Russian Patriarch Kiril Speaks His Mind

In America, we are all too familiar with the scene where one person speaks their mind and states an opinion contrary to what others perceive to be the “correct” thing to say. Immediately, that person will be jumped on verbally and accused of being any various number of things, “arrogant,” “intolerant,” or worse, sometimes they accuse the person of hate. Unlike Orwell’s 1984, wherein the State had to bear down on Winston, and unlike Soviet Russia, where there were places where one could speak freely, modern America has perfected the art of turning the general populace into stormtroopers for speech control.

It is ironic, in the greek tragedy sense of that word, that to cite St. Paul’s list of sins or the account in Genesis is dubbed “hate speech.” There is no hate in telling someone 2+2=4, but for someone who needs it to be 5, it is hateful, mean, uncharitable, and the rest. Speaking the truth, and speaking one’s mind is punished, not by the State, but by fellow people. For some subjects, such as sodomy, it is dubbed “hate speech” to speak truthfully of it. Yet, St. Paul says that twisting the truths revealed by God into lies is precisely what causes it!

St. Paul’s 1 Romans states the problem and cause, as well as the effect:

“Wherefore God gave them up to the desires of their heart, unto uncleanness, to dishonour their own bodies among themselves. Who changed the truth of God into a lie; and worshipped and served the creature rather than the Creator, who is blessed for ever. Amen.

“For this cause God delivered them up to shameful affections. For their women have changed the natural use into that use which is against nature. And, in like manner, the men also, leaving the natural use of the women, have burned in their lusts one towards another, men with men working that which is filthy, and receiving in themselves the recompense which was due to their error.”

(1 Rom. xxiv-vii). So, what does this mean to turn God’s truth into a lie, create a society where truth cannot be spoken, and where man is worshipped but not God? According to Patriarch Kiril, it is a sign of the Apocalypse. 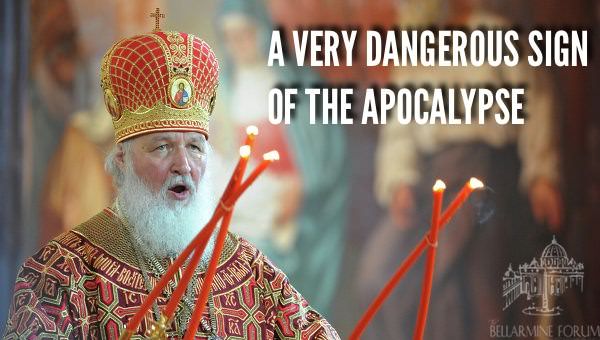 Says Kiril: “If people choose this lifestyle, it is their right, but the responsibility of the Church is to say that it is a sin before God”.

Kiril continued that the concern “is not the fact of the existence of this sin – it has always existed. But we are deeply concerned that for the first time in the history of the human race sin is being justified by law. This opens up the prospect of a dangerous development, which will contribute to the moral degradation of society.”

Kiril has read St. Paul’s first letter to the Romans, too. Good thing he speaks his mind. See the full article at Pravoslawie, the Russian Orthodox website, which is citing a report from LifeSitenews.

In 2007, Moscow mayor Yuri Luzkov denied a permit for a so-called gay pride parade, (story report here) and when stating his reason for the denial he said, “A gay parade… cannot be called anything but a Satanic act. We haven’t permitted such a parade and we won’t permit it in the future.”

That year (link unavailable), Pravda reported that Luzkov, in addition to police, was sending out “little old ladies with icons” to pray. In a move that shows true bias, MailOnline (the British paper) reported the scene this way:

Nationalists and extreme Russian Orthodox anti-gay protesters held icons and denounced homosexuality as “evil”. Others wore surgeon’s masks, which they said would protect them from the “gay disease”.

Russia decriminalised homosexuality in 1993 but tolerance is not widespread.

“We believe these perverts should not be allowed to march on the streets of Moscow,” said Igor Miroshnichenko, who said he was an Orthodox believer who had come to support the riot police. “Homosexuality is Satanic.”

The first problem here is that they labelled ordinary Christians as “extreme” and “anti-gay”…  I hardly call little old ladies with icons extreme, and they are pro-God, apparently. 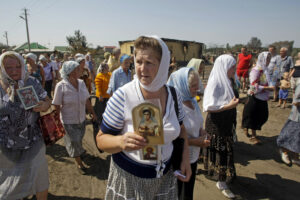 It bears punctuating that the Mail Online article is rife with biased language. “anti-gay” and extremists and “thugs” to describe people who believe what their faith has always held, from Genesis, to Jesus, to St. Paul, and all fathers and saints of the Church. The newcomers on this scene are those who hold this imbalanced, inverted, backwards view that states Christians are extreme if they believe what God says is true. Kiril is right…

As W.B. Yeats put it in his poem, The Second Coming, “…Things fall apart; the centre cannot hold.// Mere anarchy is loosed upon the world…”

Kiril is right, and God bless him for saying it: the trend of legalizing gay marriage is “a very dangerous sign of the apocalypse.” And relating to it from St. Paul’s observation, it “means people are choosing a path of self-destruction.”

The problem isn’t merely gay marriage, though… running through St. Paul’s lists of sins in 1 Romans: “Being filled with all iniquity, malice, fornication, avarice, wickedness, full of envy, murder, contention, deceit, malignity, whisperers, Detractors, hateful to God, contumelious, proud, haughty, inventors of evil things, disobedient to parents, Foolish, dissolute, without affection, without fidelity, without mercy. Who, having known the justice of God, did not understand that they who do such things, are worthy of death; and not only they that do them, but they also that consent to them that do them.”

It seems we’ve got a lot of signs of the apocalypse these days… Lord, have mercy on us!

This article, Gay Marriage is ‘A Sign of Apocalypse’: Russian Patriarch Kiril Speaks His Mind is a post from The Bellarmine Forum.
https://bellarmineforum.org/gay-marriage-is-a-sign-of-apocalypse-russian-patriarch-kiril-speaks-his-mind/
Do not repost the entire article without written permission. Reasonable excerpts may be reposted so long as it is linked to this page.