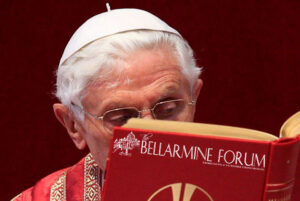 I wasn’t alive when P.Paul VI issued the Encyclical letter Humanae Vitae.  I’ve seen and heard about it throughout my life, though. For one thing, people who were in their 20s and 30s at that time say things like, “We heard about it, but the priests never said anything so we didn’t think it mattered.”  Others will relate anecdotes of being told that the Encyclical did not say what it says, and contraception was OK, “follow your conscience.”

By the time I was hearing these things, the field was already a mess. Several competing statements and sentiments were circulating in the late 80s and early 90s. “Follow your conscience” was still a common aphorism. The other I’d hear was a twist of situational ethics that said something along the lines that if you intend to have children, it does not matter if you use it or not. There’s so many problems with the statement I just recited that I’m not sure where to begin. Fundamentally, the error is clear:  using birth control is an action of not intending to have children, and in fact, it is meant to destroy the possibility of children.

Rather than digress into all the twists, the point is that Humanae Vitae answers these questions clearly, but nobody really reads it or discusses it in the context of the authority it has on the subject. Authority is not intended in the sense of an exercise of force. It’s not the “unilateral decree of a tyrant” (I’ve heard it called that or something very similar by a nun who eschewed her habit). Rather, the authority comes from the way it resonates with purpose and nature. It’s clear, and it makes sense — it rings of God’s understanding of how we are made to be.

People who understand the encyclical this way are understood to be on their soap box, or worse, like the street people — guys who walk Michigan Avenue in Chicago with poster board placards fore and aft warning that the communists have tapped the phone systems in the United States. They think we are crazy! Why?

For one thing, our pulpits were silent. Unlike soap boxes, the pulpit is the place for authoritative teaching. It is, after all, the priest in persona Christi, at the Sacraments, and in his role as homilist, that has at his disposal the grace to speak as Our Lord, who the people marveled with what authority He spoke. (Mk 1:22  “22 And they were astonished at his doctrine. For he was teaching them as one having power…”

The silence of the pulpits has turned the American Church into a melee of democratic sway and  polls. Our Lord laughed at polls. He took a poll in Mark 8:27 (“Who do men say I am?”). None of the answers were correct. Yet, misguided sheep rely on them. A comment in the article at Crisis, from Kacy, linked to this poll at a site title “Women in Theology.”  That article makes a point of attempting to undermine Paul VI, by pointing out that a majority of the commission studying the matter of artificial contraception concluded — by taking a poll no less — that: “only four members of the commission dissented from the majority’s conclusion that artificial contraception within marriage should be allowed.” (id.) In other words, the “poll” of a matter already known by natural law got it wrong again. Polls don’t determine truth.

Polls of idiots give idiot opinions.

For my own humor, I laugh that the site makes reference to the ominous sounding move made by “Jesuit John Ford” to issue a “minority report.”  Funny stuff. Polls are hilarious for just how badly they miss the mark. It took St. Peter to state the obvious:  Jesus is the Christ. Polls can’t determine truth, but they do make people feel like they have authority to propound answers because they can say someone else is cheating, too.

People who saw the truth of Humanae Vitae have been left to soap boxes — just one more category of answers in the poll. Or, in another sense, left as a “minority report” among the gladiators and lions. Our own Bellarmine Forum, founded contemporaneous to the issuance to Humanae Vitae, has always pointed out the observation that people wallowed in ignorance because the pulpit was silent. In many opinions, you get the sense that, at times, the pulpit was confusing to the point of being wrong. Even more recently, if money speaks, then the pulpit says the wrong thing. Recently on our Facebook page, we linked to a post at Rorate Coeli that the Bishops had given $5.3 million to a contraception-providing, abortion-lobby “charity.”  Not only was the pulpit silent, it seems to be confused.

Another comment on Professor Rice’s article at the Crisis website, by Clara, really makes clear that the silence and confusion is contributing to the destruction of lives and families. Says this comment:

I am a broken hearted mother of six who has seen my own children, to whom I taught the true Faith straight from the Catechism of the Catholic Church, decide that “Mama must think she’s more Catholic than the Pope”, when their CCD classes, taught by disobedient catechists, watered down that Truth to make it fit the disobedience they lived. My children have paid for the “Truce” by believing the lies taught them in their CCD classes, and I pay in tears.  I don’t understand why, now that we have seen the result of this “Truce”, “philosophers” and “theologians”  like Gary Gutting are not removed from their positions at Catholic Universities, nor why the Universal Church does not eliminate the title Catholic from the University and eliminate all funding, as well.

The kids who mocked that the mother was “more Catholic than the pope” were speaking from ignorance. The Pope agreed with the Mother. But, for some reason, people today still think that the ideas of Humanae Vitae are akin to the messages of the soap boxes and placards shared by street people in major cities. Or worse, they think it’s a mere “minority report.”  We aren’t the crazy ones, though. Just like the polls that failed to see Jesus as God right in front of them, these people are ignorant of how smart Humanae Vitae is at protecting them from the culture of death. It all starts at contraception.

Our Campaign for Humanae Vitae™ is here encourage the pulpit to teach it straight. Read the entire text of Humanae Vitae here or on the vatican website.

Join us crazy people who stand on our soap boxes and tell everyone that Humanae Vitae was right! Sign our petition for the Campaign for Humanae Vitae!

This article, Humanae Vitae was the Soap Box Encyclical is a post from The Bellarmine Forum.
https://bellarmineforum.org/humanae-vitae-was-the-soap-box-encyclical/
Do not repost the entire article without written permission. Reasonable excerpts may be reposted so long as it is linked to this page.