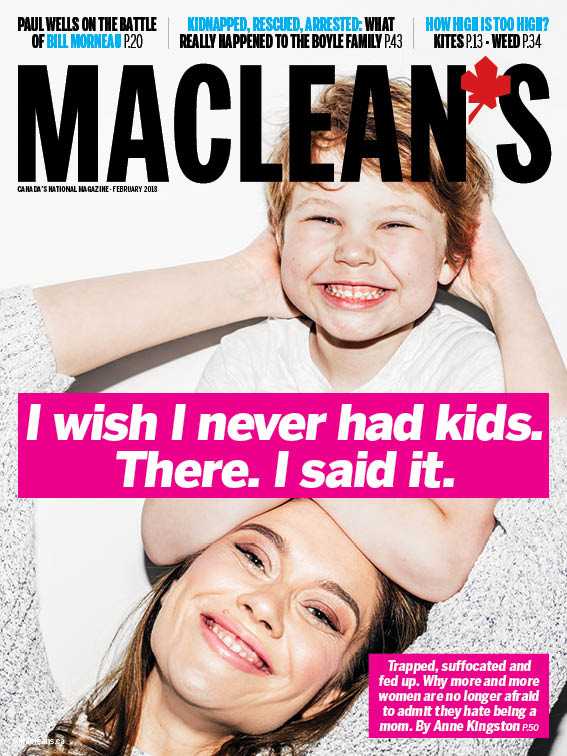 The cover of the February 2018 Maclean’s magazine (a Canadian publication) features a smiling woman holding a young smiling boy over her head. If you did not read the text yet, it looks like fun. She looks happy. But, emblazoned across her face is a bold pink banner that reads “I wish I never had kids. There. I said it.”

I guess one could make the argument that if someone really feels that way, they should say it and discuss it. On the other hand, we have to consider the drive of a magazine to make it the front cover work.

I think this is something beyond the Marxist attack on the family. This is a push to normalize these temptations and dark thoughts.

There’s some things that compel common imagination. As a young boy, it was the “Gifts & Gimmicks” ads in the back of Boys’ Life magazine. I could spend an afternoon day dreaming on the things I could do if I had everything on that page. Everything from x-ray glasses, kunng fu classes that could make me a deadly weapon, to the hovercraft that I could build myself.

Who doesn’t want a hovercraft?

And the x-ray glasses? C’mon! Talk about titulating the prurient in a young man’s mind…  of course we want those!

I wasn’t alone. That was brilliant advertising. I can mention those ads to any man my age now and immediately a discussion of similar day dreams erupts. It’s because those things strike at desires common to young men. How to be the best fighter, how to do something from the future, or how to see hidden things (even if one shouldn’t be looking at them!) 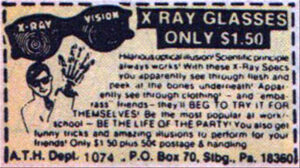 One of the many ads for the x-ray glasses 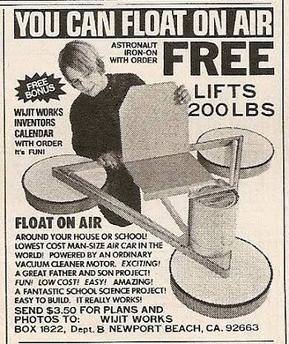 YES! Imagine floating to school on one of those!!!

I wanted that hovercraft so badly. I think only my parents understood that there wasn’t a power cord long enough to take me from home to school – I didn’t care!!!   And, that the x-ray glasses were just an optical illusion? Who cares?  I could see if there were bad things hiding in the woods because I could see through the trees, right? Who didn’t want that?

The Sea-Monkeys’ Greatest Gift to My Imagination 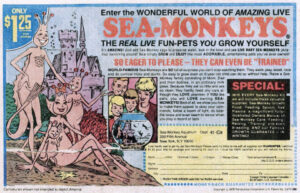 Imagine that family growing right with you! They’d be pets!

Reality did come to my young imagination when I was -finally (after many pleas over a long time)- allowed to have Sea Monkeys.

The Sea Monkeys ad was universal in appeal. It moved boys and girls alike. I’d even ask at school if anyone had any. Everyone thought it was a neat idea. Everyone except for the ones that had older siblings that bad mouthed them. But that’s what older siblings do:  they ruin things for us, right?

I finally had sea monkeys. I fed them, and they grew. I kept thinking that I’d see smiles on their faces. They’d be sea horses. One day, those sea-monkeys be big enough that I could take them to the swimming pool and ride around like a cowboy!

Eventually, I figured out that none of that was going to happen. Then, one day, the little aquarium spilled. No more sea monkeys. It was alright, though. Half of me realized that the sea monkeys weren’t ever going to be like theones in the ad picture. The other half of me still tries to talk me into getting a sea monkeys kit again. After all, maybe the first time was just a fluke, and if they had longer to grow, they’d get big like that!

But the adult in me knows that brine shrimp don’t wear crowns, and they aren’t sea horses…  I’ll never really be a water cowboy if I bet on Sea-Monkeys.

THE FREAK SHOW IS NO MORE 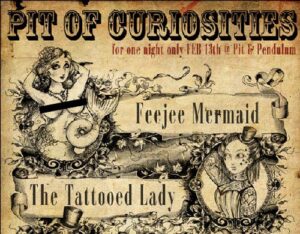 I was sad last year when Barnum and Bailey announced it was closing. Granted, I was more of fan of the Russian circus when I was a kid. They had a dancing bear, and the guy that rode around in a small globe on a motorcycle…  but I always heard about the side shows.

Ripley’s Believe It or Not was a feature page in one of the magazines I had as a child. I can imagine that is as close as I got to a real freak show. Well, there were always rumors and myths of a midget colony just outside the city limits, but I was never allowed to order the hovercraft plans so I never got around to finding that midget town on my hovercraft.

Freak Shows were common throughout history, but America had them in spades. The tattooed woman, the snake charming lady, the two headed man, the African woman with lips stretched out like drums… 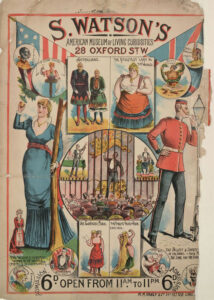 Coney Island in New York had a long running side show. In the past, you see, you had to go somewhere else to see the these oddities and freaks.

Not anymore! People have so badly wanted to be special, that they’ve made themselves freaks!

It seems that society has inverted itself.

In the past, the curiosity drove people to make a trip to the side show and pay money to see these oddities and freaks.

Today, people want others to be so curious about them, that they make themselves the Freak Show.

Individuation is the Self-Indulgent Way to Divorce Reality From Imagination

It’s called individuation. You see, people are too stupid to realize that they are unique, and politically correct speech has caused all communication to be bland and uniform. The only way to be special is to wear it on the outside. So they need to tattoo it, deform it, mutilate themselves, or otherwise make themselves into a freak.

Individuation exists in Jungian psychology, but it has grown into some sort of rite of passage. The Spruce writes for parents that this is normal:

Individuation is the process that occurs when a young adult grows into a separate self, and defines who he or she is as an individual, different from how he or she has been seen as part of the family. It is essential that parents, in spite of their well-meaning concern and heartfelt worry and questions, give young adults time to figure this out for themselves.

Easy enough.  It’s this idea that parents’ should shut up and “respect boundaries” of the young imaginative seeking to become individual.

Letting your young adult make mistakes without fear of criticism or disapproval is as important to their growth as individuals as it was, many years before, to allow them to have potty training accidents. […]  It’s very important that parents respect their young adult’s boundaries. Follow the young adult’s lead and allow them to come to you with information, rather than prodding them for answers or giving unsolicited advice. […] It was fine for parents to declare “no tattoos” while paying for college, but if a young adult chooses to tattoo, criticizing or getting angry about it is not the parents best action.

Yes, I hated hearing “those aren’t x-ray glasses” and being laughed at. It echoed in my head. But, I found out later that they were right. Same with the hovercraft… it was never going to carry me to the city limits so I could find the fabled midget town.

So it should be with this mother suffering dark thoughts…  somebody needs to tell her it’s too late to be childless — she is a mom.

But instead, MacLean’s has turned her desire for a taboo tattoo into a rallying cry for others. MacLean’s, like those ads in Boys Life, are catering to the common imagination, and making the dark thoughts into something desirable. They are trying to encourage women to think it is OK to stay depressed and see their children as a hindrance to their fulfillment in life.

Like the parents in the quotes above, there should be a societal voice that reminds her instead that she has a responsibility to those children, and in fulfilling that responsibility to those children, she will find contentment and happiness. Instead, they are making it seem like she can’t have contentment and peace because she is saddled with children she doesn’t want.

But there should be a voice echoing in her mind that tells her she is wrong.

PUT THE FREAKS BACK IN A BOX

Instead of glorifying the freakish call of this woman “There. I said it”, MacLean’s should have not printed this. The clause “There. I said it.” serves as a damning indictment of self-admission. First, that they know it’s wrong. Second, that they know it’s not real. She’s no different than any other beguiled by the contraceptive lie. She thinks children are a hassle and should be avoided. The problem is that she’s well past conceiving and pregnancy — her children are already born! That genie cannot be put back in the bottle, so to speak.

It should not be a surprise that this is inviting the hand-wringers to come in with a “sensible” solution…  they’ll be discussing for years now the issue of parents who don’t want the children they have (as if this problem never existed before). One can see how they are opening discussion into infanticide.

It is well known among women that some women struggle with dark thoughts post-partum. Those should be dealt with as a passing issue — like any other dark thought or temptation we receive. Cared for and brought back to reality. Instead, they are making it mainstream.

Side shows like this are meant to be ephemeral and oddities, not the norm. But in this culture of everyone needs to be unique, this magazine cannot help but cater to the common imagination of dark thoughts. They instead encourage it.

This woman wants to live in a fantasyland where her hovercraft doesn’t need an electric cord, and sea monkeys wear crowns and talk. Too late for that, you’re a mom now.

MacLean’s should be ashamed. But this is how the culture war happens today. Freakish error is slowly advanced as normal. The goal is obvious: make it so everyone thinks it’s cool to say they wish they never had kids. Just like Barnum and Bailey stopping the Freak Shows…  because freaks are everywhere now. Before you know it, the shock of a body full of tattoos is no longer special because everyone has them.

So it will be with MacLean’s and others — keep pushing this idea until every parent says they shouldn’t have had kids.

What do you think? Am I making something out of nothing? Overreacting? Have you seen anything else like this lately? Tell me in the comments!

Our Lady of the Rosary, pray for us!

Mary, Virgin Mother of the Redeemer, pray for us!

This article, MacLean’s Brings the Contraception Freak Show to Mainstream is a post from The Bellarmine Forum.
https://bellarmineforum.org/macleans-brings-contraception-freak-show-mainstream/
Do not repost the entire article without written permission. Reasonable excerpts may be reposted so long as it is linked to this page.