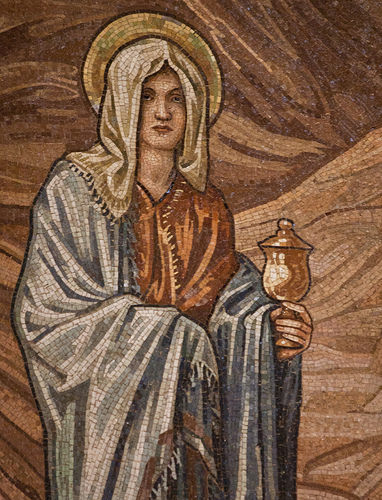 St. Mary Magdalene is one of the most inspiring figures in the Gospels, for she shows that God can turn our sins around and transform us into His Glory.

Unfortunately, she has been used by many with an agenda to subvert the powerful revelation of Christ’s love for His Church.

Was Jesus married to St. Mary Magdalene? Absolutely not.  There is no evidence in any way, shape, or form to prove this – nor does any credible scholar on the planet believe it to be true.  The Da Vinci Code is a work of fiction. There is a great book by Amy Welborn called Decoding Mary Magdalene that deals with the claims in Dan Brown’s novel, and debunks them one by one. It’s a great resource if you are interested. The bottom line is that, as Catholics, we believe Jesus Christ to be the second person of the Trinity, which mean He is God. If Jesus is God, then he was not married to Mary Magdalene in the way described in the Da Vinci Code.

Now Jesus does have a wife – the Church. Jesus is the Bridegroom, and the Church is the Bride. Mary Magdalene is in the church, so in that regard they are married.  But I digress…

So, who was Mary Magdalene?

There seems to be a lot of confusion on this issue in the Church.  Mary Magdalene, it is believed, was from Magdala. Magdala was a town on the western shore of the Sea of Galilee – and in Jesus’ day, it was known as the place to go to when you wanted a prostitute. It was sort of like the Vegas of first century Galilee. In any case, because of this, many have made the claim that the penitent woman in St. Luke’s gospel is probably Mary Magdalene (Luke 7:36-50). We all know the story, right?  Jesus is having dinner at the home of Simon the Pharisee.  A woman barges in and prostrates herself at the foot of Jesus, sobbing. There are so many tears that she washes the feet of Jesus with them and dries them with her hair, and anoints his feet with oil. It is one of the most touching and beautiful stories in the Gospels.

Of course, Simon the Pharisee is disgusted by this. He says to himself “If this man were a prophet, he would know who and what sort of woman this was”. Yes, indeed. Any prophet worth is salt knows a prostitute when he sees one. Of course, Christ recognizes the beauty of a repentant sinner when he sees one.

However, St. Luke never names the woman. But St. John’s Gospel hints that it may be Mary of Bethany. Mary of Bethany was the sister of Martha and Lazarus. In John Chapter 11, when discussing the raising of Lazarus, he states “Mary was the one who had anointed his feet with perfumed oil and dried it with her hair; it was her brother Lazarus that was ill”. So I think we can safely assumed that Mary of Bethany is the penitent woman in St. Luke’s gospel.  But, is she Mary Magdalene?

The early church believed that it was, mainly due to a homily that Pope Gregory I gave in the year 600 A.D. It is actually a very beautiful homily, but in it he basically says that just about woman guilty of a sexual sin the gospels is Mary Magdalene. And this is the image of Mary Magdalene that endured through the centuries, in art and in film. For instance, in Franco Zeffirelli’s film Jesus of Nazareth, Mary Madgalene is portrayed as a prostitute. In Mel Gibson’s film The Passion of the Christ, she is the woman caught in adultery.

The problem, of course, is that whether all these woman are the same person is not made clear in the gospels. In 1969, the church decided to clean out the liturgical calendar. If any of you have seen the play Late Nite Catechism, you’ll know what I am talking about. They decided that the liturgical calendar was overcrowded, so any saint whose life was the stuff of legend, was taken off.  So poor St. Christopher was taken off. St. Valentine was taken off. And they decided that since it could not be verified that Mary Magdalene and Mary of Bethany were the same person, they gave them each their own feast day.  So Mary Magdalene’s feast day was kept on July 22nd, and Mary of Bethany was given the same feast day as her sister Martha and brother Lazarus, July 29th.

So what do we actually know about Mary Madgalene from the gospel accounts?  Well, we know she was possessed.  (Whether she was foaming at the mouth, and her head was spinning around, like in The Exocist, who knows?) The gospels say that she had seven demons. The seven demons have usually been interpreted to mean the seven deadly sins. Biblically speaking, the number seven symbolizes completeness or perfection. So, within her person, Mary Magdalene personified the perfection of evil. This was a woman who was deeply under the influence of Satan, and imprisoned by sin. Jesus, of course, frees her from the bondage of sin and exorcises her from these demons.

She then becomes one of the most humble and devoted followers of Jesus. As we read in St. Luke’s gospel, she (along with some other women from Galilee) provided for Jesus from her resources.  It is interesting at this point to mention that whenever Mary of Magdalene is mentioned along with other women in the gospels, she is always listed first – just as St. Peter is mentioned first among the disciples. I don’t think this is a coincidence with the gospels writers. I think they meant to highlight her extraordinary role in the Theo-drama (as Hans Urs von Balthasar says).

We next see Mary Magdalene in the Passion sequence. Jesus has been betrayed, abandoned, brutally tortured, forced to carry the heavy cross to Golgatha, his feet and hands nailed to the cross, he is lifted up and suffocates to the death. And where is Mary Madgalene?  She is with him – at the foot of the cross, unafraid for herself, thinking only of His suffering. Why? As Jesus says of the penitent woman “She loved much”. She loved Him. She loved Him deeply. The grief and devastation she felt is something we can only imagine.

And it is out of love, that she arrives at the tomb early Easter morning to anoint His body. Of course, when she arrives, the stone has been rolled back and the body is not there. Horrified, she runs to tell Peter the news. He, along with St. John, hurry the tomb to see if it is true. They find the burial cloths, but no body. So they return home. But Mary – Mary – stays at the tomb – weeping. She is in agony. He has suffered a brutal death, and now his body is gone. 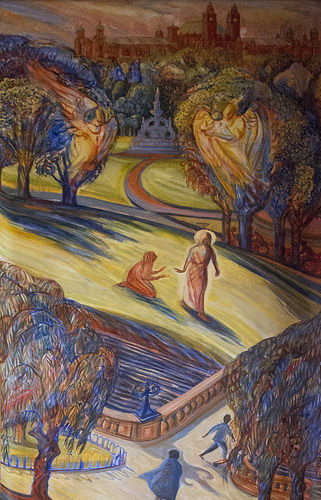 Jesus in the Garden with Mary Magdalene

So what does Jesus do? He goes to her. “Woman, why are you weeping?” She doesn’t recognize Him. So…he calls her by name “Mary”.

Mary Magdalene is, according to the gospel accounts, the first person to witness the resurrection. But why Mary?  Why her? I think it is safe to say (with the exception of course of Our Lady) that Mary loved him the most. Mary grieved him the most. And so…it is out of love, that he appears to her. 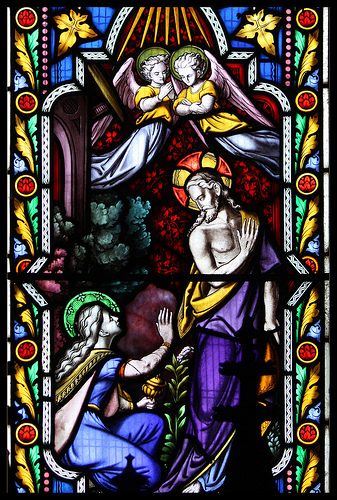 What happens next is interesting. He says to her “Do not touch me, for I am not yet ascended to my Father”. Why not touch Him, for in a couple of days, he will say to St. Thomas “touch me…and believe”? So why not Mary Magdalene?

Some argue that it is because Mary does not quite understand what has happened. She thinks he has been raised from the dead, like Lazarus, and will go on living His life as He was. And so she says “Rabboni” which means teacher. Thomas, on the other hand – gets it – for he says “My Lord and My God”. He calls her “Mary” to say “I want you to see me, as I see you – in Spirit and in Truth”. I am not simply your teacher, I am your Lord and your God.

However, I was discussing this very scene with my sister, who is a nun. She is a nun in a full habit, the most orthodox of nuns. She said that the English translation of the Greek is actually “Do not cling to me”. So what He is saying to her is “Do not cling to me. Now is not the time. Now is the time for mission. You are to go and tell the others”.

It is for this reason that St. Thomas Aquinas called her “The Apostle to the Apostles”.

It is unclear to as what happens to Mary Madgalene after the resurrection. The Eastern Churches claim she went to Ephesus with Our Lady and died there. However, there is no tomb for her there, which seems odd.  We know where St. Peter is buried, where St. Paul is, where St. James is, where St. Mark is, etc.

The Catholic tradition states that about 200 or so followers of Jesus went to Provence in France. Among them were St. Martha, St. Lazarus…and Mary Magdalene. There, she led a very penitential life. She became a mystic, lived in a cave, and survived on nothing but the Eucharist – much in the same way as St. Catherine of Siena. One might even say that her penance was so severe that she became a victim soul. And like St. Catherine of Siena and St. Teresa of Avila, she had a mystical union with Christ. It is believed that she lived until the age of 72. In the St. Maximin Basilica in the south of France, there is a reliquary that holds what is believed to be her skull.

And so today, as we celebrate her life, we ought to follow her example. What St. Mary Magdalene teaches us is the power of confession and adoration. That no matter how immersed in sin we are, Christ is there to show us his love and mercy and transform our lives. We ought to go to confession and allow ourselves to receive the mercy of Christ through his Church. And we should attend Eucharistic Adoration. We should visit Our Lord and allow him to speak to us…and to see us as we are…and call us by name.

This article, The Apostle to the Apostles is a post from The Bellarmine Forum.
https://bellarmineforum.org/the-apostles-to-the-apostles/
Do not repost the entire article without written permission. Reasonable excerpts may be reposted so long as it is linked to this page.