Demystifying Why There was Supernatural at Medjugorje, but not the Messages

News is circulating today about a decision having been made in the Congregation for Doctrine and Faith that the messages of Medjugorje were in fact not supernatural. Nobody should be surprised. Over the years over we’ve been burdened by smug believers of the Medjugorje phenomenon who look down their nose and lecture on the superior knowledge to be gained if you can decode the Little Annie secret messages with the decoder ring only dispensed to Medjugorjugugu club members. The wake of this gnostic cult has left many good intentioned, but poorly catechized, unable to explain.

The problem has always been that people only speak of Medjugorje as a singular phenomenon, as if all of it were a single event. It’s not. It has several distinct things happening:

I’ve always been irritated that Medjugorje is confused as being powered by secret messages. Look at that list and tell me what is most powerful there. To speak to a Medjugorjugugu believer, they think it is the messages and some connection to Mary. Look at that list again. Mary would be at Mass, confessions, and help pilgrims. No doubt. But remove item number 4. Could mass conversions, miracles, and all the other exciting phenomenon happen because of those things? You bet, and we should expect them (as I’ve reported here of Fr. Hardon before).

Why? Why can people not see this? Because they are confused or never learned that the ordinary method by which God delivers grace (supernatural powers) to us is through the sacraments!

Past Sites of Miraculous Conversions 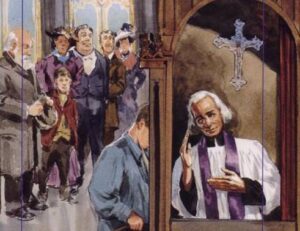 The Cure of Ars was so popular and reportedly people from everywhere came to his parish out in the sticks. Why? The confessions! Beyond Mass and his sermons, he heard confessions round the clock! And what happened? Despite Ars being considered a Siberia of sorts for priests, it became THE pilgrimage spot. Miracles came, conversions were boundless. N.B. I am not trying to overlook the prayer and fasting St. John Vianney underwent to get the ball rolling in Ars. So powerful, as I’ve commented in past posts on the subject, he said to a younger priest, “The devil is not much afraid of the discipline and hair-shirts what he really fears is the curtailing of food, drink and sleep.” (compare that to the reports yours truly posts again and again). Despite that start, the Cure is well regarded as having such an impact because he opened the confessional round the clock.

Why? Because that’s how God told us he’d deliver grace — through His sacraments.

St. Ignatius began having Masses said to convert sinners and advance the cause of his fledging Society of Jesus. So convinced in the power of the miracles these Masses would bring, that he made it part of the constitution of the Jesuits that the ordinary method to convert sinners is to say Masses for them. We’ve reported that here before. 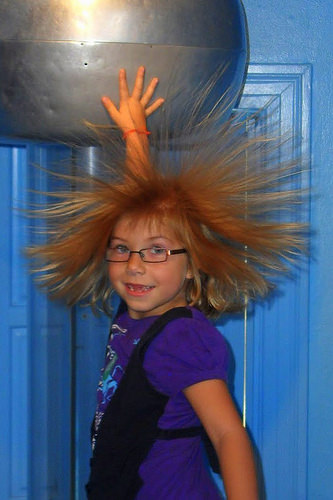 The sacraments are the high power line, the third rail, the dynamo of supernatural power, the stuff of miracles. Do you see that? But what about that tingling feeling and all the excitement people reported by going there to Medjugorje? Imagine standing close to high electricity. Your hair starts to rise, your skin tickles…  it’s powerful! Now imagine the graces surging into a church that is having confessions heard in numerous confessionals round the clock and Masses said one after another all day long…  SUPERCHARGED!  Any Catholic should expect this! In any parish! It’s elementary!

The picture to the right shows a little girl with her hair all standing out because of the electricity in that Van der Waals device she’s touching. We know that’s what happens with electricity, but sadly, Catholics cannot/will not/refuse to believe that the Sacraments do the same thing. You cannot have the sheer volume of sacraments as were performed at Medjugorje without it being something like that picture. Of course people got tingly! Of course strange miracles happened! Of course sinners converted!

It happened, not because of some seer who said she thought the Blessed Mother was going to drop baby Jesus. That’s the crime and delusion of Medjugorje. Anybody over the years with half their head screwed on straight has always said that event and the whole feeling around the seers was fake or “off.”  Sometimes the gut reaction of a person in the state of grace says it best.

Repeat after me:  Supernatural Power is Delivered By SACRAMENTS

We should not overlook the activity of people making a pilgrimage. The Church has always favored this activity, indulgenced it, and encouraged the faithful to undergo the suffering and asceticism of making a pilgrimage. Add this favor on top of the sacraments, and you’ve got a winner. End of story. We need no secret messages. Yet, the error of Medjugorje was to lead many to think that’s where the power was.

Seers and Messages are meaningless

I posted here a long time ago now a worthwhile expose of Medjugorje. Much of this had been catalogued by E. Michael Jones, and a video of him describing the apparent inconsistencies, seeming lies, and overall strangeness of the seers and messages appears on that post. I’ve always been of the opinion, mostly formed by the aghast reactions of older Catholics to the phenomenon, that something was wrong with the messages and secret cult around them.

Gnostic Surety of Superior Holiness is Error (and Pride)

Pope Francis recently spoke on the gnostic aspect. Gnostic in the sense that people think they are getting secret knowledge that makes them holier and superior to others. That’s been apparent about some of the following to Medjugorje over the years. I’ve already described why it was special above:  frequent sacraments. The Catholic church isn’t an exclusive club of special people — it is the dynamo of delivering supernatural power to all who repent, take up their cross, and follow Jesus.

Any Parish Could be Bigger and More Miraculous than Medjugorje

That same post on Medjugorje has this quote from Fr. Hardon:

“except for the charismatics, Medjugorje would still be an unknown and unpronounceable name to most Catholics. Nothing that I know of Medjugorje, the alleged locutions, prove to me that they are supernatural. However, having said that, there are priests, confessions heard there. All we need is priests to open up confessions, everyday unlimited, and you’d have a stream of people. Medjugorje, then, not because of any visions, but having come and prayed their rosary and gone to confession have gotten closer to God. fine.

[…] the problem, as you realize, is very deep. Because there is no question you’ve got priests hearing people’s confessions anywhere; Detroit, Medjugorje, San Francisco, or Paris. And people will come to confession. Right? Those that have the Faith, want to go to confession. Now there’s no doubt, you know many people; conversions, confess to the priests who are taking care of them.”

How do we spark the people gaining faith? By prayer and fasting. Unlike the Cure of Ars, however, nobody fasts anymore. In fact, references to it appear to be being removed from our very texts.

Fatima drove people to the Sacraments. Akita did, too.

Be not confused or mystified, as Fr. Dwight Longenecker is.

Earlier today, Fr. Dwight Longenecker posted this to say of his own experience at Medjugorje:

“My own opinion is that something authentic happened there at some point, but that it has been infected with human ego, greed and probably a concerted attack by Satan. The waters have been muddied. Bad stuff has now happened to discredit the events. Whatever transpires, I will accept the church’s decision and don’t really mind one way or another.”

That’s very confusing. Especially because earlier in the article he says directly: “All I can do is report my memories of that visit: People were everywhere making confessions. Mass was non stop in the church of St James in the village square.”  That explanation should have been end of story. That explains anything miraculous right there.

Don’t over state the error, as Mark Shea might be

On the other hand, Mark Shea appears to throw the baby out with the bathwater. In his winded explanation of the phenonmenon, he doesn’t seem to think the sacraments mean anything or predict why miracles came to that place. Instead, he seems to indicate that he sees God as sort of floating wherever God wilt, see if you think that’s his take with this quote:

“I have no problem believing that God, who is famously unscupulous about honoring attempts to seek him, has done any number of healings, miracles, sign and wonders at Medjugorje *in response to the faith of people who were honestly seeking him*. I’ll go further than that: I think it obviously and documentably true that he does signs and wonders for non-Catholics and non-Christians (I discuss a number of such events in Volume 3 of Mary, Mother of the Son.) This does not mean God is an indifferentist. It means that God, under carefully controlled laboratory conditions, does whatever he feels like doing. If he wishes to intervene miraculously in the life of a non-Christian, or do a miracle at Medjugorje because some honest soul is seeking him there, who am I to tell him he can’t?”

I think God went through the entire trouble of becoming Man in order to make it less ephemeral and far more like someone who loves us (of course, that’s why we make the sign of the cross). In fact, I know God did:  He made sacraments. God is kind of nice to us that way — He reveals to us in His Church how He works. It’s not a guessing game.

Now that we’ve covered the reason why there were conversions and so many signal graces there, take the knowledge and explain it to others. It makes it easier to describe what happened at Medjugorje, and it makes it very easy to explain the precise nature of the error:  people took advantage of the effects of supernatural grace normal to the sacraments and made a killing on selling newsletters, secret messages, talks (such as this one that was not supposed to happen), and piling on top of God’s gifts.

Maybe work on praying and fasting to make such a miracle in your own parish. We should expect them, after all. Jesus is just as physically present at your Mass in your parish. Fr. Hardon said as much himself as well.

Coincidentally, I’ve already seen some people say that they expect Pope Francis to deny Medjugorje because he was “prophesized” to be the anti-pope. (!) Really? Given what we’ve discussed here, it should be easier to deal with such nonsense.

This article, Demystifying Why There was Supernatural at Medjugorje, but not the Messages is a post from The Bellarmine Forum.
https://bellarmineforum.org/demystifying-why-there-was-supernatural-at-medjugorje-but-not-the-messages/
Do not repost the entire article without written permission. Reasonable excerpts may be reposted so long as it is linked to this page.